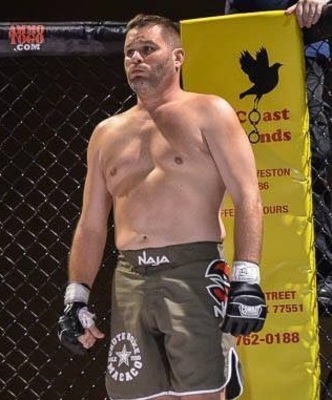 Stephen Lawhorn is ineligible for regional rankings due to inactivity.
Fighters must have at least one completed MMA bout in the past two years to be ranked.

Stephen Lawhorn was born in Carthage, Texas on September 13th 1973 to Charles and Leisa Lawhorn. Stephen Graduated from Carthage High School in 1992. In high school Lawhorn competed in both football and baseball, and had a love for extreme sports as well and would frequently participate in bull riding and other rodeo activities. In 1995 Stephen had his only child a male Tyler Lawhorn who still lives in East Texas. After graduation Stephen moved to DFW area to work and relocated to Lindale area in 1999. After a few years of running his own business he took some work in Galveston, TX following Hurricane Ike where he still resides today. In 2010 Lawhorn began training in Mixed Martial Arts at Premier Martial Arts under Al Garza. The two would eventually create a mixed martial promotion in 2012 name Superior Combative Championships also known as SCC. On July 19th 2012 SCC had its debut show in Galveston, TX and has remained there since. In 2013 Stephen began training under Jorge "Macaco" Patino at Macaco Gold Team in Sugarland, TX just outside of Houston. At 40 years old Macaco still competing at a high level in MMA  inspired Lawhorn to add one sanctioned cage fight to his bucket list. At 41 years old on November 21st 2014 this item was checked off when Lawhorn defeated 43 year old Robert Garcia at Galveston Island Convention Center by TKO RD 2. When asked if he would do it again he kindly replied I don't think so. Lawhorn currently continues to promote and help other MMA fighter all over the State of Texas and continues as match maker and President of SCC. Update

In 2015 SCC moved the show to Bryan College Station.Lawdog moves back to East Texas where he currently lives on a small farm he intends to remodel, in 2016 Stephen semi retired from MMA after meeting his now wife Shannon whom he married inside the cage at his last event as the Promoter. Stephen is raising four kids with Shannon and took them as his own. In 2018 Lawhorn traveled one more time when he took fighter Tim Lashley to Wisconsin to fight in a match in the Northern Indian Reservation. As of 2020 Lawhorn’s family has returned to Carthage, Texas their home town and only an hour away from Lawdog, he has since reconnected with old classmates and is excited to spend as much time with them and family doing things he always enjoyed.