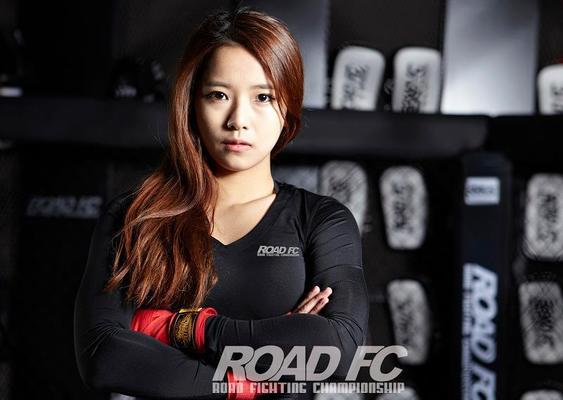 Ga Yeon Song is ineligible for regional rankings due to inactivity.
Fighters must have at least one completed MMA bout in the past two years to be ranked.

Ga Yeon is an Atomweight fighter for ROAD FC. Her training background is in Hapkido and Kickboxing. She gained widespread recognition when she defeated two males in her amateur kickboxing career.  Song trains in MMA with Team ONE at the Official ROAD FC Gym under the guidance of National Wrestling Team medalist and top Korean MMA fighter Seo Doo Won.

Before going into MMA she was studying Security Services at Kyungwoon University and at one point was close to joining the Korean military special forces.

She caught the eye of ROAD boss Jung Moon Hong at a ROAD amateur event and he saw the potential makings of a star. He would sign her to promotion and begin shaping her stardom. Song was a fill in ROAD Girl round card holder when one of the regular ring girls had to pull out of the event late and instantly became a media sensation with her stunning good looks and charisma.  She has been appearing constantly on television shows, including regular appearances on XTM's "The Crying Fist" and a former regular cast member of the variety show "Roommate".

She made a successful debut at ROAD 17, beating her opponent everywhere the fight went before finishing with ground and pound. After this fight she began to receive death threats and even had a person stalk her, she ended up requiring psychiatric care. A few months later she made her sophomore appearance at ROAD 20 where she took on the significantly more experienced DEEP JEWELS veteran Satomi Takano. Ga Yeon had success on the feet but was taken down and dominated on the ground, eventually being submitted from a vicious kimura while stuck in a mounted triangle.