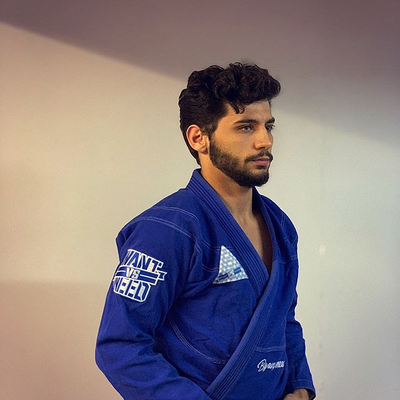 Leon Larman was born on April 18, 1997, in the southern France city of Montpellier, and growing up further north in the small town of Brissac.

Although not a sporty kid during the early stages of his childhood, Leon took a shine to jiu-jitsu when he first accompanied his father (an avid BJJ hobbyist) to a grappling academy at the age of 9. Closely followed by coach David Touzet, Larman quickly showed potential for the sporting aspect of this martial art, earning a silver medal at the 2013 European Championship as a juvenile.

After earning his purple belt, Leon moved back to Montpellier for a short period, then training under Julien Castanier, who promoted the young athlete to brown belt. Larman’s studies would then lead him to Toulon, where he partnered up with one of France’s most prestigious black belts, Mr. Julien Gaillard, who awarded Leon his black belt midway through 2018.

Shortly after being promoted to black belt, Leon Larman decided to pursue his true passion – Jiu-Jitsu, and place his academic studies on hold. This mission drove him to California, USA, where he befriended Caio Terra, becoming a part of the well-known coach’s workgroup at the Caio Terra Association headquarters.