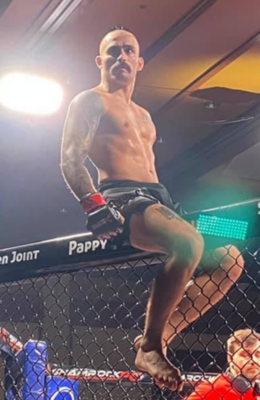 Erion Zekthi is 10-0 Ammy Bantamweight who stepped up to Featherweight his last to ammy fights for a challenge. You can verify his record on mixedmartialarts.com.

Zekthi made his pro debut against Jackson-Wink product Trevor Ward on September 9, 2016, and emerged victorious with a second round submission. Zekthi took on Demetrius Wilson in his second pro fight on December 2, 2016. Wilson edged out Zekthi in a razor-thin split decision. The loss was Zekthi's first in MMA, amateur or professional.

Zekthi announced in February 2017 that he re-signed with Shamrock FC for a multi-fight deal. That's the same promotion where he fought his first two professional fights.

Zekthi picked up a split decision victory of his own against Scott Ettling on June 2, 2017.