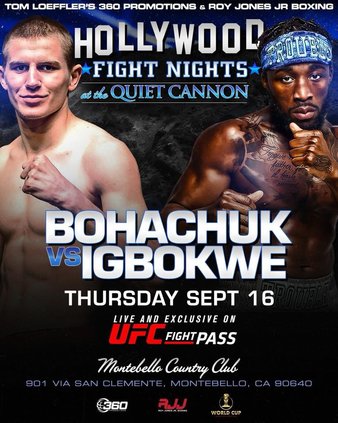 Watched the Hollywood Fight Night's on the UFC Fight Pass Site live and was very impressed with the footage yesterday evening... Tom Loeffler regularly creates excellent Boxing Events, even when producing small hall/venue productions... He always comes across as a humble, personable, intelligent and highly knowledgeable industry professional and he promotes his fighters very well... I thoroughly enjoyed watching the Event and a big  thank you to Roy Jones Junior for also getting himself involved and assisting with promoting the Boxing Event and the UFC for giving viewers access via their Fight Pass Website...Excellent Fights, with some excellent performances from several of the Boxers 👏👏💯🤔🥊👊🤑🧐👍

Serhii Bohachuk put in a fantastic display in his victory over Houston, Texas based Nigerian, Raphael 'Trouble' Igbokwe yesterday evening, at the Hollywood Fight Nights Boxing Event and starred in the Main Event... He broke down the previously never Stopped Igbokwe in 6 completed Rounds, by applying constant pressure with accurate, hard punches, which ultimately created a cumulative effect on Igbokwe, where he had to be saved from himself in the end... The Stoppage occurred at just about the right time, even though I had Rounds 7, 8 and 9 covered with the Bookie... Bohachuk is a dangerous, highly equipped and immensely determined Super Welterweight Boxer who appears to be very close to earning himself a World Title Shot in the next 12 - 18 months... At 26 Years Old, he has time on his side to continue his progression and he his in a good position career wise with his most recent victory... Congrats to Serhii for the performance against Igbokwe, including the Stoppage victory and credit to Manny Robles too, his Boxing Trainer, for his tutelage and guidance to Serhii, especially after his return from his defeat to Brandon Adams earlier this year, when he was Stopped in the 8th Round, after going into that Round of the bout ahead with the judges... 👏💯🤔🥊👊🤑🧐👍

Tapology members can make predictions for upcoming MMA & Boxing fights. Hollywood Fight Nights is closed for new predictions. 95 total members made predictions on this event, breaking down as follows below.