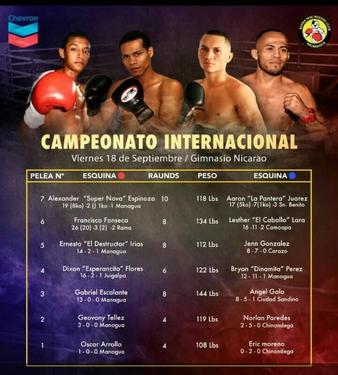 Espinoza vs. Juarez
"The official Tapology discussion thread for the event!" (2 weeks, 6 days)

Just an opinion, but if Lesther Lara can last past 3 Full completed Rounds against Francisco Fonseca, he will have done really well... Fonseca is a fringe level World rated top 50 fighter in his weight class, which is at Super Featherweight / Lightweight and he has fought against some of the World's best Super Featherweight Fighters over recent years and will have notably picked up valuable experience... He may have either lost, or Not got the decision on every occasion he stepped up, but he has always fought his heart out to compete and give his opponent a tough fight, whether it be Tevin Farmer, Gevonta 'Tank' Davis, Alex Dilmaghani... Granted, up and coming excellent prospect and World Title Contender, Ryan Garcia just blew Fonseca away inside a Round back in February of this year, which was just a stunning performance on the night from a World Class operator in Garcia, but Fonseca has already had a bounce back 1 Round KO Win last month against Eusebio Osejo, but this is the same Osejo who beat Lara clearly by an 8 Round UD in February 2019, so Lara, in my opinion, isn't really in any way shape or form, capable of causing Fonseca any problems this evening, (unless Fonseca has an off night of course) and I expect Francisco Fonseca to get the Stoppage, most probably between Rounds 2 - 3, Round 4 at a push... That is my prediction 🤔🥊👊👊🥊👍

Former multi-time world title challenger dubbed “The Nicaraguan Nightmare” Francisco Fonseca moves to 27-3 after a second round knockout in Nuevo, Nicararo Managua in his homeland of Nicaragua.

I did say that Lara would struggle to get past the 3rd Round of this bout with Francisco Fonseca... Just saying... Fonseca is 2 or 3 levels above Lara in ability and still believes, along with his management team that he can Win a World Title at Super Featherweight, against any other Boxer apart from Berchelt, who is just too skilled and powerful for Fonseca to challenge... I wish Fonseca well and I admire his undoubted determination to succeed and bring a World Title of some form back to Nicaragua 🤔🥊👊👊🥊👍

Tapology members can make predictions for upcoming MMA & Boxing fights. Espinoza vs. Juarez is closed for new predictions. 63 total members made predictions on this event, breaking down as follows below.

Leaderboard of the best predictions by member: Espinoza vs. Juarez Leaderboard