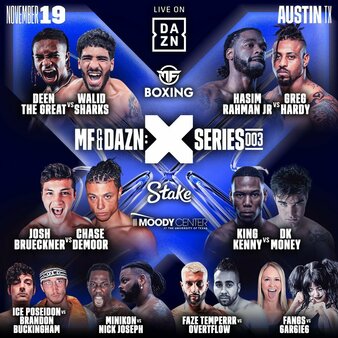 "Oooh, Better shut that off, im getting sexually aroused"

Ojuederie vs. Miller Changed from Rumored to Confirmed

Shabazz vs. Fotoohi Changed from Rumored to Fizzled

Rahman Jr vs. Belfort
Hasim Rahman Jr, DEC
I just think Rahman will use his experience here. He'll out point Vitor but I have a feeling it goes all the way

Ojuederie vs. Money
Kenny Ojuederie, TKO, R2
Kenny will walk through this guy. After Kenny had 2 straight fights ending in controversy they decided to give him an easy one so he can relax a bit.

Bean vs. Sharks
Deen Bean, DEC
This fight is a lot closer than a lot of the people in the influencer scene are saying it is. Everyone thinks this is just another easy fight for Deen to drive his stock up but I don't think it is. Walid arguably beat Adam Saleh when they fought and everyone rates Adam so highly. While in the end I think Deen wins I don't think it will be as easy as people say it will be.

Buckingham vs. Denino Changed from Confirmed to Rumored

Buckingham vs. Denino Changed from Rumored to Confirmed

Brueckner vs. DeMoor
Josh Brueckner, TKO, R2
Nice to see some fights getting full sanctioning on these events. Although that doesn't mean it's competitive. Brueckner is a serious fighter. Has an extensive MMA background and even won a fight on the undercard of KSI vs Logan 2. Chase looked real bad on the undercard of Austin vs Gib. Josh will handle him easy.

Buckingham vs. Denino
Brandon Buckingham, DEC
2 guys with minimal experience pre-fight. Not much to go off of though I know Brandon has some combat experience as a grappler and I believe has been training for this longer so I'll take him

Duban vs. Pongracz
Jessica Duban, DEC
This fight will probably suck although it does have full sanctioning. I'm taking fangs just cuz she has been training longer

Minikon vs. Joseph
Malcolm Minikon, DEC
Fight with some personal beef however it also to me is one of the least interesting fights on the card. Minikon should win as Joseph has little to no experience but I don't think he's good enough to get a stoppage.

Rahman Jr vs. Belfort Changed from Confirmed to Cancelled

Brittain vs. Oliveira
Thomas Oliveira, DEC
Solid fight appearing out of nowhere. Overflow looking for redemption after his loss to Faze Sensei in his only fight. Has some combat experience but Temperrr might be too much for him as he's looked pretty good in his fights even including his loss to Slim.

Rahman Jr vs. Hardy
Hasim Rahman Jr, DEC
I hope Greg Hardy has to be carried out on a stretcher.

Duban vs. Pongracz Changed from Confirmed to Cancelled

Rahman Jr vs. Hardy
Hasim Rahman Jr
NC, hits him while down.

Rahman Jr vs. Hardy
Greg Hardy, TKO, R1
That 94lb weight difference might have a affect the outcome slightly!

I think Greg Hardy's additional weight will hurt his stamina and cost him the fight.

Shabazz vs. Muhsein
Nurideen Shabazz, DEC
I think this will be a fast, scrappy and sharp shooting fight, I'm excited the most for this, as both guys have decent skill in the ring, I expect Walid to throw less though, and rely on counters, which I think in a close fight, the workload will go to the victor, Deen will get the hard win, could potentially be a SD.

Brueckner vs. DeMoor
Josh Brueckner, DEC
I think that Demoor, will rely on his hight and power, but will lack skill and cardio, Josh will be timid, but will attempt to box smart, and not get caught, he'll also want to rely on clinching to slow Demoor down over time, and get a UD win.

Rahman Jr vs. Hardy
Hasim Rahman Jr, TKO, R3
Greg has got insane power and size, but he'll likely gas out and get beat late in the fight, I'm saying round 3, but it could be round 4, all Hasim has to do, is rely on his speed, and elusive style to get around Hardy, which shouldn't be too hard considering, he's the boxer.

Ojuederie vs. Miller
Kenny Ojuederie, TKO, R1
Kenny will attempt to run through DK, DK will crumple, maybe swing wildly, and eventually get caught, Kenny talks a lot of smack, for a guy, who's 0-2 and pays off judges.

Brittain vs. Oliveira
Thomas Oliveira, TKO, R3
Temper won't rush early, and will likely attempt to outbox Overflow, and ultimately will pick him apart enough, to get him the TKO in the 3rd.

Denino vs. Buckingham
Brandon Buckingham, TKO, R1
This will be an awful fight, but Ice seems like he's taking it serious more, I feel he'll bring the pace, but he has awkward footwork and bad defence, I think Brandon will pick the shots and hurt Ice, and get him out in the first.

Minikon vs. Joseph
Malcolm Minikon, TKO, R2
Minikon will likely toy with him and then, piece him up, get him tired, and get him out of there in the 2nd.

Brueckner vs. DeMoor
I prefer Josh Brueckner at -1600. He has a ruthless overhand. Brueckner isn't about to charge the performance.

Denino vs. Buckingham
I am all over Paul Denino at -165. He has a final crucifix. Denino will likely capture the unthinkable.

Shabazz vs. Muhsein
I take Nurideen Shabazz at -450. He has an ironic spinning back elbow. Shabazz isn't about to ignite the performance. Guaranteed!

Minikon vs. Joseph
I go for Malcolm Minikon at -1400. He has a lascivious vulcan nerve pinch. Minikon must scramble the foe.

Rahman Jr vs. Hardy
I am enamored with Hasim Rahman Jr at -600. He has a bonkers counter left and an ironic triangle choke and also a talented liver kick. Rahman Jr should claw the humiliating defeat.

Really tight round but I think I'm leaning 29-28 Minikon

You won't have to wait too long.  They up next