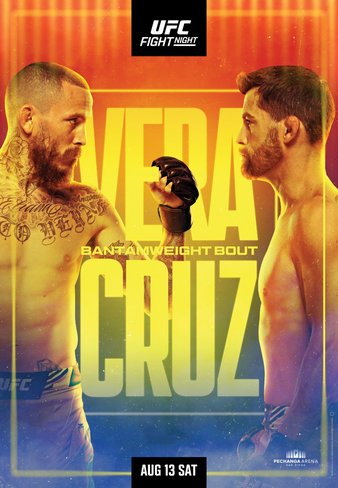 I agree about DC, he can be fun but usually it's not what I'm looking for in a commentary team, I really like play by play which is something Felder does a lot and Cruz is very good at analyzing what a fighter does immediately into the fight, it's really insane tbh. Anik is the perfect promo voice, the **** he says can sometimes be literally perfect for a promo and his voice is very good in general.

Sure they've had their slip ups before, Felder with the whole Eagles chant after Daukaus KO's Shamil, was a bit cringe, Cruz with the " he's trying to tire Khabib out by making him miss" during the Khabib vs Conor fight and Anik with the custody battle and a few other **** he brings up that don't have much to do with the fight itself but if I want good commentary, I believe those three are the best for sure. I don't mind Fitzy too much it's just I believe Anik is the better golden voice guy.

I'll say this though, when I first started watching, and I notice this too with people who don't watch the sport as much, they prefer DC and Rogan's more funny and casual style commentating. Rogan saying the same sentence every three fights, the things that became a meme at this point, **** like "did you know Alexander volkanovski used to weigh 300lbs". But overall you can tell they don't take their jobs as seriously as some other people, especially the people that are still new to the job (Cruz isn't new to the job but he was an analyst that transitioned to commentary so he's still rather green in commentary I believe)

Also, Bisping is mentally ill, sometimes I open the live UFC stream and the second I hear him I contemplate on not watching the event at all. I'm not gonna go in detail as to why I don't like him as a commentator, but I will say I hate when commentators openly score fights whilst they clearly don't know the rules very well, It's most likely what makes fans who aren't paying as much attention call closer fights robberies, because dumbasses like Rogan and Bisping will openly say a round should've went to someone when it isn't necessarily true

Lmao hearing bisping try to score fights live is the most painful thing ever; he’s always so wrong

Ik bro, I swear every time he's scoring fights, he ends up being wrong and the fight is immediately casted as a robbery because it went against what Bisping is saying, the guy has too much credibility amongst some fans

I think Angela Hill is a nice person, just not a great fighter.

The only commentator I don’t enjoy listening to is Rogan. He just says so much dumb stuff. Cruz is actually fight smart and calls things how they are going even though I think he’s in his own world sometimes. Rogan just says stuff to say it

DC says some silly stuff too but he balances it out. I think he’s actually been able to contain his biases recently, when Phil Hawes was beating the snot out of one of his friends DC stayed completely neutral. I was impressed

All of the former fighters are decent broadcasters tbh. Bisping just likes to throw fuel into the fire sometimes and piss off the fan base. Felder does it sometimes too

Onama vs. Landwehr
David Onama, TKO, R1
nates aggression will get him clipped.

Jauregui vs. Lucindo
Yazmin Jauregui, TKO, R3
im excited for this fight. yazmin is very exciting to watch i think iasmin can get on top and hold her down tho. no bet for me

Clark vs. Murzakanov
Devin Clark, DEC
i have no idea who wins idc

Lipski vs. Cachoeira
Priscila Cachoeira, TKO, R3
ariane might be getting pretty points, these gals have damn near the same wins and losses. and if shes really strugggling with covid symptons i cant take her.

Brzeski vs. Buday
Martin Buday, DEC
lukasz got popped for roids and hes under 30 pounds.

Nunes vs. Calvillo
Nina Nunes, SUB, R3
cynthia almost retired at the end of her fight. everyone in the world is saying cynthia wins but the odds dont match what everyone says.

Benítez vs. Ontiveros
Charlie Ontiveros, TKO, R1
charlie is a glass cannon. im just taking a dog shot. he throws wild **** and hes wobbled kevin holland and steve garcia. i dont trust moggly's chin to take one of those shots. moggly is 100% the better fighter.

Zalal vs. Blackshear
Da'Mon Blackshear, DEC
youssef suffers from favorite disease. hes been the favorite in almost all of his fights and he hasnt delivered at all.

Jauregui vs. Lucindo
Yazmin Jauregui, TKO, R3
I think we got a potential undercover banger on our hands right here. After watching tape on both of these girls it seems they both just prefer to throw hands then do much on the ground. They're both young and hungry and are out to prove themselves in what could be one of the twos only shot at the UFC. I gotta go with Yazmin though. She's tough man. She handled those three girls in her last fights (she was in a tournament) with almost ease. It could go either way. I just hope it doesn't turn up boring due to nerves, etc.

Onama vs. Landwehr
David Onama, DEC
I actually think this fight is gonna be closer then the odds and everyone else think. And although I'm going with the same winner as mostly everyone else I don't think Nate gets knocked out. I see them both mixing in some stand up and groundwork and this going to decision.

Vera vs. Cruz
Dominick Cruz, DEC
I've always been a Dominick Cruz fan man. He's so well rounded of a fighter it is unreal. Chino is well rounded himself however pushes stand-up more then Cruz. I think this is gonna be a great fight and I think Cruz creates problems in this fight with his Wrestling. They're both gonna eat punches here and there but Dom has the clear advantage with his ground work. Cruz's striking has only gotten better since the Cejudo fight in my opinion, I think on that time off between that fight and his next with Casey Kenney he worked on a few things. I'm rolling the dice here. 🎲

''ANGELA HILL IS A NICE PERSON'' WHO CARES??

I dont care if she is a nice person, I care about fighters skills, and Angela Hill is goin to lose that fight, Loopy is easy money

Some parlays I am playing if anyone is interested

I very rarely bet MMA nowadays, but I feel confident enough about this weeks picks (across all 3 cards) to drop a few of the many parlays I am playing. I made a decent amount last week so have a bit of bankroll to play with. Here is hoping for a repeat. Good luck if you are thinking of tailing any of my bets

Does anyone agree that this card is fire?

I saw a comment somewhere that really struck me. Everyone is blown away by Chitos last fights, me included. But the key thing is each of those opponents gave Chito the exact fight he wanted. A stand and bang kickboxing match. 100% sure that Dom is not going to give him the fight he wants. And that means Dom is likely to win.

I'll be suprise if Dom wins, He got dropped bad in 3 of his last 4 fights, Chito is a savage and is the moxt violent man Dom ever fought, I think people are overthinking this, I'm chucking a bit of money on Chito

Even look at this one, Pedro almost killed Cruz in the first, Chito is so much more dangerous then Munhoz. Props to Cruz if he get passed Chito

Where can i watch past UFC Fight Nights/tape study? Should i go for ESPN Plus or UFC Fight Pass? What's the difference?

David Onama vs Nate Landwehr
David Onama, TKO, R1
Landwehr is an absolute wild man which can be a blessing and a curse but in this match up it will be 100% of  a curse for him with the power that Onama packs in his punches. Landwehr was looking good in his last fight but that was against a Ludovit Klein who was very overrated in my opinion, can see this fight becoming a brawl early on and Onama finishing Landwehr up against the cage with power hooks like he did with Benitez.

Rusty was in Chito side 1 minute ago, and now is acting like '' how u can pick Vera??, Cruz is the Bantamweight GOAT'' listen if one of u goes with the old man(Cruz) who is not effective with his defense as before, who has not cardio as his opponent, and he doesnt hits hard as his opponent... Good luck on that side... CAUSE U GONNA NEED IT¡¡ Vera is goin to finish that fight, and when that happens all of you re goin to retire Cruz, u re so predictable like this fight.