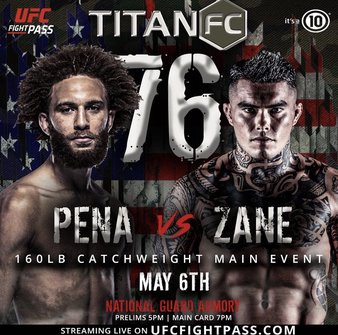 Pena vs. Zane
Luis Pena, SUB, R3
so he didnt sign with aca?

@reynolds his fight is off because of visa issues


Asa Ten Pow pulled out against another guy from the Goat Shed Gym in Ryan Kuse will be interested if Sean Mora can ground the kickboxer and hold him down.

"This is the internet idgaf what anyone thinks of me.." - Me

I remember those days where Titan FC was one of the best regional circuits, and fighters like Tim Elliot, Shorty Torres, Jason Soares, Brett Johns, Rafa Alves, Jason Jackson, Belal Muhammad, Raush Manfio, Said Sowma, Ricky Simon, Andre Harrison. and Sodiq Yussuf were champions or challengers for the title of Titan FC before stepping on big promoters such as the UFC, Bellator or PFL (WSOF).

Today, Titan FC has pretty much become mostly a Can Crushing show (although there are still a couple of decent fights on the cards) either due to abusive matchmaking or last minute cancellations of some of the scheduled fighters (not they have been few in the last time). Titan FC has allowed a lot of ground to be taken away in terms of promoter of prospects by LFA and CFFC, that although Legacy FC together with RFA have always been the main exporter of talent for the UFC and CFFC has gained strength in the last 5 years, the Miami, FL circuit (Titan FC) has produced no new prospects in the same state where ATT, Sanford MMA and MMA Masters are located.

The positive thing that I can highlight is that this card looks very good in terms of matchmaking (of course there are some fights where there is a clear favorite, but nothing of a 1-0 fighter against a 2-18 fighter) it would be good for Titan FC to recover the consistency he had before, of his current champions Dilano Taylor was in PFL CS, Murad was in DWCS and firefighter Lukowsky despite only 3-0 record at 35 years old has an interesting history. I also remember that in these months Muhammadjon Naimov was going to fight Azizbek Satibaldiev, which sounded like an interesting fight but was canceled due to what I imagine were visa issues. The truth is that the events in the Dominican Republic seem excellent to me (Titan FC has always had that tropical theme) and the one that is UFC fighters like Marquardt and now Peña fighting in the promotion is very good, but Titan FC needs to avoid can-crushing little disguised that there was in the last year.

Lewis vs. Bowen
Richie Lewis, TKO, R1
he had a draw with tyson duckworth. thats all i need to know

Pena vs. Zane
Zach Zane, DEC
Can't root for Pena and I don't think he's that good either. Vartanyan would've demolished him. Zach Zane is many levels below him but I think this will be a competitive fight.

Lewis vs. Bowen
Richie Lewis, TKO, R1
Richie moved from Goat Shed to Sanford MMA. The guy is legit, would be shocked if he doesn't ultimately make the UFC but they gotta get him those fights to stay active. Last fight was 8 months ago.

Somchay vs. Bunsie
Jason Somchay, TKO, R1
FOTY. UFC must sign the winner of this.

Atleast alaska fc guys bring the fight. They are usually kill or be killed

Lewis vs. Bowen
Richie Lewis, TKO, R2
Richie is a good prospect. High level wrestler and he switched from goat shed to sanford

Mayol vs. Morrison
Richard Mayol, DEC
Not sure why they’re rematching after just fighting as amateurs but cool ig

Ten Pow vs. Mora
Sean Mora, DEC
I’m always hesitant to pick goat shed guys but this dudes got a lot of experience. Ten pow is a good striker tho

Mayol hasn’t fought in over year since that match. Morrison won 2 ammy belts including a 9 second KO. Mayol won decisively over Daniel in that first fight but since then we have two amazing performances from Daniel. This rematch makes sense as far as merit goes. Since Daniel has improved tremendously from then.

Arturo Vergara defeats Cody Schieve via KO/TKO at 0:09 of Round 1

Richard Mayol defeats Daniel Morrison via KO/TKO at 2:12 of Round 3

Richie Lewis defeats Kelvin Bowen via KO/TKO at 1:47 of Round 2

Rami Hamed defeats Jimi Alberto Diaz Zuleta via KO/TKO at 1:22 of Round 1

Luis Pena defeats Zach Zane via Submission at 0:59 of Round 1

Ten Pow vs. Mora Changed from Confirmed to Cancelled

Whoever manages the Goat Shed is amazing. They fight the same people or records that are like 0-3.

"This is the internet idgaf what anyone thinks of me.." - Me

Wow only 59 seconds to finish Zane LOL. My god he’s a terrible fighter

Hes all action though

True, he is exciting

After giving my opinion on the decline of Titan FC in the last year, it makes sense for me to comment on tonight's card:
The first fight (which was not listed prior to the event in Tapology) was a can-crushing fight and it ended as expected, as long as a promoter does not do this excisively it is normal, even in Bellator we see can-crushing fights in the opponents or early fights.
After there was a quick victory for Somchay, I am genuinely interested that if Somchay continues to face fighters with a negative record or debutants he can manage to reverse his 0-7 to 7-7, he has 2 wins in a row since his return in 2022 and the truth maybe still It's not too late for Somchay to at least reach the Bellator undercards hahaha
Good victory for Mayol against Morrison in a rematch after having met in the amateur, Morrison had 2 wins against good rivals in the amateur, but this time Mayol managed to finish the fight.
Good victory for Lewis and even better that he now trains at Sanford MMA where they can get the most out of him.
Then Hamed finished Diaz Zuleta with leg kicks, a miss match, but he wouldn't consider it can-crushing as such (both had positive records).
Finally Peña submitted Zach Zane in less than a minute, because of his fighting style I think Zach Zane could do well in BKFC, he lost his debut in BKFC but he always exchanges punches and not worrying about grappling suits him. Peña at Titan FC could very well fight experienced fighters who are not under contract with any promotion (like Siler or Andre Harrison).
The event was acceptable, not so many fight drops, not so much can-crushing and a couple of prospects like Mayol, Lewis and Hamed fought

Alright whos in charge of results?

Show your self and fix yourself

"Ronda, make me a sandwich."

"Ronda, make me a sandwich."