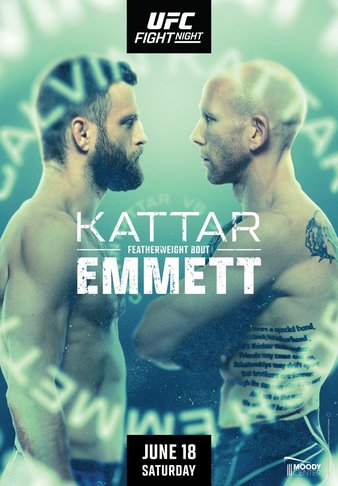 And if my imagination is in the correct way...
The podcasts is only for UFC presentations... !?

Hey bro were you asking about those podcasts I posted? Yeah they are UFC prediction breakdowns. And very good ones. Suggest you check them out.

Kattar vs. Emmett
Calvin Kattar, DEC
Kattar proved me right against Giga, Max sharpened him also I don’t see Emmett getting this

Cerrone vs. Lauzon
Donald Cerrone, TKO, R1
The chances of the both of them just making it to the octagon

Means vs. Holland
Kevin Holland, DEC
Holland’s style will give Means trouble and likely frustrate him

Stamann vs. Wineland
Cody Stamann, TKO, R1
Wineland is tissue paper at this point in his career, enjoyed watching him in his prime but this is the end of the road

I think I'm with you on all your picks this week bro. I like that Ramos sub and I also think Stamann gets a finish (also might be a sub).

I'm leaning Marquez but that one's really close. Only one I out right disagree with you on is Wells/McGee. I think McGee gets finished.

Great break downs though and thanks for sharing as usual.

Who do you guys watch for prediction vids? I like MMA Guru for entertainment, Fight Night Picks because those guys are legit sports nerds, & Dan Hardys Outlaw Pick Podcasts. I want to start a UFC prediction youtube page but I want a %65 or over prediction rate before i start one.

Means vs. Holland
Kevin Holland, TKO, R1
Weird that a guy making the drop from MW to WW doesn't have a bigger size advantage on the guy who used to fight at LW.

I think u missed reply my post with someone else fam

Win or lose. Right or wrong. I always have respect for u. Ur breakdowns fits even on bad days. Well this is mma and theres no way perfection exist.

check out DFS By The Numbers

I'm in the same boat except for Jasmine vs Silva

Cerrone vs. Lauzon
Donald Cerrone, TKO, R2
Who the hell knows at this point. I’ll take Joe not showing up at the ceremonial as a bad sign. Cerrone survives the early storm and takes over as Joe gasses. Or cowboy sleeps in the first 30 seconds. Who the hell knows???

Buckley vs. Duraev
Joaquin Buckley, TKO, R2
Stabbing at the dog here. If Duracell gets it to the ground it will go badly quickly for Buckley. But I

"You’ve been hit…. and its up to you whether you want to get up."

I listen to him sometimes but not weekly. Also I always end up looking at your profile gif for like a solid minute whenever I see it 🤣

Kattar vs. Emmett
Calvin Kattar, DEC
Just think Calvin is a bit better everywhere. I think both guys will look to strike, and I think Calvin will be the one pressing forward for most of the fight. Emmett has been known to start slow, and you can't do that against Kattar as it's really hard to make up ground on him. Calvin might drop a round in the latter half of the fight, but that's all I think he's gonna give Emmett.


Cerrone vs. Lauzon
Joe Lauzon, TKO, R1
Not any appeal in picking Cerrone here in my opinion. He hasn't shown anything that makes me think he's ever gonna win another fight. If Lauzon comes out fast he'll get the finish just like every other opponent of Cowboy's has in the recent past.


Holland vs. Means
Kevin Holland, DEC
Means is a really tough test for Holland at WW. I don't think Means will be able to do a whole lot that will surprise Kevin, but I also don't think Holland is finishing him. Means is super durable and never goes away, but he's got nothing for Kev's striking. Holland 30-27


Buckley vs. Duraev
Joaquin Buckley, KO, R2
Normally I side with the grappler in these types of stylistic differences, but the line is way to inflated. Duraev is good, but severely underperformed in his debut. His cardio abandoned him and he didn't take shots well. Buckley hits a lot harder then Kopylov, and Duraev has has a chin issue in his career with all three of his losses by KO/TKO. If Duraev's gameplan is to strike with Buckley (which is what he said), then I see him going out and Buckley having another highlight on the reel. Duraev should want to wrestle, which I believe is his only chance at winning.


Ismagulov vs. Kutateladze
Damir Ismagulov, DEC
My most anticipated matchup on the card. Ultimately siding with Damir because of his activity and his wrestling. Guram was taken down a lot by Gamrot, and I think Damir will be able to do the same thing if he chooses to wrestle. Damir has had a very strong strength of schedule in his UFC tenure and has yet to drop a fight. He didn't look great against Alves, but his wins over Moises and Alvarez have aged quite well. I think Damir is gonna wrestle and stay on top for a lot of the fight, and he'll edge a 29-28 UD.


Marquez vs. Rodrigues
Julian Marquez, KO, R2
Julian is a force at 185. You can never count the guy out. He also likes to brawl and hits like a truck. I don't think this is a good combo for Robocop. I see Rodrigues winning the fight until he's not. I have a feeling he'll get the first round, and then Marquez will stop caring and push forward and back Rodrigues against the cage and put him out with a hook.


Yanez vs. Kelley
Adrian Yanez, DEC
This is gonna be a very close fight. Kelley is a live dog for sure. He has a great all around game and isn't afraid to brawl. But I think Yanez has the much crisper striking. I think he'll be able to push forward and outpoint Kelley to a 29-28 UD.

Jasudavicius vs. Silva
Jasmine Jasudavicius, DEC
I think Jasmine is gonna be around for a while. Her all around game is very clean, and honestly, Silva is a can crusher. I don't see her doing anything to Jasmine that she can't handle. 30-27 UD


Chavez vs. Ramos
Ricardo Ramos, DEC
Super underrated fight. Both of these guys can strike well and I reckon grappling will be scarce in this one. Ramos is younger and has more UFC experience, and I think he's the cleaner striker of the two. Chavez is a tough dude, which is why I think it's going the distance, but Ramos can finish fights, so it's never off the table. But I got Ramos 29-28.


de Paula vs. Oliveira
Gloria de Paula, DEC
I think I rate GDP a bit higher than the average joe, but I think she's better everywhere here. Oliveira is young and raw, and I picked her to beat Ricci in her debut, but she just showed an unwillingness to get up when taken down. I think GDP will look to grapple and just maintain the position once she gets there. The submission threat is possible, but I don't see it happening. GDP 30-27


Stamann vs. Wineland
Cody Stamann, TKO, R2
Cody needs a finish in this fight, and frankly there is no excuse. Wineland is old and doesn't take shots very well anymore. He'll have no stop for Stamann's wrestling, and I see Stamann trying to make a statement with a G n' P TKO in the second.


Hawes vs. Winn
Phil Hawes, KO, R2
I would be very surprised if Phil doesn't win this fight, but then again, it's Phil Hawes. Winn is a wrestler, and that's it, so if Phil can stop that then I see him blitzing Winn in the second and putting him out.


Dolidze vs. Daukaus
Kyle Daukaus, DEC
I think this fight will be a lot closer than people think, but I'm still siding with Kyle here. Dolidze is a low volume fighter, and that won't work in this fight, and his cardio is a but suspect at times. I don't rate Daukaus as highly as some, but I think he can squeak out a decision here with his volume clinch control. I'll even predict a split decision win for Kyle.

Ismagulov vs. Kutateladze
Damir Ismagulov, DEC
Lotta hype on the dog here but I’m going with the chalk.

Marquez vs. Rodrigues
Gregory Rodrigues, DEC
One of the closest fights. CBC throws bombs and is durable. But I like Robocop’s activity level and skill set especially if he grapples.

Yanez vs. Kelley
Adrian Yanez, TKO, R2
Fun fight but yanez catches him and makes him pay for missing weight and slandering Brazilians.

Wells vs. McGee
Court McGee, DEC
The old man grids another one out.

Hawes vs. Winn
Phil Hawes, TKO, R2
Hawes stays off the ground and keeps his chin intact to starch Winn

Daukaus vs. Dolidze
Kyle Daukaus, DEC
Close fight and Roman is really good but Kyle out points him and threatens more.

"You’ve been hit…. and its up to you whether you want to get up."


I think this is gonna be mad good three round war!

"“I don't care if people boo me or talk trash to me. I can't understand what they're saying anyways.” - Jose Aldo"