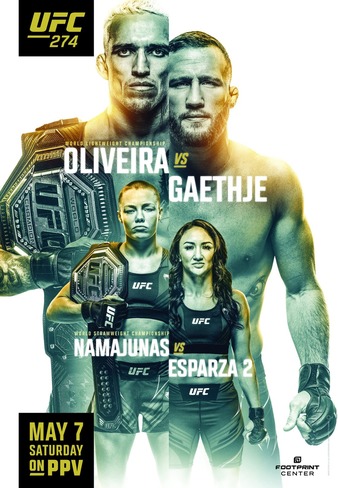 Gaethje might be a good wrestler, but his bjj is really bad. Before khabib fight Gaethje said "if I'will get taken down it's over". In these words, you can see his confidence level as a grappler. I bet Conor has better defensive bjj than Gathje.

Y'all talking about how Gaethje lost agains't Khabib so his ground maybe isn't that bad, did you saw the fight with ur ass or with your two eyes for god sake ?

He ran away the whole fight like Khabib was lava and gassed himself out without getting hurt by Khabib whatsoever since Khabib striking is way worst than Oliveira.
When Khabib finally shot for a simple double leg, he did whatever he wanted in the ground Gaethje showed us absolutely ZERO defense. Even Conor showed WAY more skills on the ground than Gaethje did.
Saved by the bell, then second round he got ****d.
Talked load of ****s before the fight saying he won't go out like a *****, won't tap and what he did ? Tapped and go out sleeping.
This guy is all talk. Same thing with Chandler, saying he won't backup and what he did ? Back up right away while he was talking mad **** at Chandler saying he was gonna shoot like a ***** and won't strike with him.

I'm not even picking Oliveira because he can ragdoll the **** out of this ******** in the ground, no.
I'm picking Do Bronx because I believe he has way more tools in the FEETS too.

I'm predicting the first round will be a straight war on the feets, Charles won't even shoot, watch.
He'll go and bang with this fool for the whole first round, putting high pressure right away with his front kicks, knees, elbows, keep small distance.
He'll get rocked too but will get right back up and keep the pressure and you'll see Gaethje give away his best heavy shots untill he gasses himself up like always.

Then I'm predicting Charles will choose to either knock him out on the feets to make a statement or sub him in the 2nd round.

Y'all sleeping on the kickboxing game of Oliveira way too much, don't forget what he did agains't elite boxers like Dustin and Chandler who has really fast hands and even more power than Gaethje in the first round.

PS : Also Oliveira is well aware of his mistakes don't think he's dumb and not working on correcting his defense.
He talks about his mistakes here. That shows how smart him and his team are heading to this fight. He's always improving. If Dustin couldn't put the nail in the coffin, Gaethje has a very low chance of being the one.

72% of Tapology has Oliveira winning, and 82% of those think it will be a submission finish. I wish I knew who the **** you were talking to in your posts. Dude wrote a book crying about something no one is even arguing.

"LOOK MOM, I GOT MY BLACK BELT IN MMA"

You missed the whole point you brain dead dummy. Learn how to read.

I'm responding to those who thinks that Oliveira only weapon is his ground and sub game, here i'm telling y'all that he can also knock him out because y'all sleeping so much on his striking but forgot he outbox Dustin and Chandler.
The only memory that you had is him getting caught but didn't see anything else deeper because you just like all the other sheeps who can't break down a fight and gets influence by the commentary.

You're here since 2019, living in the forum 24/7 like the dork geek you are and manage to get a 50% success prediction, you don't even have the right to argue with me you fool.

I'm actually teaching you some lessons kid so your ratio can go up and you can have a nice black belt like the other dorks here.

While i'm giving new angles of analysis unlike everyone who come here telling us the basic stuff that everyone knows : Gaethje is a heavy puncher and Oliveira can take his back and sub him.
I'm giving you new angles, it's free enjoy dummy. Make some money.

Every dorks like you are living here 24/7 giving casual analysis just to make 0$.
I bet your maximum bets are 500-1000$ because you're **** at analysing fights, your 50% prediction shows us how much you suck ass. You probably broke too.

You still mad I humiliated your buddy little d*ck sucker ? AHAHAH bunch of dorks s*cking each others balls while jacking off your virtual black belts.

Stick to downgrading my posts, it's all you can do, dork.

Duong. the hero we need but don't deserved

No one is going to read all that you idiot

"LOOK MOM, I GOT MY BLACK BELT IN MMA"

I won't go as far to say Charles is a better kickboxer then Justin, But I do think it be competitive on the feet, I don't like Charles Boxing Defence because taking hard counters by Gaeche is not good, But he's knees to the body are brutal, Also Justin will be terrified of getting taken down,

On the ground, Justin has great wrestling, But bad jiu-jitsu,  If Oliveria can take him down, I think he submets him as Khabib made Justin look bad in Jiu-Jitsu, And I think just the jiu-jitsu stuff, Oliveria is better then Khabib in that type of grappiling, But Khabib will have better takedown so Justin could stuff Oliveria takedown

I think its the best fight the UFC has at the moment, I'm so exited for it, I don't even care if the undercard of the PPV reeks of Bellator style booking

Johnson’s returning. Brown vs. Khaos banger. Royval/Schnell….enough said. Loopy vs. Carnelosi is a fight between intriguing up and coming fighters. Loopy is one of my favorites and Carnelosi has shown she is more than game for the UFC. And that’s all before mentioning Chandler/Ferguson which is a dream match up.

THUG ROSE with a chance to redeem a previous loss.

And I forgot Lauzon versus Cowboy who is for those fans who could give a **** about records and belts. This is a great card I hope it stays together.

Rose Namajunas vs. Carla Esparza
Namajunas, TKO, R1
Rose has matured beyond Carla by leaps and bounds.  She's at almost even money right now.  I'm going to bank on her to win, by any means.  I've been riding with her since before she TKO'd Jędrzejczyk.  Thug Rose:  "I am the champion."

Rose is going to lose her second rematch in a row.

"There's 3 things in life that excite me. A woman, of course. Dinosaurs, and the violence of the Octagon" - GSP

Randy brown is getting knocked out

well thats khaos only way to win this fight, and if he dosent get that it will be a long night for him

This has to be the the highest age average per fighter on a UFC PPV card.

I can’t believe Khaos Williams vs Randy Brown is that low on the card. That fight should at least be headlining the Prelims.

"I CANT LET YOU GET CLOSE!"

Don't think that's the final bout order. At least for the prelims anyway. The main card is set however. Williams vs Brown is going to be a good one for sure!

If i wanted to see two washed up legends with nothing left fight i'd usually watch Bellator. Luckily i can see 4 icons, one of which is one of my favourite fighters of all time, coming of knockout losses and prolonged losing spells be told to beat the **** out of each other. Just let Shogun and every other fighter retire. Lauzon is the only guy coming off a win and it's been 3 years. Seriously just ******* force these guys to retire, give them a ******* pension or something because noone wants to see some of there all time favourite fighters withered with dementia and brain trauma be put back in to a fist fight.