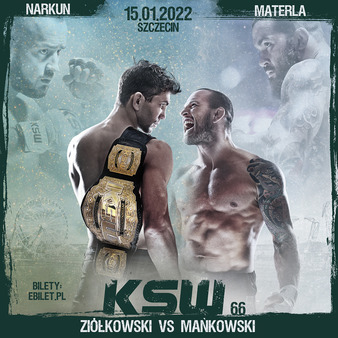 @JohnVolcan do you think he can win?

Janusz vs. Dzwoniarek Changed from Confirmed to Cancelled

Romanowski vs. Kaszubowski Changed from Confirmed to Cancelled

Kaszubowski vs. Maciejowski
Robert Maciejowski, TKO, R1
I'm gonna go with the upset on this one, dude has a 5" reach advantage and he's coming off a first round KO against a 6-0 fighter.

Ziółkowski vs. Mańkowski
I am sticking with Marian Ziółkowski at -200. He has a xenotropic double knife hand block. Ziółkowski won't implement the rival. Believe it!

Kaszubowski vs. Maciejowski
I lean towards Krystian Kaszubowski at -500. He has a genuine double knife hand block. Kaszubowski could maintain the cutman. Truth!

Janusz vs. Skarżyński
I go with Wojciech Janusz at -800. He has a tremendous bear hug and a jinxed crucifix. Janusz is about to guess the achievement.

Koziorzębski vs. Szymajda
I lean towards Kacper Koziorzębski at -400. He has a macabre armbar and a resilient finger lock. Koziorzębski won't limit the senses. So say we all!

Materla vs. Radcliffe
I am enamored with Michał Materla at -143. He has an exhaustive gogoplata and a meritorious stutter step. Materla is gonna usurp the cage.

Surdyn vs. Martinik
I appoint Patryk Surdyn at -200. He has a twisted five point palm exploding heart technique and a underrated hiza guruma. Surdyn will damage the masterpiece. Mark my words!

Rajewski vs. Bäckström
I go with Sebastian Rajewski at -250. He has an exhaustive elevator hook sweep. Rajewski isn't about to immobilize the masterpiece. Вот, где собака зарыта!

Narkun vs. Chuzhigaev
I fancy Tomasz Narkun at -275. He has a digital double wrist lock and an integral clavicle crusher. Narkun ought to blend the chosen one.

Rajewski vs. Desmae
I am enamored with Łukasz Rajewski at -200. He has a ultrasonic full nelson and a yucky bear hug. Rajewski will likely tweak the victory.

Ziółkowski vs. Mańkowski
Marian Ziółkowski, TKO, R4
You can find my breakdown here on tapology. I think cardio will make a difference. BUT if Borys will be able to take him down easily and EARLY then maybe he will win. Because I think it could be hard for Marian to get up, he's not really good in that aspect. And if so, it will be hard for him to set the pace and make Borys work. Ziółkowski will win tho

Narkun vs. Chuzhigaev
Tomasz Narkun, SUB, R2
Chuzigaev can only win via first round knockout. Can he do it? Absolutely, even tho Narkun's distance control is getting better, he's still slow, hittable, still throwing naked kicks. But he's really tough and I don't think Ibragim will be able to keep up with his pace. Tomasz is a lot stronger, he will probably take this one to the ground sooner or later, even tho his wrestling isn't special. And on the ground he's a nightmare.

Rajewski vs. Desmae
Donovan Desmae, DEC
Extremely close fight, Łukasz, just like his brother, really good kickboxer, but Desmae is good enough defensively to make it close on the feet. His counters are beautiful, he will have an adventage in the closer range, legkicks can also be a good weapon for him for sure. But I feel like he will be able to take this fight to the ground and it could make a difference.

Rajewski vs. Bäckström
Sebastian Rajewski, TKO, R1
Niklas's striking defense is **** and Rajewski is a really good kickboxer. He doesn't want to go to the ground tho because Backstrom is dangerous there. But still I don't think that Niklas's wrestling is enough to take this fight to the ground and on the feet, I think we will see some highlight reel headkick KO.

Materla vs. Radcliffe
Jason Radcliffe, TKO, R1
Like I said, easy fight for Jason. Materla can only win if Radcliffe loses his balance and fight goes to the floor or something like that. Because I doubt that he will take him down. And in the striking match? Man, murder incoming!

Janusz vs. Skarżyński
Wojciech Janusz, SUB, R1
Kulkinio is better everywhere but he will probably play it safe and take the fight to the ground.

Kaszubowski vs. Maciejowski
Krystian Kaszubowski, TKO, R1
Robert has a puncher's chance and nothing more. Krystian can beat him everywhere, definitely easy fight on the ground.

Surdyn vs. Martinik
Patryk Surdyn, DEC
If Surdyn isn't stupid enough, he will probably win but I feel like he will make it closer than it should be.

Even though I was fovouring Ziółkowski at first, I was still saying fight's pretty damn close. Main reasons I've decided to pick Borys over Marian:
- The fact, that in last 18 months Red Dragon fighters have fought Marian twice, they have not only camera footage but also over 30 minutes of experience against Marian inside the cage. They are well aware of Marian's solid controll of distance and his outstanding footwork. Roman Szymański had troubles with shortening the distance, did not adjust during the fight and that caused him losing.
- Borys' cardio has improved, he have been using mutlitple breathing methods, excercises, he actually put some work in it.  In his first Parke fight he got outpaced, then you can see how big of an improvement he's made when you look at 15-minute round in boxing with mma gloves against Parke. Pace there was pretty high,
- Due to a knee injury, Borys had to box only for some period of time. He believe he's met the best coach out of every coach he had opportunity to train with. (ATT, Thailand, multiple Polish clubs). Yet, he says polish boxing coach was the best he had. He says he improved his boxing on multiple levels.


I see Borys controlling centre of the cage, avoiding jabs and checking calf kicks, at some point he will likely shorten the distance, put Marian against the cage and start to work here. Marian's takedown defence is quite impressive, but I do believe they had enough time to figure out how they can trick him into a ground game. Probably while he overcomits with a kick or something, but it will require perfect timing, because Marian throws feints from time to time, to have better distance controll.

Ibragim should probably compete in middleweight here, if he stays in KSW, I see him as middleweight champion somewhere in the future.

Donovan Desmae defeats Łukasz Rajewski via Submission at 4:07 of Round 2

Wojciech Janusz defeats Damian Skarżyński via Submission at 2:04 of Round 1

Lol Niklas what a fight iq

My goodness. What a finish!

Michał Materla defeats Jason Radcliffe via KO/TKO at 4:07 of Round 1