Covington is NOT a good **** talker. He comes across as an insecure white trash Scrote. I enjoy **** talk, but you at least need to be somewhat intelligent and witty. Plus, he hasn't backed any of that **** up. Trying to deny he didn't get his jaw broken. So he's a lying, skill lacking, cry baby. 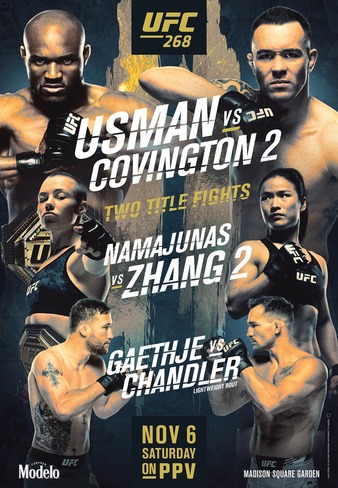 His only loss is Usman so i'd say he's backed most of it up. Plus no idea how you can call him skill lacking.

He started all of this fake tough guy **** right before he fought Usman. It's a fairly new thing so he proceeded to get his jaw broken and ass kicked. So I'm talking about that. He's lacking skills in my eyes because of that. In their first fight, you hear him clearly say "I think my jaw is broken" now he denies it. He ran out of the Octagon like the school bully would after getting destroyed. His racist ass sucks!!

"Undefeated and undisputed in the pick game"

Usman's loss wasn't in the UFC, Covington's was.

So, how is the warley alves loss relevant at all and surely losing to Caseres is a lot worse.

Anyone that needs to pretend to be a badass. Is brain dead. 😏 😂

If the loss doesn't happen in the UFC, no one in the mainstream cares.

"If it smells of dog then do it doggy"

People aren't objective, Covinton is great, Just because he lose to Usman doesn't mean he bad. It just Usman is the best guy in the world at fighting. It ******** to think he's bad and you don't know what you are watching, Half the people here should stop talking about MMA if you think Covinton is bad. People are dumb I guess. Going 2-2 in 2 fight going into  the fifth  and people argunung you could won  agaist the pound for pound make you a bum. Also how did Hadrian got 4 dislike. He's and feeding a bus a carret are the only none ****** on this thread

Also, Who give a **** he lost to Warley Alves like 12 fight ago, He clealry got better, Holy **** this thread is full of people who too dumb for a short bus. With the  logic of most people in this thread, GSP a bum, He lost to Matt Serra, Isreal Adesanya lost to Jan Blahovic 2 fight ago, He should just retire , Demetrius Johnson lost to Brad Picket, Proving all midgets can't fight And don't get me started on Anderson Silva, He lost 11 times, How is he a goat??  The point im trying to make is, Unless you Khabib, You don't exit this game unscath, And everyone loss, And most fighter have bad loss on they record, Can't hate covinton too much for losing to Warley, When people who the mass majority of people think are goats all have bad losses on they record, You don't watch MMA if you think bad of Covington for that loss,or just braindead

I personally think people just hate him because he play a character, And need to be more objective. But good for him because he make more money for him. I don't get how so many people fall for the stick, But I respect it. Behide all that smock and mirror he a good bloke who want to feed his family. He not a real life **** like Conor, TJ or Jones.  all would be a massive **** for extra money and thing, Don't hate the player, Hate the game. Blame the fan who belive the **** talk is real, Not the fighter who fill the market, It business 101

Thank you Damien, just because you dislike a fighter doesn't mean they're terrible

@Mercedes 'Fake tough guy'? He's an MMA fighter. In UFC. There aren't any of those in UFC. He came back to put on a competitive fight after pretty much getting KO'ed in the second round vs the best WW of all time. He's easily the second best WW in the world, and on a good night he could probably beat Usman. It's very likely the case that he would beat the **** out of anyone you have ever known.

You're pretty pozzed TBH. You're basically the fat neckbeard on the couch who says he wouldn't have tapped.