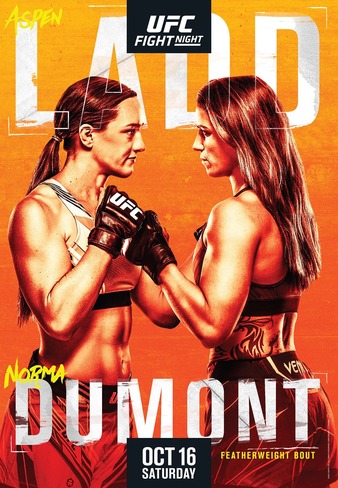 Fiorot vs. Bueno Silva
Mayra Bueno Silva, SUB, R2
This is an intriguing women's striker VS grappler fight and could prove to be a very entertaining fight. There's no denying Manon Fiorot's power but Mayra Bueno Silva's submission game is seriously underrated so I'll take a chance on her as an underdog.

Fiorot vs. Bueno Silva
Manon Fiorot, TKO, R2
Really both are prospects in their vein and makes a fun chess match, should be much closer 60/40 by my maths.

Manon Fiorot is this Stephen Thompson of woman stylistically speaking, she is stronger then Mayra Bueno in terms of strength
As far as I`ve seen Mayra Bueno bjj is good from guard
If Fiorot plays smart she could take a unanimous decision or perhaps a ko
Advice for Fiorot, don`t ******* wrestle neither ground and pound :)) just hit and run

Ladd could get herself the title shot she will never had at 135 with only one fight at 145. If Nunes fight again one day...

Something I think I only notice as a Autisic person,  but the last 3 card, It has been mostly favourites winning

Fishrat saids the favorites should win approximately  68% of the time, So the favourtes have been winning more then they should have. Fight are indenpent outcome so don't take to much from the stats. But the last time I notice 3 card in a row with mostly favorites, The next card Dillashaw vs Sandhagen had an underdog centric card. I wouldn't be surprise if the universe balance out the win percentage and this card be underdog centric also, Betting every underdog might be profitable, But a take of favoutes winning most fight so follow the trend to the end is also not stupid

Edit: also I think the favorites winning  68% of the time might be generous as I think people would have better pick percantage, The highes pick percentages is usually around 60%. I would of guess favourtes winning about 60% of the time just by those figures

Thats deep and im drunk apreciate your analysis.
Pretty sure fishbat was doing math on his toes.

"What doesn't kill you makes you incredibly weak"

Just amazing to me that both Arlovski and Miller are still around.  Arlovski has been fighting in the UFC since 2000 and Miller since 2008!

In fact, Arlovski's debut at UFC 28 was the last US event previous owners SEG held before Dana and the Fertittas took over.  So Arlovski has been part of the UFC longer than Dana himself!

I hope he wins on Saturday!  May he fight forever.

i'll take ladd by ko/tko for these reasons, way more experience, shes 16-2 if you count her amature record. shes fought way better competition and has been fighting in the wrong weight class imo. i think featherweight is the best division for her.

This card has really nice dogs, only hard part is which dogs are going to win cause a lot seem viable.

Davis vs. Batgerel
Danaa Batgerel, TKO, R1
Danaa has some very nice counters and I feel like he can land these in the pocket when exchanging with Davis, he can definitely land a counter of a Davis kick too. Not very confident but I'm not cautious either, I do feel that Danaa should definitely win this fight

Aspena Ladd is a dumb bum who cries that her tampon stopped hey from making the weight. I hope Norma Dumont wins and there is no robbery. Aspen Ladd needs to leave the promotion

Johnny Santa Maria is 37 today! Send him a Tweet.