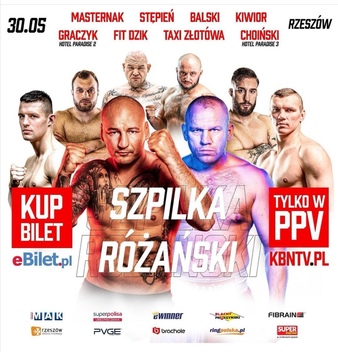 Balski vs. Masternak
Mateusz Masternak, TKO, R9
Wow this is great match making, if you're confident in a pick on this one I'd love to know why

"Check out my pound-for-pound greatest list, AKA "Fisty's Rusty Can Pile" for a laugh at the worst fighters to ever step in a cage! 420+ and counting!"

Berezewski vs. Moravek Changed from Confirmed to Cancelled

Balski vs. Masternak
I have a crush on Mateusz Masternak at -550. He has an oppulent elevator hook sweep. Masternak can maintain the cutman.

Szpilka vs. Rozanski
I am obsessed with Lukasz Rozanski at -300. He has a natural jab and a creative ground and pound. Rozanski isn't about to feign the canvas.

The Polish Promoter's Chief Matchmaker at Knockout Promotions must have rubbed his hands together when the Colombian, Denneb Diaz signed to fight Pawel Stepien, because when you look closely at the Pro and Amateur Boxing Records of both combatants who are currently 14 - 0 in Pro Boxing, their is a remarkable difference in the quality and type of experience of fighter they have both faced... Diaz has stopped 11 out of 14 previous opponents, but he has never been past 4 Rounds in 14 previous bouts, which sounds great until you give his previous opponent's records a quick glance... Their records show that they aren't even half decent Pro Boxer's... Basically, the Colombian is a Can Crusher at best... If he beats Stepien over in Poland today, in my opinion, it will be a remarkable achievement, but in looking at the fight on paper, after careful analysis, I expect Stepien to Stop Diaz inside 6 Rounds... With ease I might add... 💯🤔🧐🤑👊🥊👍

Adam Balski stepping up a level to test his skills on a short notice opportunity, admirable... Mateusz Masternak has been one of Europe's and the World's best Cruiserweight Boxer's over the last 5 Years, since he fought Tony Bellew for the European Title in December 2015 and lost a via a very close Points decision... I expect Masternak to be ultimately too good, but a great fight, which I also expect to be competitive whilst it lasts... Masternak has the experience, the knowhow, and he carries decent power... Balski has an Unbeaten Record, with plenty of Stoppage victories and youth on his side... Intriguing match up, but I am leaning towards a Masternak victory 💯🤔🧐🤑👊🥊👍

Unfortunately for Artur Szpilka, he has never been the same since Deontay Wilder nearly took his head clean off with that hook he didn't see in the 9th Round, back on 16th January 2016 in New York, USA, whilst fighting for the WBC Heavyweight Title, is one and only World Title Shot... (in the aftermath of the fight we saw The Gypsy King, Tyson Fury have a 1 to 1 in the centre of the Ring with Deontay Wilder, whilst Wilder was conducting his Post Fight speech... The footage always make me laugh 😂💯👏🥊👊👍)... Upto the point of being Knocked unconscious, Szpilka, an awkward technically gifted Southpaw, had made the contest with Wilder quite competitive... On returning to the Ring, Szpilka has had mixed fortunes, his Wins haven't been overly impressive and his losses have been heavy and Stoppage Defeats, losing to Adam Kownacki in 4 Rounds in July 2017 and then a rejuvenated Derek Chisora in 2 Rounds in July 2019, which was a bad, bad KO... The problem this evening for Szpilka is the fact that he may have more fights and more experience than his opponent Lukasz Rozanski, but Rozanski appears very fresh, has 12 KO's from 13 Professional Fights, hits seriously hard for a small Heavyweight, who weighs approximately 16 Stone, hence the reason why they have made it a Bridgerweight Matchup and doesn't like fights to go past 4 Rounds... Not a good sign for Szpilka, who in his last Pro Contest last year, struggled to beat a Ukrainian Cruiserweight in the form of Serhiy Radchenko, who he sc****d past via a 10 Round MD Points Decision last year in March 2020...All this doesn't bode well for Szpilka, especially when I think his Chin has gone... Expecting Rozanski to demolish Szpilka between Round 3 - Round 6, or as soon as he lands flush on Szpilka's chin to be honest with you... Let's hope that Szpilka has his Trainer's on and has been practicing how to be evasive like Floyd May weather, because a trade of punches will see Szpilka laying on the canvas worse for wear... Guaranteed!! 💯🤑🤔🧐🥊👊👍

Lukasz Rozanski defeats Artur Szpilka via KO/TKO at 2:25 of Round 1

Pawel Stepien defeats Denneb Diaz via KO/TKO at 3:00 of Round 5

It only lasted 1 round but a LOT happened!!!

Szpilka dropped Rozanski with the 1st punch!!!!!  Unfortunatelyfor hi mthat made Rozanski mad and he beat his ass!!!!Dropping him 3x!!!

Aleksander Berezewski defeats Bronislav Kubin via KO/TKO at 2:59 of Round 1

Pablo Mendoza defeats Damian Kiwior via KO/TKO at 2:59 of Round 2