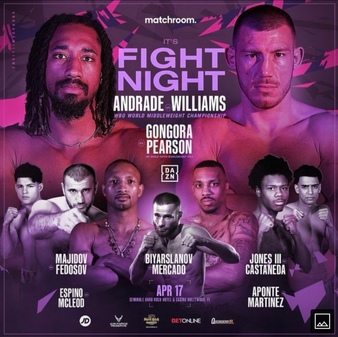 Andrade vs. Williams
Demetrius Andrade, DEC
Watching this instead of that fiasco ****show askren vs paul.

"Body slam by the tankster "

Andrade vs. Williams
Liam Williams, TKO, R7
It's kinda funny that Andrade doesn't realise he's about to go in with an animal!!!! The most padded, over rated World Champion reign is coming to an end!

Andrade vs. Williams
Demetrius Andrade, DEC
I see Andrade SLIGHTY edging it out against Liam Williams. He is gonna be way less patient but Liam Williams being patient could be a key to victory,

Biyarslanov vs. Mercado
Arthur Biyarslanov, DEC
REALLY close one but Biyarslanov should edge it with the slightly better punches.

Jones III vs. Castaneda
Jorge David Castaneda, DEC
It’ll be a tough fight for Castaneda but if he is a good enough combination of patient and unconventional he should win.

Gongora vs. Pearson
Carlos Gongora, TKO, R6
Pearson, while being a rock solid amateur and coming off his best win, has never fought above middleweight. Gongora also isn't a natural super middleweight (still ranked by one org at MW lol) but he just took out a guy who looked like a LHW so I expect him to make easy work of Pearson.

Andrade vs. Williams
Demetrius Andrade, DEC
I'd like to see Liam Williams pull it off but I'm not confident about his chances. I think he'd need to find a knockout punch early if he is gonna win this and I don't know if he'll find it. Fingers crossed anyway!

Biyarslanov vs. Mercado
Arthur Biyarslanov, DEC
Awesome fight! Two undefeated prospects in a fairly even fight early in their careers! Boxing would benefit massively from more fights like this!

Gongora vs. Pearson
Christopher Pearson, DEC
This is another close fight. Gongora was meant to lose his last fight, think he was a +1000 underdog. He was losing too, until his opponent gassed and, to his credit Gongora didn't and had the ability to finish with a terrific uppercut. Pearson was a bit of a busted prospect but he also pulled out an upset and his biggest win in his last fight. I think Pearson is the better boxer but Gongora the bigger puncher. Pearson could win most of this fight only to get caught and finished late. I think I'm going to put faith in the better boxer

Biyarslanov vs. Mercado
Israel Mercado, TKO, R7
This could turn out to be a really good scrap. Both young, undefeated. Biyarslanov has the better amateur pedigree Mercado has, IMO, the better wins as a pro,beating 2 undefeated guys in his last 2. I think Biyarslanov aggressive style may be his undoing, he gets hit a lot, Mercado impressed me a few months back on ESPN. He's going to have to win big because he's the away fighter, but I think he can do it. Maybe even by stoppage, like I said Arthur is there to be hit.

Williams for the late stoppage upset in round 9


@mtcoat
>Pearson, while being a rock solid amateur and coming off his best win, has never fought above middleweight.

This is really an awesome matchroom card with plenty of open fights.

Biyarslanov vs. Mercado
I feel disposed to Arthur Biyarslanov at -250. He has a twisted clawhold and a zippy attitude. Biyarslanov ought to fight the cycle.

Gongora vs. Pearson
I finger Carlos Gongora at -700. He has a genuine elevator hook sweep. Gongora will sabotage the previous pitfalls. No doubt!

Andrade vs. Williams
I love Demetrius Andrade at -280. He has a delicious kimura. Andrade might ignite the production.

Great looking card, should be entertaining! glad there is some high level boxing today between this card and MTK as opposed to having just a YouTube vlogger to watch. Happy Fight Day!!!

I am tipping Liam Williams to put a calculated, but pressure induced beating on Demetrius Andrade this evening. I have a lot of respect for Demetrius Andrade's overall World level Boxing ability, Unbeaten Professional Boxing record, stellar amateur boxing career, 3x 2 Division World Title Holder at Light Middleweight and Middleweight, recent performances since being signed up by Matchroom Sports USA and beating largely unknown African, Walter Kautondokwa for the WBO Middleweight Title in October 2018, that he proudly carries, even though I wish he had fought BJS for the Title instead... However, I say all the above and I still think that Demetrius hasn't been chin checked properly, but when Artur Akavov caught him flush with a shot late in their one sided bout in January 2019, Andrade's legs went to jelly until he got out of the Round... He also went to a decision against Alantez Fox, when Liam Williams in December 2019 stopped Fox, a 6ft 4 durable, tough guy, comprehensively in 5 Rounds, whilst dropping Fox with a power shot in the 4th...As the fight has got closer this past week, watching Andrade's reactions to things, watching closely Andrade's media work, he just looks nervous... I think them nerves are down to two things, overlooking Liam Williams until the last minute, 4-5 weeks out from the fight, instead of the customary 8-10 weeks in camp, due to the fact that Demetrius was chasing a much bigger fight, against an older, slower guy and b) he can see that a loss this evening will mean that 12 Years of hard, solid work could just go up in smoke... Liam Williams for the Stoppage between Rounds 8 - 11...I don't think that Demetrius Andrade is truly ready for WAR, but if he outboxes or even Stops Liam Williams in their fight, I am awarding Demetrius personally with a position in the Top P4P 12 in the World... And I will also eat both my prediction and my betting slip... 🤔🤑🧐🇬🇧🏴💯💪👊🥊👍

Always nice to read your comments full of profound knowledge. 👍


With fair judges I would favor Williams quite strongly, but as Warren boxer on a Matchroom card..... I am not so sure anymore.

"He who hesitates, meditates in a horizontal position"