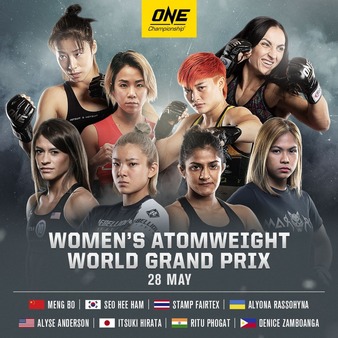 Rassohyna vs. Fairtex
Alyona Rassohyna, DEC
Running it back, eh? We'll see how that works out.

If I had to guess this will not be the full card.
I expect at least a striking only match.
Maybe Anissa Meksen debut?

If Angela could submit Xiong, Nicolini can submit Xiong even faster. In the match against Tiffany Teo, Nicolini while attempting to bring Tiffany down, did not pay attention to points scored by Tiffany with punches and kicks. If the same happens this can be a decision win for Xiong. A KO is unlikely as Xiong will be overly worried of take downs.

Xiong vs. Nicolini
Jingnan Xiong, DEC
If Xiong can keep it standing, she should win a decision.

So its been announced that Ritu Phogat will stay in the tournament, which is an interesting choice as Bi Nguyen "won" against Phogat. As controversial as the decision a win is a win and I think Nguyen should have replaced her in the tourney, but I guess they really wanted Phogat in the tourney.

Correction it seems Nguyen is confirmed not to be in the tourney, but Phogat is also not confirmed to be on the tourney per say. It could be someone different entirely.

Love this card. Better than anything Invicta has put on in the last five years.

Jingnan Xiong might be in trouble with this title defense. If Michelle Nicolini has her cardio in check, I see zero scenario where she doesn't tap Xiong. If Angela Lee could do it, a far superior grappler in Nicolini definitely can.

Anissa Meksen is one of the best in the world at what she does and I'm so stoked ONE finally gave her a fight. She was getting suuuuper vocal on her socials about ONE basically forcing her to sit on the sidelines and not give her a fight, so I'm happy she can finally get in there. She is incredible, honestly. I don't know much about Martine Michieletto other than the fact I saw Denise Kielholtz beat her up once. In fairness, it appears that afterward she beat a girl who I've seen beat Denise Kielholtz, so who knows. Expecting some Meksen violence, though.

Seo Hee Ham is my favorite WMMA fighter of all time and I'm ecstatic to see her in this tournament. I will give ONE credit because this first round match-up for her is not an easy out at all. I fully expect Ham to work her, but Zamboanga is impressive despite the lack of attention. A win over Jihin Radzuan is a legit one, and she worked her ass off for it. But the win over Mei Yamaguchi was her coming out party. That's an elite win for anybody in the division - and one that Ham herself nabbed a decade ago.

Ham's in for a fight in her debut, and I'm pumped.

Alyona/Stamp is a good rematch and another pretty perfect first round match-up to make. Itsuki Hirata is another I love to watch, but her competition has been lacking. Alyse Anderson will probably be her toughest fight to date, but I still think Hirata gets it done. Not to disrespect Anderson, but I kinda wish the American rep in this tourney was Alyssa Garcia. Yeah, she's 5-5, but that woman got exceptionally good at this MMA stuff in her last 3 or so fights. She almost beat Ayaka Hamasaki while 3-4 ffs.

Bo Meng vs. Ritu Phogat is OK, but I feel like Phogat is the most out-of-her-element fighter in this entire thing. There's a lot of decent talent in this thing, hell Ham may be the best fighter in the division regardless of promotion, and I just don't see a world where Phogat can hand with anyone in this tournament. Whether it be Meng Bo, Stamp, Hirata, Zamboanga. I think she decisively loses to all of them. If she makes it out of the first round, I will be absolutely shocked.

Xiong vs. Nicolini Changed from Confirmed to Cancelled

Meng vs. Phogat Changed from Confirmed to Cancelled

Hirata vs. Anderson Changed from Confirmed to Cancelled

Rassohyna vs. Fairtex Changed from Confirmed to Cancelled

Ham vs. Zamboanga Changed from Confirmed to Cancelled

Meksen vs. Michieletto Changed from Confirmed to Cancelled

So it does seem like Julie Mezabarba will be the replacement, but the whole event is postponed!

Why was this card really canceled?

The reason given for the cancellation is the current COVID situation yet there no mention of any of the competitors testing positive and there is a full replacement (all male) card on the same date at the same venue.  I wonder what the real reason was for cancelation.  ONE's "headlined" fighter, Ritu Phogat, lost a figh last week to unheralded Bi Nguyen and is out of the tournament, leaving ONE without their "favorite" to promote.  Hmmm... Coincidence I guess.

I appreciate the conspiracy, but no.

The tournament features Seo Hee Ham a legit division GOAT, Stamp, Hirata, Zamboanga, and Bo Meng. Pretty certain ONE is higher on all of them than they are Ritu Phogat or Bi Nguyen.

Ritu Phogat already got replaced by someone else in the tournament. Julie Mezabarba

@buteo49 The new card is pretaped