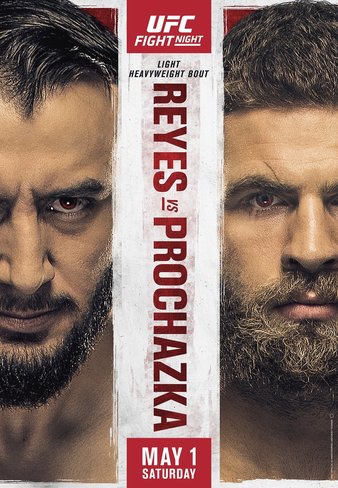 Should have take the bet! Wath a fioght and wath a KO from Jiri!

Just watched the Jiří vs. Reyes fight, WOW what a brawl man!!
I’d cut that horn-e straight up looking man bun off my head. That could have stopped him from sliding out of that sub attempt IMO. Would suck to lose a fight because ur hair was in the way.. anyway great fight!

Jiri will be the next great champion....he took all Dom had and still starched him in spectacular fashion!!!!

"The Devil whispers "you can't withstand the storm".....The Warrior replied "I am the STORM""

"The Devil whispers "you can't withstand the storm".....The Warrior replied "I am the STORM""

Jiri never fought a top 10 with good wrestling. Jan or Glover may take him down repeatedly.

As for is next fight he will probably face Rakik (who as a good chin and good defence). Dont know if he can get the KO here.

Dana White explicitly said the winner of this matchup would be in line for a title shot after Glover.

Jiri needs to rest, and also needs to improve his ground game for a Jan/Glover fight.
Either way, his showing was way too good to not put him straight in there against the champion.

Throughout the night, I constantly had the feeling that we, as fans, were paying the karmic price for last weekend.

Kamaka & Brown at least had good action but the judging, ugh, and then....

Judo throws!! but then robbed of a fantastic finish by the antiquated, meant-to-favor-wrestlers, rule.

Still don't like Giga but have to respect his callouts and I certainly hope he gets either Yair or Holloway.

Almost feel sorry for Usman because his KO of Masvidal was a legit KOTY contender, most years probably wins, and it gets nearly instantly overshadowed.

5 fighters to be excited about for their next fight: Jiri, Reyes, Strickland, Merab, and Stamann & then at least interested in Pinheiro and/or Giga (although I'll definitely be rooting against him)

When bad judging is your best friend for the night

He wouldn't have gotten the idea to knock Reyes out with that elbow if it hadn't been for that antenna.

Missed my picks because I'm an ******* but damn Giga surprised the **** out of me, I would have thought Cub could take a decision. At least I didn't have to take that liver kick, dayum.

I'll admit when I'm wrong, and I was incredibly wrong about Giga. Not that it matters, but a giant grin came over my face because I had been calling him a can crusher. Sometimes you just gotta laugh.

Did Jiri poked Dominick in the eye just before knockout blow. If you don’t believe me just look at the slow motion during the intreview.

I agree with spudgreg..on reyes who cares about dog boy.
Reyes lost his **** after jones dominated him by running away 3 rounds plus.
Jan gave him a free reboot didnt seem to help.
Losing to a guy most though was ******** will force him to adjust.

Jiri is something special, but are they pushing him too quickly? He even said in a post fight interview he wants to enjoy the journey, very smart individual. He doesn't feel like he's had enough time in the Octagon, and that's very indicative of the mind set he has, where as most fighters would be calling out Jan he still wants to work his way up.

'My gut is saying Jiri for this one, I don't think Reyes will recover if hurt either. He's only lost to the best so far, but he had his chance and now it just seems like things are lining up for Jiri to make an impressive performance.'

And that's pretty much how it went

The biggest thing people seem to under estimate about Jiri is that chin. Dude has a chin of steel. this is back to back fights now he's been hit with big shots and just kept going.

"Only the strong survive"

It will definitely be interesting to see how Jiri deals with a good wrestler.  He is fun to watch that is for sure.

"Only the strong survive"

Problem is in that division right now there isn't an elite wrestler in the top 10-15. Glover ground game sure but his actual wrestling to get you there isn't high level. Ankalaev maybe? After the head movement we just saw from Crute that idea is out the window lol. Jiri is here at the perfect time right now. No Corey Andersons to deal with.

It could've been worse!

Absolutely stoked for Jiri Prochazka. That was fantastic, but pls clean up that defense.

Been a fan of his fights since even before his RIZIN debut back in 2015, and his current success is no surprise to me. Hell, if you watch his fight against Vadim Nemkov from 2015, it's painfully obvious that both of those guys were better than 80% of light heavyweights signed to the UFC or Bellator skill-for-skill. And that was when both were a fraction of the fighter they are today.

Since then Nemkov has evolved his game tremendously. But Jiri? He's improved, but he's way too comfortable letting himself get hit and that worries me. Luckily LHW is trash so the former title-challengers he just KTFO'd back-to-back were pretty subpar compared to previous years, but still.

Jan catches him with shots that Reyes did, and Jan won't let up like Reyes did. Jan won't be as predictable as Reyes after hurting Jiri. Dude mixes it up beautifully and won't throw the most basic combos that Reyes is known to throw that allows Jiri to avoid every shot while hurt without even thinking.

He needs to clean up that defense. Otherwise I am incredibly stoked at the idea of a Jan/Jiri fight. That would be beautiful. His defense isn't even 'bad' as his head movement is pretty great for a larger guy, but hopefully he doesn't hold his hands close to his hips when fighting someone like Jan - or Glover. Those guys can and will do some serious damage if given the chance. And they're both vets. If they get Jiri in any kind of trouble, they're far more likely to capitalize than Reyes or Oezdemir were/did.