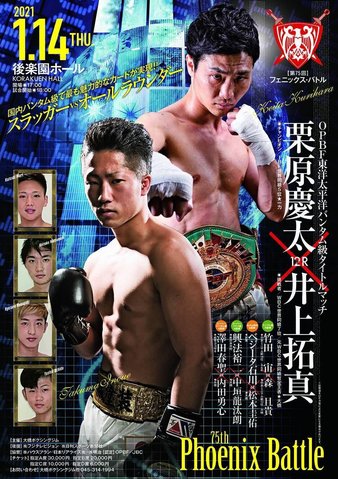 Fantasy picks now lock at Thursday, January 14 at 3:30am ET

Minato vs. Kuwahara Changed from Confirmed to Cancelled

Kurihara vs. Inoue
Takuma Inoue, DEC
This fight could be closer than most people expect as 4 of Keita Kurihara's 5 defeats came early in his career back between 2012 and 2014. Even his most recent loss is back in 2017. I still think that Takuma Inoue will just edge it but it will be interesting to see if he can handle Kurihara's power punches. That's another thing to consider; 13 of Kurihara's 15 wins have come by KO. It will be interesting to see how tough Inoue's chin is but I think he'll survive. This fight will either end with a decision win for Inoue or a KO for Kurihara and of those two scenarios, I think a points win for Inoue is more likely. As I said though, I don't understand why only 6% are picking Kurihara as even though I personally think Inoue will win this, I am certainly not writing off Kurihara's chances here. One things for sure, this will be a great fight to watch!

Matsumoto vs. Ishikawa
Bejita Ishikawa, TKO, R1
Someone please explain to me just how this 1-0 novice is going to overcome Ishikawas Lazer Beam eye????

I love how Ishikawas pick percentage has steadily increased since I revealed that he has a Lazer Beam eye in his profile picture!!!

Matsumoto vs. Ishikawa
Keisuke Matsumoto, DEC
I just saw what you meant, Mikey! That’s actually a thing from Dragon Ball Z, it’s for reading your opponent’s “power level.” I hope he doesn’t find that Matsumoto’s is Over 9000!

Kurihara vs. Inoue
Keita Kurihara, TKO, R5
You're definitely correct in your assessment of this fight Stephen. Kurihara has some losses, but none in a long time. He is also the reigning, defending OPBF Champion (Oriental Pacific Boxing Federation, a prestigious Title in Asia, kinda like the European title) Oh yeah he's also a BANGER!!!!! A Naturally bigger puncher in size and power. Inoue is the brother of P4P rated Naoya Inoue. But he's nowhere near as accomplished. I mean it's pretty hard to be in the shadow of your top 3 P4P, 4 weight World Champion brother who is also 1 of the P4P hardest punchers in all boxing!!!! Takuma has not been blessed with his bros punch power, a more technical style, usually going the distance. Again, this is Japan, 5 losses mean less than what the Western Boxing audience expects. This is a close fight kurihara is the Champion here.

Yeah this guy makes a big deal of his ring entrances and costumes. It's like it's own big production!
Honestly, 1 of my favourite things about becoming the boxing editor is discovering the Japanese boxing scene. It's full of characters, great promotions, events, I love the even matchmaking and there's plenty great fights and fighters!

Yeah after a few months of making picks on all these boxing cards it seems like Japan has the most even matches, even on under cards.

Man I feel so dumb, I missed all the rizin fights and other Japanese new year fights because I was mistaken about the time zone differences and I slept through all of it thinking it was the next day. I missed the only fights for like 2 1/2 weeks.

Mori vs. Takeda
Sora Takeda, DEC
Both these are winners of Japan's Rookie of the Year tournament, 2019 and 2020. Again, another even fight people. Mori is 7-0, Takeda is 6-1,he lost his debut so is on a 6 fight win streak.Either man can win this!

Okinori vs. Nakagaki
Yuji Okinori, DEC
I'm surprised to see it so lopsided here. Okinori is 10-5, do people not look at boxrec?


The younger Inoue   returns to the ring on Thursday at the heralded Korakuen Hall in Tokyo, Japan against OPBF bantamweight titleholder Keita Kurihara in a bout to be aired on delay by Fuji TV nationally. It will be Inoue’s first appearance in 434 days.

This fight is being hosted by promoter Hideyuki Ohashi (Phoenix Promotions) especially for TAKUMA INOUE (main task: not to fall).

It was Inoue’s first world title opportunity, but it’s important to note that it should have come three years earlier. Coming off his crowning as Prospect of the Year, Inoue was scheduled to face then-WBO bantamweight champion Marlon Tapales on December 30 of 2016. It was to be a crowning moment on the same card as his brother’s title bout against Kohei Kono on a major end-of-year card in Japan, where most of the country’s biggest bouts land. Unfortunately, Inoue suffered a hand fracture in training, one that turned out to be much worse than originally expected. At first, the thought was that Inoue’s title shot would merely be postponed until 2017, but then the spring of that year rolled around and he was still unable to use his hand.
When he did return, he did so mostly at the upper reaches of the domestic scene in Japan, rather than on the world level fast track that was thought to be paved for him.

Though he has been out of live action for almost a year and a half, he has been able to enjoy the highest caliber preparation possible under the circumstances. Naturally, he’s spent time training with his brother, and the two engaged in a month-long camp together in Shizuoka, primarily focusing on strength work. Takuma also sparred Kosei Tanaka, whom he hadn’t sparred with since they were in high school, as Tanaka prepared for his New Year’s Eve bout against Kazuto Ioka.
He is clearly talented but feels his best attributes are his stamina, toughness and ability to keep up a high work rate. His father, Shingo — who trains him alongside Naoya – agrees: “He uses speed and a lot of punches during a bout.”
He’s got impressive boxing skills, speed, stamina etc. However, there is one thing he appears to be missing: POWER.Takuma, his father and Mr. Ohashi all seem to agree on that. Instead of just throwing strong punches the consensus is for him to mix his shots up.

“I would like to be able to throw stronger and weaker punches alternately,” he explained. “I would like to add accents to my punches with respect their strength. If I can do so, I will be able to become a world champion just like my older brother.”

Power is something Naoya seems to possess in abundance. Takuma acknowledges that some people compare the two brothers: “I know that some say so. My strength is the same level as my older brother in sparring. If I can improve and hit strong and weak punches alternately, I am convinced the knockouts will come.”

A***,
BRO I love that you are engaged in the boxing threads. But your big breakdown, I started reading and I was thinking "this sounds familiar" then I realised that I had read this article on Boxing Scene the other day!  You've just copied and pasted the entire thing! Haha
Here's me thinking that there's a new boxing expert on the Tapology forums for me to talk the finer points of boxing only to find out that you're a BIG PHONEY!!!!

Mikey, fight Kazuto loka vs Kosei Tanaka  hosted by an independent promoter. but now - no!

Ryutaro Nakagaki defeats Yuji Okinori via KO/TKO at 3:00 of Round 2

Keisuke Matsumoto defeats Bejita Ishikawa via KO/TKO at 3:00 of Round 3

Uchida vs. Sawada Changed from Confirmed to Cancelled