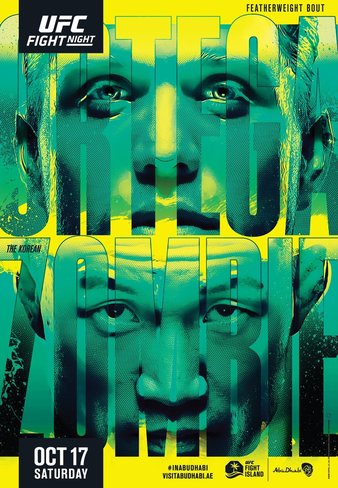 Ortega vs. Jung
Chan Sung Jung, TKO, R4
This is a hard one for me because of where the line is at. There's good value on Ortega despite Zombie never having been submitted, simply for the fact that he might not be as cautious of the ground game as he ought to be. That said, post-military service Zombie has looked absolutely amazing, and it's hard for me to pick against him here. Brian will have size but not the explosiveness or the speed to match Zombie on the feet, and unless he's spent the last two years drilling TDs his path to victory rests in the Zombie's hands. Smart game plan from Zombie should mean a pretty clear cut victory.

Gane vs. Delija
Ciryl Gane, TKO, R2
No heel hooks this time. Let's see some of the KB experience in the cage here, in my head I envision solid teeps keeping Delija away until he get antsy for a takedown and gets sprawled or caught by Gane for the TKO. At these odds though it's dog or pass IMO cause Delija is the best fighter Gane has fought outside of Boser.

Andrade vs. Chookagian
Katlyn Chookagian, DEC
I get it. We all hate her. I hate her. But I think she takes it by a boring decision. Not because she's going to be bigger than Andrade or anything like that, it's just Andrade can get jabbed up and stifled on the cage, which is essentially Chookagians bread and butter. Definitely rooting for Andrade though because her vs. Valentina is the best fight at 125 imo.

Bukauskas vs. Crute
Modestas Bukauskas, TKO, R1
Very shocked at these odds. I favor Jimmy Crute, but not as much as the bookies. I'll take a shot on Bukauskas inside the distance, imagine I'll get +450ish.

Almeida vs. Martinez
Thomas Almeida, TKO, R1
Good fight and good matchmaking. Should either be a quick KO for either party or a long war that ends in Almeida's hand being raised. I'll say Almeida by body kick, and since he's only at -145 on my sight this might be like my only non-prop bet on this card.

Silva vs. Krause
Claudio Silva, SUB, R2
These odds piss me off. It's kind of making me pick against Krause. It opened at even money but I missed that line, now there is absolutely no value in Krause. Silva by submission or pass. As for who wins? Could be a close fight, Krause has been doing live rounds with Dawson, Minner, Croom, and Molina who have all prepped/preparing for their octagon performances. So, I have no doubt he's in shape and ready to go, but he has nobody in his gym even remotely close to Silva's style. I want to be wrong, and I'll be rooting for Krause by lead knee, but the value is on Silva now.

Gamrot vs. Kutateladze
Mateusz Gamrot, TKO, R2
Not even a good parlay option at this point. Odds for this card are just trash, especially after last card had such great odds and solid dog bets.

Robertson vs. Botelho
Poliana Botelho, DEC
Here's some decent value. Watching tape Poliana is a live dog simply for the fact that she's consistent. We never know what Gillian we'll get, but at almost 3:1 it may be worth taking a shot on Botelho because it's 3:1 that Gillian shows up looking like she just rolled out of bed vs a canadian who just found out someone stole their maple syrup.

Park vs. Phillips
Jun Yong Park, DEC
Meh, hard to pick since this will likely take place on the feet and John Phillips has some moderate power. But 8/10 times Park weathers it and wins the fight IMO.

Antigulov vs. Grishin
Maxim Grishin, TKO, R2
I love a little Rusky on Rusky action. Dog or pass again here, Grishin eats unneccesary punches, not often enough to make me think he shouldn't be a favorite, but not enough for me to consider betting or parlaying him at -300. It feels really hilarious to talk about someone eating unnecessary punches when they are fighting Antigulov who is the king of eating unnecessary punches. Most likely Grishin by his weird half-Tyron Woodley half-TaeKwonDo blitzes where he lands vicious straight punches.

Nurmagomedov vs. Striegl
Said Nurmagomedov, DEC
Said should win a clean UD here, maybe locking up a submission in the third round. Once again, trash odds.

Ziam vs. Mullarkey
Fares Ziam, DEC
Need to research this one a bit more. Kind of a close fight in my eyes just going off my memory of these two, and the odds indicate the same.

Gamrot finishes Guram in second round via ankle lock

Should be a interesting fight..

Gane vs. Delija
Ciryl Gane, TKO, R3
These odds are horrendous. A heavyweight fight should never be this lopsided.

Silva vs. Krause
Claudio Silva, SUB, R2
I love The James Krause but this is not a good fight to take on short notice. Silva should be the favorite by the time the fight starts, I'm betting early to get dog odds.

Gamrot vs. Kutateladze
Mateusz Gamrot, SUB, R2
These odds are garbage. If Gamrot was under -200 it would be worth it, but Kutateladze has serious KO power and he's been training at Allstars so who knows what kind of improvements he's made in the last year.

Antigulov vs. Grishin
Maxim Grishin, TKO, R1
I don't care how many times Antigulov loses, I hope they never cut him. One of the most entertaining fighters in any organization.

Nurmagomedov vs. Striegl
Said Nurmagomedov, SUB, R2
What the hell are these odds lately?

@FISH, alright I looked into it, I bought 100 at $9.80 Let us see if you're the golden tench or the bad luck barracuda. I'm gonna come back to this thread in 2 years. Mark your calendar!

This just in, I have made 1% profit already.

Yeah, you'll be getting little shifts in direction like that as derivatives traders play the sell/buyback game. It would have been a lot better but Karp dropped dime on the IPO too early out so people had to buy the news. I'd have done it too really but **** him anyway.

Edit: Stonks definitely do not only go up.

Double edit: Unless of course its SPY in which case just pick a random date in a month, buy calls and win because that's just where we are in 2020.

I think I know why that rugby guy beat you up at the bar that time. Eh? How many stocks did you bilk him into buying you pyramid scheming weasel.

@tieoken he lives in Radelaide and you can't miss him his chest hair really sparkles like that.

Radelaidians are pretty ******* awesome I'll say that. It's amazing the **** they get away with down there. I'd got to jail here in QLD for the shenanigans they routinely get off the hook for.


@fish if you ever run into ♥️Theresa Palmer♥️ can you tell her Your fat hairy Canadian internet weirdo buddy loves her. Not in a creepy murdering way but in a sweet harmless stalker way.
Can you?
I mean will you?

I created this diagram just now Free especially for you. This is how stock trading works.

@Fish, I set a calendar reminder for 2022. It better at least feel like when I find a crinkly twenty I didn’t know I had in the laundry.

TBH I wish it would sell out already but the share cap is massive so it is what it is.If you look at their quarterly earnings it paints a pretty picture, they reported 47% uptick in Q3 and most of their revenue is spooky state **** so it's quite stable. They've really only dipped their toe into private so there's lots of room for growth there and they really only have one serious competitor. We'll have to see how Q4 shakes out. I like what I see.

I want nothing more than for Ortega to get brutally ko'd.

Really? What have you got against Ortega?

He's a punk ass who smacked zombies translator and acted tuff it was sad. He ******* calls the kid out on social media saying he's gonna smack him. Then he waits till zombie goes to the bathroom to go smack the kid during a ufc show. It's all cheesy and pathetic. Hope his punk ass gets slept.

I missed that. Definitely ******y. Probably got CTE after the cheeks-parting Holloway put on him TBH.