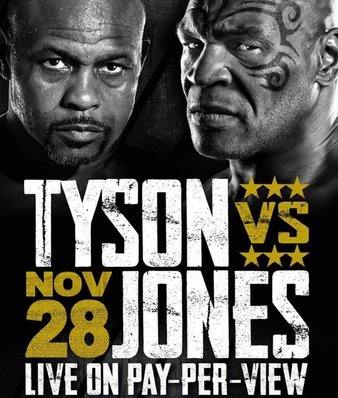 "Life is always better after a big poo."

im looking forward to this silliness.

"“Every man must believe in something; I believe I’ll have another drink.”"

Definitely hoping on a good stream for this. Curious too see if Tyson has that early KO power, and if not how far his gas tank goes. Just wouldn't buy it, that's for sure

I usually like to a see a really exiting war between two great boxers but this fight should never have been made. 20-25 years ago this would've been a great fight to watch but not now. It's too late. This isn't two of the current best heavyweights in the world fighting, it's two boxing legends who are both in their 50's and are at a much higher risk of getting hurt. There's still plenty of skill left in both of them, I've no doubt about that but I feel that this isn't the way to use those skills. If they want to stay in the fight game then they should use their knowledge and experience to train young fighters or do some punditry work. That would be the best way for them to carry on in boxing.

I don't care who wins. I just hope that they take it fairly easy and nobody gets hurt.

Ma, I feel dirty for even adding this to the schedule!! 2 of my heroes going at it as a pair of 55 year olds is not something I want to see.
I only included it because it made such headlines and no doubt a lot of people are interested, for whatever reasons.
Also, ****** Jake Paul fighting Nate ****** Robinson, SMDH!!!!
Anyway fights been postponed already, from end of September til November. Apparently they think they can drum up more PPV buys from suckas!!! I really hope this thing gets cancelled all together and I can be happy watching highlights from their prime rather than watch whatever this will be

This ppv is an obvious cash grab and the main event fight is a farce. Nuff said.

@mikey they actually post pone because they hope covid is over and they can have fans watch live  in the arena which equals gate money concessions money merchandise money.

Being an exhibit are they drug testing?
Tyson is pissing hot no idea what but that ain't natural.

I doubt they will cause of the exhibition classification. Imagine Jones and Tyson talking "yeah we'll just spar and make a hundred million"
Then Tyson comes out juiced and knocks him out.
Lol

Yeah, it's being postponed because they want to squeeze more money. Whether it's tickets or PPV buys its all money, SUCKAS money!!! 😁💵🤑

As for drug testing? I highly doubt it. Yes, Tyson is definitely taking more than the Toad!!!  And Jones Jr.,while I hate to talk about it, he has some shady issues with failing drug tests in his heyday too! Failed a test back in his prime but because of admin errors with the WBA, I think, he never received a ban and kept his titles.

Yeah, they're likely both on TRT.  I don't know what role the Commission are playing in overseeing the event. They can't even decide if its an exhibition, if Knockdown are allowed, apparently no one can win a decision but they aren't allowed to fight for real??? Like *** is this ****?????
Please end up cancelled!!

Wait, wait, wait... If no knockdowns (and I'm assuming by extension no knockouts) are allowed and nobody can win a decision then how can either of them win? That would make it impossible for it to be anything other than a draw (or a no contest or DQ but they don't really count as a result). If that's the case, then it's a rigged fight as far as I'm concerned.

As I said earlier in this thread, this fight shouldn't be happening anyway. If they want to stay in the fight game then they should do it by training young fighters or by doing punditry work. Evander Holyfield has done some great punditry work, they should take a leaf out of his book.

I've heard the head of the California commission, Andy something(I forget), come out and say that the referee will be under instruction to not let the boxers get carried away and try to hurt each other!!!
Then you hear Tyson and Jones saying it's kill or be killed!!!
Whole thing is a GIANT **** show mate!!!
I have no idea what to expect if it actually does happen. Actually, I do, I expect to be sad!!!

And yeah, I have heard it said that no one can win by decision!
The Knockdown thing is just from the commission guy saying that the referee is under instruction to not let them go too hard!


@Stephen Terry
>Wait, wait, wait... If no knockdowns (and I'm assuming by extension no knockouts) are allowed and nobody can win a decision then how can either of them win? That would make it impossible for it to be anything other than a draw (or a no contest or DQ but they don't really count as a result). If that's the case, then it's a rigged fight as far as I'm concerned.


It is not real fight, it is an exhibition fight. That's why there are no judges. If there would be judges it would have a competitive character and it would not been seen as exhibition bout anymore.


So the result is of course 'No Contest', as there is no contest. Only an exhibition.

I know this is just an exhibition circus fight designed to make money but if no one can win then it's just a training session as far as I'm concerned. If the fight goes ahead then I certainly don't want to see either of them getting knocked out or hurt and I could understand it if it was a no knockdown fight or a "body shots only" fight but in that case, I would like to see some judges because if there's no chance of one of them winning, even if it's just the for the pride of winning, then there's no point to this. Neither Tyson or Jones Jr. have anything to prove by doing this. They don't need to fight and frankly, they shouldn't. The organisers of this should be ashamed of themselves.


>I know this is just an exhibition circus fight designed to make money but if no one can win then it's just a training session as far as I'm concerned.


Of course it. The Head of CA State Athletic Commission names it precisely like that.


>We can’t mislead the public as to this is some kind of real fight.
>“It’s an exhibition. They can exhibit their boxing skills, but I don’t want them using their best efforts to hurt each other. They’re going to spar hard, but they shouldn’t be going for a knockout. This isn’t a record-book type of fight.
>t's going to look like a boxing match. Exhibitions like this happen sometimes. They can move around and make some money.

It was never anything different. I don't know why this show event is listed here.
If they the CA State Commission would have sanctioned it with judges, it would have a competitive character and the Head of the CA State Commission would be in lots of trouble why is was sanctioning such a bout. Thus there are no judges and there can't be a contest for non-contest show event.

I agree that it shouldn't be listed on this site for predictions as Tapology doesn't allow you to predict a draw. Whenever a fight you've predicted ends in a draw it doesn't get counted as either a correct or incorrect prediction, it just doesn't get counted as anything. Therefore, putting predictions in for a fight that can't be won is just a waste of time. The best we can hope for is that this ends up getting cancelled or some real fights are put on the undercard otherwise the leaderboard for this event would just have everyone tied on 0 points.