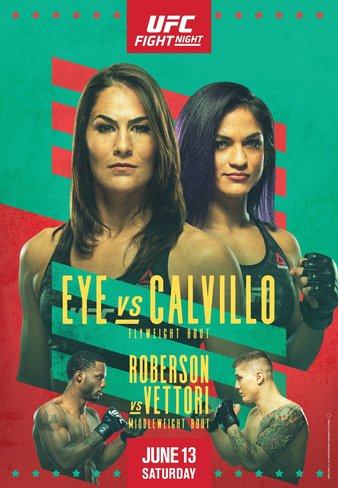 Moraes vs. Yan Changed from Rumored to Confirmed

Zhumagulov vs. Espinosa Changed from Rumored to Confirmed

Ibragimov vs. Dolidze Changed from Rumored to Confirmed

Moraes vs. Yan Changed from Confirmed to Cancelled

Ibragimov vs. Dolidze Changed from Confirmed to Cancelled

Zhumagulov vs. Espinosa Changed from Confirmed to Cancelled

Antigulov vs. Abreu Changed from Confirmed to Cancelled

The Ufc is mad is they think Eye vs Calvillo is a main event of anything. The Ufc card ordering has been shocking latley and the person who thought this was a good main derseve to get shot for subjected the fan to five rounds of this fight

Most likely not the main event. They’re most like getting negotiations together for the main event but but needed to list something in the meantime. Ivanov vs Sakai was listed as the main until the Woodley vs Burns bout was finalized too.

... if it is, agreed that it’s a poor choice of a main event. Vettori vs Roberson is a higher caliber fight in my opinion (that’s not main event worthy either though).

I guess I stand corrected, it’s listed at 5 rounds smh...

Eye vs. Calvillo would be fine if it was placed in the middle of a fight card. Having it as a main event on a fight card is a huge reach. Both fighters have an average MMA skill level and Jessica is criminally overrated as a top women flyweight.

Eye vs Cavillo is the fight to you watch with your GF the day she decides she gets interested in MMA so that this interest never develops further.

A terrible main event to a terrible card. Eye v Calvillo would be a okay co-main event but a horrendous main event. Why couldn’t they be on the co main and Petr Yan vs Marlon Morales headline? This is ********.

"If you jingle my bells, you will have a white Christmas, "

I’d rather see Roberson vs Vettori or Fili vs Jourdan headline because those are the actually exciting fights of this card.

"If you jingle my bells, you will have a white Christmas, "

I Just want to know who is Jessica Eye sleeping with to get a main event. But seriously, i never seen so much love from the UFC for a fighter who has shown to be non deserving of it. Maybe she is easy to negotiate with the matchmakers and pay structure.

Eye vs. Calvillo
Cynthia Calvillo, DEC
Jessica Eye to a crowd of fans " I want you to repeat after me, Here we Go Evil, Here we Go. WOOF WOOF!!! Crowd" crickets*.

Lipski vs. Carolina
Luana Carolina, DEC
What a profile pic for AL. However the black girl gonna beat her standing up.

Benoit vs. Nam
Tyson Nam, DEC
2 more ******* cans. Worst fight card in history. No cap. Nam looked sharp in his last fight although he lost. Who the fok is RB?

Roberson vs. Vettori
Marvin Vettori
Seems obvious but kid got way to emotional..might be a bad pick.

This is possibly the ****tiest card I've ever ******* seen to the point I'm about 85% certain I'm not even going to watch it even in such an advanced state of MMA deprivation. It's pretty much an insult to my life to watch this even if I have anything even extremely marginally better to do, which includes cleaning the shower.

Absolutely infested with bumfights and WMMA bouts which are trash even by the standards of WMMA which is net garbage. I don't even know what the trash equivalent of Avila vs Rosa is. Certainly not something you'd be allowed to drop off at your local tip. That fight is the sort of waste that is incinerated in an underground facility that isn't listed in the phone book or is sealed in a drum and dropped into the Marianas trench.

Agapova vs Gatto? Go **** yourself with your 5 years of service Trophy Mr Shelby. If I wanted to see that **** I'd pull up a chair in the Seer's shoe aisle during a black Friday sale. How dare you.

What else we got--oh,J'en reviens Pas! Here comes heart throb Luana Carolina sliding out of the brown paper bag, who will no doubt fight like a Biafran defending a NATO airdrop from some scavenging animal against the single most disappointing WMMA prospect in living memory in a fight nobody asked for, will ever want to see again, or ever wanted to see in the first place. Best you can hope for here is that Luana eats off Lipski's fight shorts.

I mean seriously why even bother? A bad product is worse than no product at all.

Imagine you're out somewhere and decide you want something to eat. There's no vendors around but there's a local Italian place that still has the lights on and the door open. So you waltz in. It's late, they're about to shut. The waiter tells you the cooks have gone home for the night, but he can bring you something regardless. 'Why not'? You think.

So he shuffles off to the bathroom and expels the enormous turd that's been pleading to be expunged since the beginning of his eight hour shift, scoops it up along with some of the toilet water and places both in a finger bowl, plops in a stick of celery and presents the entire abomination to you with a short bow, gesture of his hand and a 'bon apetite'. And it costs 49.95$.

And the celery is Roberson vs Vettori. It's not that great to begin with, and it's definitely not made more tempting by being immersed **** soup.

The UFC is getting paid by ESPN, so they don't have to put great cards together anymore.

I do believe my buddy tepid is correct. I'd also like to say @fishrant ...shut up.

Also it's probably the co main... No seriously though. Seriously?

10 million per fight card by ESPN and they could have 2 Amateurs headline and get paid the same amount. Zero ****s by the UFC because they have guaranteed cash flow.

It is a fight night though! Only so many stars and champions available. Some like stipe are refusing to fight right now due to covid 19

Yes I don’t understand what the fuss is about.

We’re not even sure who was available and when, a lot of these cards are being thrown together very quickly.