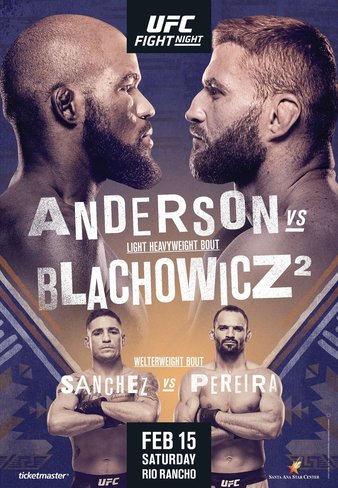 Just got to the hotel, Casey Kenney is staying on my floor and theres a fighter cutting weight in the hotel gym. ****s great

Playing devils advocate Corey Finishes Jan dominantly does he jump Reyes in line?? I personally think he deserves it if he wins regardless. Thoughts?

i think corey wins, prolly 50-45 or 49-46, im not sure he finished jan. does that earn him a title shot? yeah it should but after the reyes rematch. i would think he would be in line for the winner of that one.

That actually is pretty impressive Damien. He made it a whole 1 day.

So the hotel I'm staying at is where the weigh ins are at, wild stuff

Just was in the elevator with Jan, crazy stuff

"Complicated Human in Search of Simplicity"

Anderson vs. Błachowicz II
Corey Anderson, DEC
this might be a good fight this time around, but if it's one-sided then i see corey using his athleticism to frustrate jan.

De La Rosa vs. Borella
Montana De La Rosa, SUB, R2
mara might be able to stuff montana, but if not then she'll probably get tapped.

Means vs. Rodriguez
Tim Means, TKO, R2
don't know enough about rodriguez to say he gets the upset.

Dodson vs. Wood
Nathaniel Wood, DEC
dodson won't engage enough anymore for there to be much of a fight, but the judges have grown tired of his game.

Holtzman vs. Miller
Jim Miller, TKO, R2
i'm not saying jim is in a resurgence, but i think he's gonna fight like he knows he's down to his last few. i'll say jim tags him standing, forces a bad shot, then finishes with gnp?

Clark vs. Townsend
Devin Clark, DEC
hard to disagree with odds here too. looks like devin needs a bounce back and i think his defense might hold up this time. maybe.

Kenney vs. Dvalishvili
Casey Kenney, DEC
hopefully fun scrambles. something is telling me kenney ends up on top, but i hope i'm wrong.

I don't get how Borg miss weight and Bontarin didn't, Bontarine look so much bigger then borg as their similer height but Bontarin is way more jacked and im thinking Borg hasn't been putting the work in

"me fail english that unpossible"

"Complicated Human in Search of Simplicity"

"I ain't the same person I was when I bit that guy's ear off." -Mike Tyson

Don't know what UFC expected letting Borg have a flyweight fight when he missed bantamweight 2 fights ago.

Anderson vs. Błachowicz II
Corey Anderson, DEC
If that fight between Anderson and Johnny Walker never happened, I would've most likely backed Jan Blachowiçz in the rematch. BECAUSE I ALWAYS thought that Anderson was "just average". You ALWAYS saw these glimpses of a different fighter, but he well, for a lack of a better word, has always under-performed to me. Never lived up to his full potential. He's got the tools, the athleticism, the smarts, the camp, everything was goood to go except he was missing something. And he showed me with the Johnny Walker fight, that he has found that missing piece called "Killer Instinct". He FINALLY looked like the Corey Anderson we've all knew "he could be". I'm not sure if it was the birth of his child, or the clearly noticeable dislike & overlooking behaviour of the UFC & Dana White, or if he's just figured out that the world WANTS to see the "Savage Corey Anderson", but whatever it was.... It's sparked a fire in Anderson. And he's gonna burn Jan Blachowiçz down t just to obtain his rightfully deserved World Title Attempt vs. Jon Jones.

Sanchez vs. Pereira
Michel Pereira, TKO, R1
Honestly, this is some interesting matchmaking here. I reeeaally don't know what to expect here. On 1 hand, I respect the UFC for granting Diego Sanchez' wish for a guaranteed firefight of a slobber-knocking, fan friendly brawl. But on the other hand, I reeeaally don't like that the UFC set Diego Sanchez up for a guaranteed firefight of a slobber-knocking, fan friendly brawl that can & possibly, maybe, probably, will end veryyyy badly for Diego, in what will probably be his last UFC fight in his native state. Annnd "IF" it does play out with Diego crumpled on the canvas, in his last fight in front of his family, friends and fans, theeeeen that's reeeaally ****** way to end it. But....... Of course you can't count out Pereira's 5 minute gas tank going dry. If he can't finish Diego in R1, then he's ******. And Diego can do as he damn well pleases with Michel Pereira's limp corpse. But......... Considering how much tread has worn off on Diego's tires is cause for concern. I just simply cannot be confident in a 2020 version of the original "Ultimate Fighter".. Annnd I fully expect Sanchez to fall victim to a 1080°, Double Corkscrew, Flatspin Frontflip, Spinny Axe ****** Kick, before the close of R1.

Borg vs. Bontorin
Rogério Bontorin, DEC
Geeeeezus ******* christ. Whatta ******* bum. This fight is the tale of two sides, BEFORE THE FIGHT EVEN STARTED. We have in the blue corner, a guy who literally didn't eat a ******* thing, for 3 days in order to make the Flyweight Limit, and successfully completed the task at hand. (Might I add, Bontorin spent his entire career outside the UFC, at Bantamweight) Annnd in the Red Corner, we have a guy that claimed he was rededicated to his career, & was making big changes in his lifestyle that was gonna ensure he'd NEVER miss weight again, and that "IF HE DID" He'd retire from MMA for good. Annnd then he misses weight the very next fight. Whatta ******* bum. Like I felt bad for the guy at first. But now he reeeaally irritates me. Call it wishful thinking, but I wish for Bontorin to flatline Borg. Tho it's very highly unlikely.

Medeiros vs. Vannata
Yancy Medeiros, DEC
If you like to watch two guys, who like to either 1) use their face for defense from other strikes, or 2) drive their face into the other's fists, elbows, & shins over & over, then boy do I have the fix for your cravings.....

Anderson vs. Błachowicz II
Corey Anderson, DEC
Corey has all the tools to dominate Jan, and win however he wants. I think it’ll be a decision. The same level on the feet, way better wrestler, cardio, and he recently got killed instinct, plus he already smashed Jan before, and I expect the same.

Sanchez vs. Pereira
Michel Pereira, TKO, R1
Diego seems very battleme worn, and Michel has serious power and fun tricks up his sleeve. I wouldn’t be surprised if Michel gassed himself out and Diego won a decision, but I think Michel should get a KO in the first 4 and a half minutes.

De La Rosa vs. Borella
Montana De La Rosa, DEC
Pick em at it’s finest. Two girls with similar looking names with nothing special about them who are coming off losses. I guess to be fair to both of them, Andrea Lee and Lauren Murphy aren’t exactly ‘bums’

Weaver vs. Vargas
Brok Weaver, DEC
Weaver really impressed me on the contender series, and I expect the same here. 30-27.

Borg vs. Bontorin
Ray Borg, DEC
I know Ray missed weight, and it did piss me off, but I still think he will wrestle his way to a decision. Don’t change your pick because of a weight miss.

Medeiros vs. Vannata
Lando Vannata, SUB, R2
Lando is flashy, and he’s got the ground game, Yancy has power and ok striking. Lando via armbar.

Means vs. Rodriguez
Tim Means, SUB, R2
Tim is a vet, always puts on a show, and even when he looses it is never in vain. He always shows up. I don’t know this Daniel Rodriguez guy, call me a casual I don’t give a ****.

Dodson vs. Wood
Nathaniel Wood, DEC
Tough fight to pick but I think the prospect gets it.

Holtzman vs. Miller
Scott Holtzman, TKO, R3
Scott is faster, younger, more power. Jim is getting up there, and if he catches Scott In a submission then great! I want that! I like Miller! But it’s never going to happen.

Clark vs. Townsend
Devin Clark, DEC
Both of these guys kind of suck, so it comes down to who sucks more. Clark via Decision.

Clark vs. Townsend
Devin Clark, DEC
He shouldn't be @ the odds he is. I feel like Dequan can KO him charging in just because Clark is chinny, but if I have to say what's more likely Clark getting the DEC appears to be.