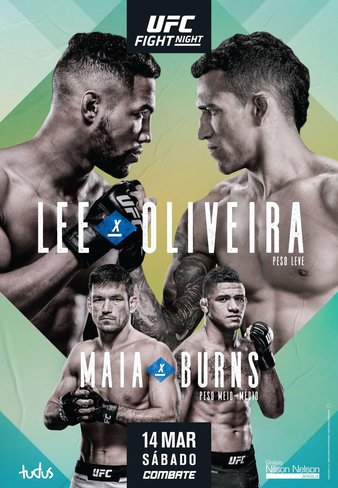 I'm a fan of Maia, but I'm afraid that because of his age, they will write him off

Well... Those w/o ESPN+ can thank the coronavirus for cancelling EVERYTHING except for the UFC, & because ESPN has no college basketball or NBA to air on TV, they're just gonna throw UFC FIGHT NIGHT on ESPN

wow thx for the stare downs

All could possibly made from this display is that UFC fighters clearly are incapable of picking their own clothes or hair styles cept the girls they did ok lol.
Oh and that Johnboy is ******* crazy intense wow hes almost as crazy as fergy.

"You can do anything all you need is will power"

Lee vs. Oliveira
Charles Oliveira, SUB, R1
i think kevin lee will be too eager to engage on the ground.

Maia vs. Burns
Gilbert Burns, DEC
i think burns wants to test himself on the mat, but i think he'll also just rough demian up with his shots.

Moicano vs. Hadžović
Renato Moicano, DEC
moicano has competed against some of the best and looked decent, though hadzovic could just bomb on him. hoping cutting less weight gives moicano more durability.

Walker vs. Krylov
Johnny Walker, TKO, R2
this one might be fun. i don't wanna say walker's train is derailed yet, krylov leaves enough openings for him to get it going again.

Trinaldo vs. Makdessi
Francisco Trinaldo, DEC
hope to see more of trinaldo's underrated kickboxing game, but he should have a pretty clear path to victory if he can close distance and push a clinch fight.

Formiga vs. Moreno
Jussier Formiga, DEC
fun scrambles maybe. moreno could win the standup, but i wouldn't bet on him avoiding td's the whole time.

Ribas vs. Markos
Amanda Ribas, DEC
randa just kinda relies on overhand into td attempts and i'm not sure it'll work on ribas.

Yahya vs. Barzola
Rani Yahya, DEC
i think it's pretty cool that they have yahya, formiga, and demian all on the card. will all 3 win? not sure, but i still have faith rani can get inside.

Bueno Silva vs. Moroz
Mayra Bueno Silva, SUB, R2
i'll go with hype on this one. moroz looks good once in a while, but at other times she looks lost.

Silva vs. Dvořák
David Dvořák, SUB, R2
no good reason, guess just not confident in silva so i'll take an eastern european guy that i know nothing about.

Macedo vs. Malecki
Veronica Macedo, DEC
maybe bea has gotten better, just don't have much confidence in her ground game.

Thanks DamianD, couldn't find any other videos of the weigh in.

Maia looks very big compared to Burns. Burns moved up from lightweight and Maia is a former middleweight title challenger. Maia could control him for the first 2 rounds and get a boring decision win. Very live underdog.

Renato Moicano looked significantly smaller than Hadzovic and could be at a power disadvantage. Although I think he will by decision there is not much value in him at -340 as he could get KOd.

Optimistically, I'm hoping these fights this weekend and the Columbus card now at Apex center provide a unique intenseness in its spartanness.

The DWCS has that vibe of the octagon isolation without the crowd, not saying it's better, saying its unique, but with only raw, possible up and comers. To fight in same environment with amazing, action fighters will be very interesting.

I think this approach is sustainable as we weather this ******* bioweapon.

Everything else being equal, just eyeballing it at the staredown, Maia and Olivieria are noticeably longer and taller. This is Olivieras moment. I am rooting for him with all I got.

Oliveira is not larger than Lee he is taller yes but the stare downs was shortly after morning weigh ins where Lee hasn't had a chance to fully re-hydrate.

Kevin Lee vs Charles Oliveira
Kevin Lee is a great fighter but he surprising won  about 2 in his last  6 and while Charles is on a 6 fight win streak. But Charles Olivera only decent win in that streak is Teymar becuase Miller, Guida and Lentz are old, Giagos and Gordon are bums and Kevin Lee will smash all 6 of them and . All of Kevin Lee last opponent i think would whoop Charles like Gregor, RDA, Al , Edson , Fergoson, Chiesa and Trinaldo. Charles Olivera is Dangerous but is fragile with no heart  as he gave up like a ***** in the Holloway fight while Kevin Lee has potential  he has bad cardio but Training at Tri Star will help that problem

Demian Maia vs Gilbert Burns
This fight is closed but Demian Maia weakness are wrestler with better striking  then Askren. Burn is Jiu jitsu so the question is can Gilbert  stop the takedown  i say no because Maia is bigger but Burn will survive probley so he need to take him down twice and Burn will make Maia work and i think who ever wins the 2nd wins the the fight and im leaning Burn and i can see it being a draw with Maia winning the first 2 round 10-9 while Burn smash Maia in the 3rd 10-8

Renoto Moiconio vs Damir Hadsovic
Damir is a bum while Renato is a top 10 featherweight while being at lest a top 25 lightweight, Renato got Ko'd by Zombie and Aldo who are the best ,

Johnny Walker vs Nikita Krylov
first off all Johnny Walker is poweful but i think the Move to Tri star is bad for him because I think that he craziness it what make him a Ko artest but if he calm he a bum who get Ko'd by the decsion machine Corey Anderson suck and fought bums in Khalil , Flat Earther vegan bum Ledet and Circunuv is chiny and  Nikita Krylov is decent  with wins over OSP and Walt Harris and only been Ko'd at heavyweight, If he can't Ko Corey anderson then u not Ko Krylov  and he will finnish u because he a bad man with the same name as an Elton John song so u know he got bullied back in the

Trinaldo vs John Makdesi
Makdeisi sucks and he win are over the worse of the worse and he got wheelkick by the disappoment in Vanita
while Trinaldo is old he still great where he got robeb in his last fight and wins over Dunham, Felder, Green and

Jussier Formiga vs Brandon Moreno
This might just be the fan pick but i hope Moreno whoops  Formiga because we need more exiting flyweight and Fomiga has an effective  and boring fight style with no personalty, but he a bit of a buzzkill beating more exiting fighter like Pettis and Figurado and we need more fighter like Moreno in the title picture, And if Formiga beat Figuraido again and become champ it be the end of the division because Figurado is the future  with personalty and a exiting fight style. and i think Moreno will out strick Formiga and stuff the takedown to get a decsion

Veronic Macedo vs Bea Maleki
All these Bum pickers picking the Hottest fighter in because she better tecqnice doesn't respect the size Maleki has on her as she was a flyweight and she fighting a former featherweight. Maleki also has the reach advantage the same as my **** size huge and last for all Macedo is 1 win 3 loss in the ufc so she aint know world beater and the only thing in this fight is going to take a bearting in the fight is my willy

"me fail english that unpossible"

Oliveira to mutch gay for this fight.

Normally, I think, ok, we are in Brazil, I need to lean Brazilian fighter if it goes to decision. However, without a crowd creating influence during and after fights, I tend to think this will limit the natural bias of the judging. Maybe not, we will see.

So many eyeballs will be on these fights, with no crowd to play toward, the judging "should" be more on point.

Going to be one strange looking fight.

I wonder what effect the unusual atmosphere will have on the fighters. I'm thinking it will be harder for them to take the event seriously.