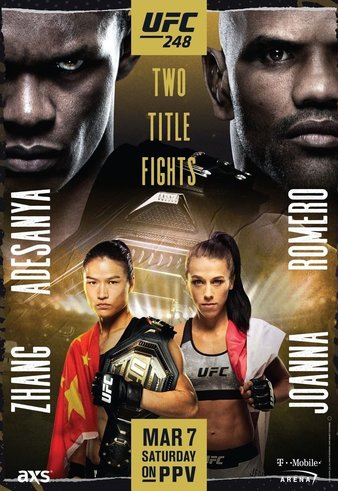 Izzy wanted to cement his legacy and projected to KO Yoel and dance over his body, now he's just showing he's going to get destroyed by Costa

I mean, at the end of the day Izzy will have more chances to prove why he's the champ (whether he succeed or not is another story), but this was the last title fight of Romero's career and he didn't do ****. Yoel's gameplan was trash and he deserves the L

"Now I've got my eyesight back, and you are far uglier than I remembered!"

Wow, Adesanya really is the next Anderson Silva.

Such a disappointing main  after such a great night of fights

can't see how a judge gave 49-46 to Adesanya when Romero clearly got first, second and arguably fifth

Costa beats both of them

They both were just spent from watching the previous fight.

yeah, would've been nice to have Costa here and then Romero-Costa 2 in the next.

seriously who would have thought that fight was going to be like that.....so disappointed right now...oh well

God I hope Izzy a favorite vs Costa. Holy ****, I will clean up. He actually is only really effective off the back foot when his opponent overextends. He does the same thing every time; baits his opponent into throwing a power lead then leans out of it and switches to a cross. Like, he's trying to set that up just about every time. That's why when Yoel stood there he had no ******* idea what to do, he is too reliant on counter-punching. A straight forward marcher like Costa who has endless cardio, really nasty body kicks, straight punches and an hellacious chin as well as endless pressure is literally a match made in hell for him.

Costa by KO/TKO within 3. Defo.

Yoel’s post fight was pure trash. He was mainly responsible for the lack of engagement, look at how he started the first round... what kind of shh was that? A few explosions, far and few in between, can’t win you the fight. Especially considering you’re the challenger... super disappointed.

yoel looked lethargic the whole fight. i think he got nervous and forgot that you have to hit the other guy

what the hell was Yoel talking about in his post fight speech........seriously ??

I haven't been that disappointed since Ngannou vs Lewis.

Izzy vs Costa now is way more interesting and competitive , how blind i was when i think that izzy has a chance agains Jon Bones Jones , any top 5 in the Light Heavyweight Can KO/SUB/ or domitated Izzy .

Don’t post much here but had some thoughts about some potential matchups after this card. Let me know what you guys think.

Both men have won 3 straight. With O’Malley being only 25 and 3 ufc fights he shouldn’t be rushed too hard. Kang is dangerous everywhere and will probably answer a few questions about O’Malleys TDD yet O’Malley will have the striking advantage

Both fighters were booked to fight before and makes sense. Cowboy being 1-3 in his last 4, shouldn’t get a huge step up here. Oliveira will have big xp advantage but Gall is 28 and probably won’t be improving a whole lot more.

Magny had a scheduled fight against Luque about a year ago before it got cancelled.  Should Brown win, Magny is an experienced opponent that would be a good name to have. Should Luque win like I expect, both men are around the top 15 and it would be interesting to see if Luque could finish the usually durable Magny.

Although I think Dariush deserves a bit more of a step up with 4 straight wins, the division seems likes it’s really booked at the moment. Tsarukyan is still a really good prospect, I mean they gave him Islam in his debut. The grappling here would be really fun if he wins against ramos.

Clear No. 1 contenders fight. Should Namajunas win it would be a very fun striking battle. Andrade got dusted in the first fight but I would think the 2nd fight would at least be a bit more competitive

Not much to say here. Costa is the obvious man in line and the most fun fight to make. Costas raw power/aggression vs Adesanyas range/precision. Hope it gets booked soon.

Adesenya was exposed. Costa is gonna murder him.


"They're All On Steroids Bro!"

I almost won this event