UFC on ESPN+ 21: Magomedsharipov vs. Kattar 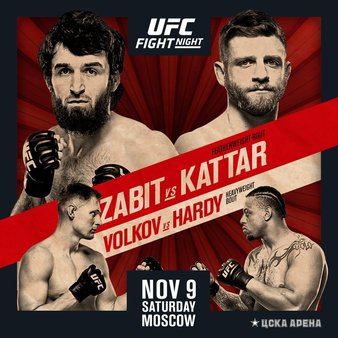 "I threw 6 kicks in 3 fights, more money than I've made in my entire life" - Pat Barry

@Roe Jogan Because Zabit is a massive ***** and is afraid to gas and that why the Best Picker is picking Katter and u can have all my other genius bets if you pay me 59.99 an month

Hardest night of fights to pick all year IMO.

@fishrat those embeddable PNG images are a little tricky. If you just go and edit your picks again, and click save without making any changes, it *should* take care of it.  every once in a while it seems to fail to make the update to the PNG.

@Brown Stevens was figuring him out.... Kattar will have that tape and has more one-punch power which is really saying something. I've picked Zabit...but not with confidence.

Volkov vs. Hardy
Alexander Volkov, DEC
I think Hardy is in way over his head in this fight.

Volkov vs. Hardy
Alexander Volkov, TKO, R2
The last time Volkov made it into a UFC ring he was beating the brakes off of Derrick Lewis until getting caught by a haymaker and put out. That had to be disappointing since a win there would have put him squarely in title contention. Same thing with a win over JDS would have done. Now that fight is sc****d and in steps Greg Hardy who is doing the UFC a solid due to another outcome of his that went south. As long as Volkov isn't overly disappointed and not take this fight seriously he will have an easy win. Being the fight is in his home country I doubt he fails to show up and he will sleep Hardy who is in over his head here. The odds are actually not to bad. I think this is free money. Volkov by KO.

"Aiming to be professional sports handicapper"

I just can't pick a 39 YO who is 2-3 in his last five with a loss to Villante in the mix. It's twilight for Herman at this point, and while I'm far from sold on Ibgramov with such a shallow amateur record and basic striking, he should have more than enough to deal with Ed assuming he survives the first round.However whether or not he can do that or not is a legitimate concern. Ibragimov is very, very hittable....I think if Herman does win it will be from a Knee followed up with ground work in the first.

I took Imadaev initially but ultimately I  changed since I don't get the hype. He's a fairly flat footed loopy puncher with some finishes, but there's a lot of openings in his guard, I don't think he has the wrestling to control Roberts, who has better TDD than he's given credit for, and is absolutely a better offensive striker who is much more mobile and has  far better footwork. I can see Imadaev  getting worse than he gives in this one.

Not sure why everyone is so high on Gamzatov. Yes he's undefeated, but that's like being high on a compactor for being 150-1 on suzukis. Gamzatov does have power, but he is as predictable as a 90's era Mills and Boon Novel and his punches come by dial-up. This is a great fight for Abreu to win, because they're both low output but Klidson has better shot selection and has subs if he gets it in the right spot.


I'll be brief; Popov is a lunatic Tartar who is almost certainly going kill Grant, bottle his soul, make jerky from his remains and a saddle from his hide. The question isn't whether or not **** is imminent; it's a question of which orifice. I'll take him by a mercy-kill sub but a TKO wouldn't shock me either.

The more I think about this fight, the more convinced I am that Roberson is going to end Roman's life very quickly, and very brutally. Firstly, Karate is horse **** and a terrible base for fighting almost all of the time. Secondly, Roberson hits hard--really hard, and he isn't afraid to come forward and exchange. Does Roman have enough power to really threaten him? No. Does he believe he does? Yes. Does this mean he'll trade? Yes. Because he's not a grappler. Roberson gets the finish within one.

I guess that surname carries a lot of weight on Tap because there's simply no way on ******* God's green Earth that Nurmagomedov should be such a heavy favorite here. If you're thinking he has the wrestling and sambo chops of those other nurmys, you're going to be disappointed. Another Russian prospect with an impressive record...until you look into it and have seen him fight. Zawada is a much better fighter than everyone Nurmagomedov has fought, and he has lost and drawn to much worse fighters. Might wanna check out what happened in his last fight, and against who.

Ufc Free Fights HD uploaded yesterday for those of you who maybe haven't seen it yet ?

Stupid dana doesn't want to book the best fight in Russia between Rusev and Bobby Lashly. I personally pick Rusev because Lashley faked an injury because he scared and I see Rusev tapping him with the Accolade after super kicking him in the 11 minute