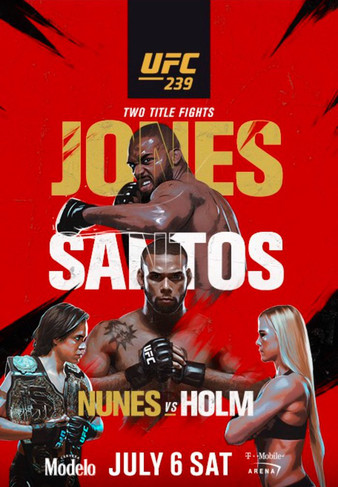 If I could talk to Jones I'd tell him to embrace the dark side. Stop pretending u found Jesus and start going stone cold Steve Austin on everybody's ass. Conor McGregor level self promotion.
"And that's the bottom line cause Jon Jones says so. I'll run over pregnant white women whenever I want!"
How ******* entertaining would that be.

@Freemoney Ahhh you're goood brother.. I was just laughing at Brucey's analysis of Jon Jones. Idk. Is it ok to despise someone AS THE PERSON THEY ARE, but reeaaally enjoy their fights and even give respect where it's due (Only talent-wise really)

Until they lose Jon bones Jones and khabib the eagle nurmagomedov are amongst the greatest warriors on all of planet earth. And no mear mortal can defeat them.

Would you throw Khabib into the G.O.A.T. talks @Freemoney? Or maybe even just LW GOAT?

I think Khabib Nurmagomedov is the GOAT at Lightweight in the UFC.

@bruce you forgot to mention Jones' amazing wrestling. He didn't get that from steroids.

@Free I did mention his wrestling, because its his only skill. But you're right, all those things you said are technically true, but I just don't care my friend. My pinky toe is more talented than Jon Jones. I used to beat up dudes that weighed 75 more pounds. 285 HW limit. I would squash Jon like the pathetic bug he is. Why another man hasn't done that already is beyond me. It eats at me. Jon shouldn't even be alive. Let alone still fighting.

I don't know of a man that COULDN"T end Jon Jones in the street with his bare hands. Fact. In the real world, Jon is a 6'5 janitor. Them long giraffe limbs would snap so easily.


Also @Free, I AM picking Santos via 2nd round TKO for now :) and agree 100% that if Jon embraced the fact that he's worse than Hitler and Jesus would never accept him I would be much more lenient.

Clear emotional bias. Jones is the best to ever do it, despite what a scum bag he’s been. He’s rolled through the competition..PERIOD.

@brad I'd put any undefeated champion into the goat talk.
I would seriously consider

I'd say these three are the only real candidate s
The first two being undefeated and GSP avenging his losses.

I'd also say ugly Tony and adesanya but those picks are completely bias.

yep cuz being emotional & refusing to give Jones any respect is the only way to beat him. I practice what I preach my friends.

What competition? He's literally never fought an opponent that was in their prime. Not a single one.


It takes a monster to defeat one and my mentality is the secret to conquering that mountain of PED's and ****** boxing that is Jon Jones. Attack his life, his family, his limp noodle, his entire bloodline and watch him squirm & look for the door. He's a f*cking coward and I want his soul.

"this guy TKO's people, when I knock them out, they don't freaking move"-Thiago Marreta Santos

Jon has fought a bunch of legendary names during his career. NONE of which were in their prime. Most of his opponents aren't even around anymore and the other half are even better today.

The carousel of young, devastating LHW's we have now WILL defeat Jon Jones. He will be KO'd, its inevitable.


and when he does, I will email his mother & children every single freaking day to remind them.

Joes beaten everyone and ducked no one.
But I’ll grant there’s some truth.
Being a fighter is like being an actress. By the time u get famous u are maybe 28 and already your ability (looks) is already in decline.
Surely John won’t win forced.
But Thiago like Johnny Walker and the rest is one dimensional.
They’d get nowhere near a title shot Cept 205 like over 205 is just nowhere near as skilled as divisions where fighters must be complete.
Jones has little punching power so he can’t do everything but he’s still very good standing at takedowns and on the ground. I hear in the real world he’s very arrogant (tho I don’t know it’s true) but as a fighter he never drank his cool aid like the other legends Conor and Ronda.
Jones fights the right fight to win. Whereas Ronda had so many fans she trained with and coaches telling her she can box that she imploded before holly ever even hit her.
Jones in fighting is humble. He will not stand with Thiago where he MAY win because if he gets too he knows he WILL WIN WITH elbows that will devastate his opponents til he gives up the choke.
Frankly. Brown belt or no Thiago seems defenseless on his back and I’ve seen him taken down by guys likely spicely.
How exactly will he stay up Vs John?
With as hard as his kicks and johns puny legs he would devastate Jones legs fast.
So he’s screwed caus ethat means John will takes him down quickly.
Santos has a chance to ko John in the 1st 6 minutes AT most. I know it’s the most obvious prediction but tho santos has suck power I give him 1 in 8 or so. But that’s his only chance.
My other prediction is that just like with Khabib... whoever faces John after his we are gonna hear THIS guy has the best shot at beating John (Khabib)
I heard that when Khabib faced Johnson he finally was facing a wrestler boxer then Vs Barbuda this guy had the TD defense and power. Then EVERYONE said Conor has the strait left and kabob comes strait in.
Every time he fights Rogan talks himself into thinking this guy can win.
How anyone can say that Khabib hasn’t beaten better strikers and grapplers than Dustin I cannot imagine.
And now I just heard my students tell me Thiago brWls/ he doenst pace himself and wait for mistakes so this time John is screwed.john is so damn long for a guy who mostly faced 185ers that Thiago will feel he’s way outta range and get hit and Thiago will then rush in swinging and it’s over. He’s n his back getting murdered.
Only way high loses is luck + power.
Happens.
But never to John

you bring up some great points @Bill


Clearly pointed out my biggest fears. 1, Can Santos even get back up. 2 will he actually commit with his strikes to neutralize the range and 3 what happens after 3 rounds...


I just want 1 spam-combo from Marreta, before or after a powerful kick...that's all he needs IMO.

Jones will fling his fingers & arms out straight before back-peddling like a little rookie b*tch or he'll duck under/change levels. In those 2 defensive reactions lies the key to Jones demise. You must bet on a number then execute perfectly.

Didn’t beat anyone in their prime is laughable and emotional. If true, not his fault or problem. He didn’t fight “Pride Shogun” but did destroy UFC champ shogun but then beat every #1 contender in his division put in front of him. At about the two ass whooping on Cormier and Gus2x. He ran through a who’s who who were all top 5-10 maybe at the time. Roid Vitor who just finished Rumble in round 1. We get it. You hate him and what he stands for. I respect you for that. But come on, son. You’re only lying to yourself.

That will be me last response in the argument. It’s a fools debate.

You’re all entitled to your own opinions, even the silly ones.

Gus retired after getting beaten up by who again?

DC is Jones best adversary and in the second fight DC was doing better but blah blah blah.


@Swain you just admitted that my statement had truth. "if true" it is true, no emotions needed in looking up the history of his opponents. They were either slightly past their prime or too young & dumb to stand a chance, barring DC. Much of that is credit to Bones. If you think this is a competition, he will smash you. Facts.

I've watched Jons entire career like most of yourselves. I know who he fights, when he fights, how he fights and the results. To @Bills point, 100% Jon fights to win, there's just about no way in hell he tries to brawl with ANYBODY let alone Marreta. And Jon wins every single time. There is no denying that. But those wins don't mean a FOOKIN thing to me and it shouldn't mean a thing to his current opponents.

Jon is an offensive DEMON.

But a defenseless child.

Jon is Achilles. The ***** in his armor is glaringly obvious, but only a certain breed can exploit it. I think Marreta is that breed. I may very well be wrong.

Also, I didn't give Smith a chance. He's an outcast with cardio...that's about it.

I'm not confident in Rockhold or Askren...

Picking Masvidal as of now. The Curly Headed Funk Train is due to derail anytime now.


edit* i'm done with always siding with the favorite when I can't get a better read....plus, i've been doing pretty terrible lately on my UFC picks.