UFC on ESPN 1: N'Gannou vs. Velasquez 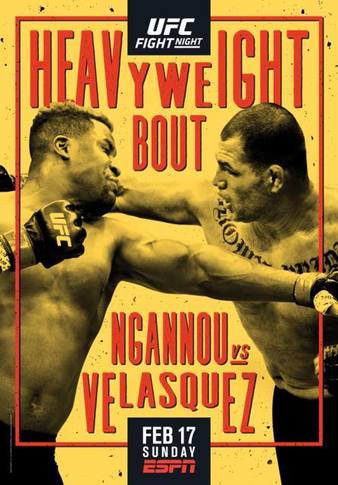 Rivera vs. Sterling
Jimmie Rivera, DEC
Another fantastic piece of matchmaking... Both have great wrestling, both have their own striking style, Aljo maybe a little more tech and quick, Jimmie maybe has a little more pop. They're both pretty equal to each other.... On paper atleast. Should be interesting to see who leads the dance

Lee vs. Evans-Smith
Andrea Lee, SUB, R2
UFC needs to sign THE OTHER Angela Lee tooo... But This Angela Lee is super talented as well... Ashlee Evans-Smith is a great opponent for "KGB" to make a huge statement. Maybe even take Evans-Smith's arm home as a trophy to mount on the wall like ppl do with their prized kills.

Holtzman vs. Lentz
Scott Holtzman, DEC
Nik Lentz... Maaaan. It's tough. The Carny was one time, a title challenger in waiting. And he's just fallen so far from then. I wouldn't necessarily say HE HAS fallen off the rails, I'd say that the competition has just caught up to him. He needs a win. But that's nooo easy feat vs Holtzman...

Penne vs. Esquibel
Jessica Penne, DEC
Not a whole lot to say about anything here... Not expecting much.

Sanders vs. Barão
Luke Sanders, DEC
2 guys that both pretty much need a win. It's pretty much do or die, I can easily see both guys fighting for their UFC jobs. Luke Sanders has lost 3/4, He's got 1 Win in the last 3 years. That's pretty bad. Renan Barão has lost 3 straight, and his last 6/8. He tooo, only has 1 Win in forever, even longer than Sanders, 3½ years to be exact.. Sooo yeeaaaa. Fighting for their UFC job is very easy to see. Either way. Renan Barão seems extremely unmotivated to do ****, other than collecting a check. And Luke hasn't really panned out in the UFC, but considering that I believe Barão already has 1 foot outta the door, I'm gonna cringe and take Luke Sanders here.

Albu vs. Whitmire
Aleksandra Albu, DEC
I've just realized what inactivity does to a fighter. Especially if your fans are stoners. They forgetta bout you. I honestly forgot about this Aleksandra Albu chick. And it's not like she's been out TOOO long.. But I forgot about her in the year and a half away... Should be a good comeback victory...

I’m a little bothered with the placement of Jimmie vs Sterling. So excited for Kron’s debut also.

I think the last fight on the undercard is supposed to be a Minnie main event. Kinda like they did with cowboy vs hernandez. And by the way your avatar is awesome. it reminds me of the time I got shot in the face by mr. Harlow

remember when Renan was they guy, everyone still plays as him on UFC online ( PS4..) when its bantam. i usually go for Cisco Rivera or "The Evil One" "The Harbringer of the Night and Doom" John Linker

I think Velasquez is gonna do what a champion does and exploit ngannou's obvious weaknesses in wrestling and stamina. I got cain by tko in round 4! But it might happen in three.

Cain will be back Sunday

Hes gonna get Francis and Murder him on the floor similarly to whathe did to Brown, Rondas man

"We all know FEDOR is the greatest MMA fighter ever. Quit living in denial. "

not so sure, he look so terrible againts Werdum and he already get knock 1st round. After one mintues we will be fix on the result

"Wake up in the morning feeling live"

I'm taking Ngannou. At the peak of his powers Velasquez would have steamrolled Francis, but what we'lll be getting won't be that Cain. Dude hasn't fought since Aunt Mabel, ring rust is real, and Francis is a big dude who hits really fast, really hard, from really far out, and from everywhere. Francis by KO/TKO within two.

I'm exited to see Cain back. Guess the only question is how is he gonna look and will Francis be able to stop the pressure and takedown. I got Cain by Decision.

Vick vs. Felder
James Vick, TKO, R2
This one is a bit surprising. I think Vick has exactly the skillset to defuse Felder. Still this might be an epic war. Also Vick should be a welterweight.

Calvillo vs. Casey
Cortney Casey, DEC
Wondering if Casey is secretly slightly better than people think. Her last 3 have been against some of the best gatekeepers in the division. Then again, she might just get pounced on.

Caceres vs. Gracie
Kron Gracie, SUB, R2
Odd fight, potentially entertaining. Seems very very likely that Caceres gets subbed, but we might see some creative striking before that happens.

Barberena vs. Luque
Vicente Luque, DEC
I think they should team up and fight Leon Edwards together. Just kidding, this is a great fight.

Penne vs. Esquibel
Jessica Penne, DEC
not sure i understand why this fight is happening at all. Penne at her best beats Esquibel for sure but at this point who knows.

Velasquez vs. N'Gannou
Francis N'Gannou, TKO, R1
Cain has been out of action for so long, and his last victory was over Travis Browne - who wasn't exactly close to being a contender like Francis is.

Vick vs. Felder
James Vick, DEC
James Vick could probably keep this fight at range and potshot his way to victory.

Calvillo vs. Casey
Cynthia Calvillo, SUB, R1
Casey's takedown defence percentage is a little suspect, and Calvillo can definitely punish her for getting taken down.

Caceres vs. Gracie
Kron Gracie, SUB, R1
I mean, Gracie is a submission specialist and Caceres doesn't fight in the most stable manner.


This should be a good back and forth fight. I see both eating shots, but Felder is an extremely hard man to put away. Just ask Mike Perry. He'might drop the first round, but I see him getting busy in the second, getting up in Vick's grill and really putting the hurt on him. Felder has fought and beaten better guys than Vick, who is just meh andf may have won the perry fight if not for the broken arm, we'll never know. His grit, meanness and fight IQ will carry the day.


This fight is going to be breathtaking--breathtaking like a 70 year old homeless man's fart who has subsisted on discounted cat food for over a decade in the smallest carriage on the subway . And not the dry stuff, either. Neither of these girls are UFC material, and to make matters worse, they're both wildebeests. Nothing that they do or are is good to look at it. Just how woeful will this fight be? Well, it deserves an analogy of some detail:


Imagine it's your birthday, and your significant other has left you a special surprise, all boxed and neatly wrapped, on the kitchen table before she has left for work. You've got the day off. This is great. You've been given gifts prior to the day, so you weren't expecting anything else. This is just a bonus.


So you optimistically unbox the thing, and all you can find amongst the leaves of old newspaper used for packing is a single banana. There's nothing else. Ok, you think. Well, this isn't even a good gag. You're fairly disappointed, more so because now you have to pretend in the near future that you thought it was funny. The whole charade is going to be a drag.

You haven't breakfasted,so you decide you might as well eat the thing. So you slump down in your favorite chair, and pull the tab. Imagine your surprise when, having peeled back the skin, you find not the velvety ivory-yellow of the banana fruit, but instead the mottled, patchwork browns of a greasy, nodulated Turd.


There's no way, you think. That's got to be some kind of fudge. So you gingerly raise it to your nose, and take a cautious  sniff. You recoil immediately--the scent is unmistakable; It's definitely ****. Human ****.

You don't scream. You don't rage. You just gently let the bananaturd fall to the floor, walk over to the liquor cabinet, pour yourself a triple, and begin to work through the existential crisis that is considering the implications of having been given a stool inside a banana by the most important person in your life, the effort involved in them doing this, and what it all means.

Octagon size for this UFC event?


I am just trying to improve my UFC predictions.


But does anybody know what size the octagon will be in this event? (small of large?)

Or do the fighters get to see the size of the octagon on the day of the event?


Is there some archive or stats available somewhere for octagon types during past UFC events?

Any help or insight welcomed!

"Humanity is the Devil!"