The fighters are weighed in and we had some shoves. T'was crazy.

Prelims kick off on UFC Fight Pass at 6pm ET before switching to FS1 for the rest of the card at 7pm. 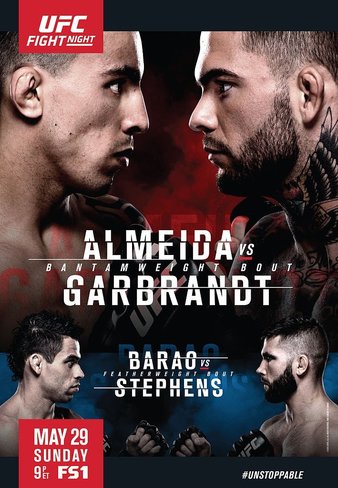 Anyone else find it funny to find burkman looking the smaller of the two. Not that im surprised, but he was even smaller then i expected.

I just watched the weigh ins and one thing stood out for me.

To start the show off, Rashad said on Stephens that "dropping down to 145 has really been good for him". Now in reality, he's 1-4 in his last 5 (in the sole win he was getting beat up and scored a come from behind KO), he beat Elkins which is a great win, but he's basically the worst stylistic matchup ever for Elkins because he's too big to muscle around and Elkins has nothing else in his arsenal. Rony Jason and Payan are solid wins (well, Jason is at least) and he has faced super tough competition, but declaring his move to 145 "good for him" at this point is completely far-fetched, imo (unless by good for him, you mean it saved his job, but I don't think that's what Rashad meant). You need to be way better than 4-3 (on the brink of 3-4) in the division for it to be considered "really good for you" (he was 7-8 at 155, so one might argue it changed nothing for him and put him straight back into "pretty good journeyman" or gatekeeper land where he was before the drop).

Rashad's a smart dude, but this kind of thing shows what the primary directive of these "analysts" is. They value selling the fight or just blurting out the regular casual "isms" over true thought out analysis. I think that should be the UFC and the host's job, not the analysts'. This fight is good enough and evenly matched enough to sell without disregarding reality to do so. There are a LOT of points you can hit regarding this fight that aren't Stephens' featherweight record (which is pretty good given his level of opposition, but not a HUGE selling point for me).

Yaay a fight card on a sunday that i'll actually be able to watch whoo hoooo!!

alright let's get it on

easy winning for chris rocha he is complete martial artist

"we really out here"

God, these two are going to gas out before this round ends. Please end before the 2nd. Please please please. I

Both guys are throwing some hard shots to start off.

10-9 Milstead but he's getting by on quickness and athleticism. De La Rocha has more varied offense.

Tough round to score.  Going to say 10-9 Milstead but it could go either way.

Not the best stoppage but he was getting the **** beat out of him. The Homer Simpson defense can only take you so far

what a lame stoppage jesus crist