The fighters are weighed in, and this **** is actually happening!!! The whole main card stayed intact!

Prelims kick off on UFC Fight Pass at 630pm ET Saturday night before switching to FS1 at 8pm. As always, the PPV main card starts at 10pm.

Here's hoping we get something to top or rival UFC 189. 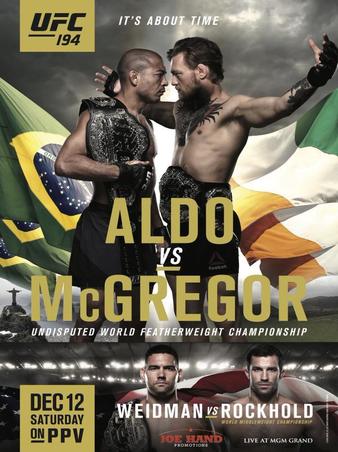 The Rock predicted this months ago

"Finally.. The ROCK Has Comeback to... TAPOLOGY!"

People that refuse to get that what he does is more or less the only way to maximize profit in this sport need to chill. These guys put everything on the line for chump change, if you listen to Conor's more intimate interviews or how he speaks of every person he's not going to potentially fight you'll easily see there's no real disrespect, it's psychological warfare and next level fight promotion. He's both aggressively messing with his opponent's heads to get them to fight out of their comfort zones and also trying to be as big as he can in the short time he's got on the top of this sport.

We complain about boring champs, and then diss the one that isn't. We want our champs to be respectful but won't buy a Velasquez or Mighty Mouse PPV to save our lives. Anderson ******* Silva, painted masterpieces of violence in the cage and couldn't sell PPVs until he had a grudge fight with Vitor or Chael Sonnen started promoting his fights. And on the flip side, a fighter who's skillset would've left him a blip on MMA's history in said Sonnen is one of the richest guys in the sport and has a great post-fighting career. So if you're buying it, don't complain about it.

You've got a guy here who's got the complete package, amazing skill AND a larger than life personality along with a true embodiment of greatness. What would you have him do? Play nice and then beg people nicely to buy his fights? Say he wants to go to Bellator every time his contract is up to get another 5K/5K on his contract every 4 years? Jose Aldo has been doing that for years. He's one of the best fighters to ever grace the planet with his presence yet has never made it into shared PPV revenue zone. If people want respectful champs, buy their ******* fights, but since everyone only seems to buy grudge fights, don't turn around and complain when someone becomes that person.

I know that if I had the opportunity to turn hundreds of thousands of dollars I get for putting my everything into something into tens of millions I would do the exact same thing.

Well the good thing I can take away from this is I'm 7-0 on picking Yoel Romero's fights now.
My Pick History: Yoel Romero 7 Predictions  |  7 - 0

@yoss  I get that he does it to maximize profit, I'm not clueless.  But the way he goes about publicly diminishing every fighter he talks about is ******* disgusting and I refuse to watch another one of his fights, even if it is against Frankie Edgar.  Because believe it or not, I actually value a little thing known as sportsmanship; which is something McGregor clearly lacks. I don't give a damn if he is the second coming of Jesus Christ, he represents everything that I hate about the direction MMA is heading and I won't pay another dime to watch him fight.  I got into this sport due the professionalism of the athletes involved and the bushido like code of respect fighters had towards one another, not this prizefighting/pro wrestling ******** McGregor does.

I would rather watch a person like Cain Velasquez fight, because at least he treats his opponents with some semblance of respect.

@Yoss with one of the best posts of the year. Preach.

You don't have to like the man, but give props where it's due. Aldo will be back, and he'll be contending for the belt again, whether it's against Conor or Frankie.

Not sure if anyone had this on their live feed, but mics picked up Rogan speaking to the producer during Aldo's announcement.

He was clearly making some insinuations regarding Aldo's post-USADA physique. I'm interested to see what RDA looks like next week.

Weidman was also tiny in this fight compared to past fights.

Maybe both shrinkages were due to the IV ban. Who knows?

IDK, Skellitor, I'm reading Yossi's post a bit different, I always knew he was a ******.  That's why he's the highest un paid picker on Tapology.

GreenHornet, the term applies more to pro wrestling than MMA, but you are a huge ass mark. That is all.

That's cute. You can keep wanting guys who are trying to hurt each other to be super "Bushido" respectful all the time. Just remember how the Gracies, who generally seem to be a family of self-serving *******s, were involved in the creation of the UFC. Remember how one of MMA's earliest big feuds was Tito vs. Ken and they both trash talked each other constantly, and Tito was more disrespectful than Conor if anything since he kept talking **** after the fight. Remember how Chael Sonnen got a title shot coming off a loss because he talked **** and more people bought it than the Jones-Gustafsson fight which was 10x better matchmaking and 500x more competitive.

@PilroyChoke  I don't care.  That doesn't apply to me, the individual fight fan that has his own opinions and feelings about the sport.  And I personally don't want that ********.  I'd rather watch Jones vs Gustafsson, a match where both competitors were the elite of the elite when they faced off, than someone who used his mouth to weasel his way into a title shot.

"Endings are sad, beginnings are scary...but it's the middle that counts."

To me Aldo looked beat as soon as he stepped in the cage, he looked broken... As soon as the bell rang he was tight & clenched as **** shuffling his hands at 3000 mph, he looked panicked..... Even so I didn't think McGregor was gonna put him out straight away but either way I think Aldo looked like he was just waiting to get KO'd.

There was a lot of commotion regarding Aldo being drug tested leading up 189 fight & then he pulled out last minute with that 'Rib Injury'. I can only speculate but with McGregor also saying to Mendes after their fight "You're a legend for taking this fight on short notice, Aldo is a juice head *****" It certainly raises my suspicions.

"When you can't see the angles no more, you're in trouble"

Conor was in Aldo´s head this whole time (from the ufc 189 world tour, maybe even before until the fight itself) and it showed.

"Endings are sad, beginnings are scary...but it's the middle that counts."

I thought Rockhold looked awesome. I new he could do it. He seems like a scary champion the way he comes off thinking he had a bad performances after beating Wiedman down.  He just going to keep getting better. I think he completely right about Solider of gods chances against him.

I don't think Romero has much more than a punchers chance against Rokchold, if Weidman was gassed by the end of the 3rd Round Romero will gass by the end of the second if not sooner. he is very strong and explosive, but Rockhold has much better technique and is faster. I wanted to see Luke vs Jacare II, but Romero the cheat got the *win

@skelliher  Sherdog did an article about Weidman prior to UFC 194.  He trimmed his frame down on purpose so that he could make weight easier.  Before the IV ban, Weidman allegedly had to cut at least 32 lbs to make weight. Prior to his weight cut for the Rockhold fight, Weidman's weight was at 193 lbs.  So yeah, I would argue that Weidman was a physically weaker fighter on fight night than he was against Belfort, Machida, and Silva.