Shamar Tweeted that Mach was struggling to make weight and they agreed to a catch weight, but again Mach failed to make it and the fight was off. No announcements were made of this and a last minute opponent for Mach replacement was made on fight day.

In the end it didn't matter because Mach still got KO'd by Korean Jae Suk Lim.

No idea why the European fighters who were fighting Yuki Niimura and Yuki Okano didn't fight either.

What's even stranger is that Niimura ended up fighting an unknown fighter named Omar Darvish who there's no background info available of and he's not even affiliated to any gym.

Also Okano ended up fighting Daryl Lokuku who fights regularly at lightweight in DEEP, but who probably walks around at 170 lbs or higher because he's missed weight on DEEP cards in the past, so that's not much of a stretch. Plus Daryl fights and trains in Japan, so he should've been prepared and rested. 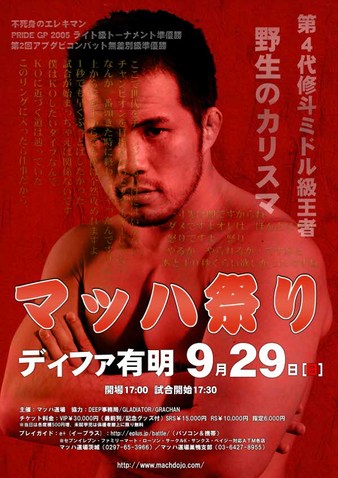 
Why does Mach still try? He's so lazy these days it's a joke.

From Shamar Bailey's FB page about this weekend's debacle!

The thing about doing what's right & holding others to that standard is, no matter how much others try to spin it or slander your name, what's right always prevails. Whether you're on the other side of the globe or in your backyard:) I'm confident in my decision this weekend, and life goes on.

Sounds like Shamar would have won regardless of how much weight he gave to Mach. Unmotivated Macj is unmotivated......

The promotion offered Bailey a 50% increase in his purse for the fight, and they even said they'd give him half of his purse just to explain to the fans what happened in the ring.

You gotta be an idiot not to take that money.

I'm not surprised by all of this.

I'm also curious as to why the European fighters didn't make it to their fights. I wish there was a way to contact them and ask them what happened.

I really can't understand Shamar turning down the fight, you went all that way so what's a few pounds? Surely he knew Mach was way over the hill and that he was still smaller than Shamar even though he weighed more. Instead he threw a big hissy fit and left, if he didn't get paid that just makes it all the more irrational.