Chael Sonnen will not retire. Calls out Wanderlei Silva.

Did @Sonnench just call out @wandfc? Pretty sure that's what just happened. Everybody in favor pls RT. 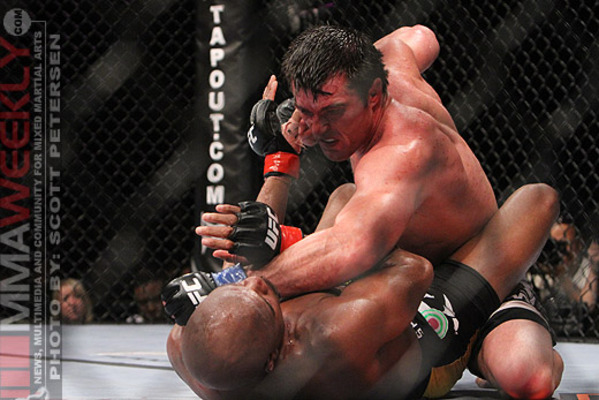 I don't think this fight has anything to do with Wand at this stage of his career ... he's spending 15 (or 25) minutes on his back getting pounded.

It's going to be frustrating to watch if you're a Wand fan.

I think Chael should go back to middleweight and serve as a measuring stick for title fights - you have to get past him to fight Anderson.

My guess is, no middleweight today except for Weidman (maybe) can beat Chael.

That way Anderson could be free for the super-fights he wants, instead of people calling him out and him either fighting them for weak-ass PPV money (in comparison) or them saying he's ducking them (pfffft), he can send them to try get through Chael and in the mean time he can fight GSP or Jones.

He should just retire. He has said multiple times in the last 2 years that if he doesn't see a possibility to hold a championship then he sees no point in fighting.. He's not gonna win a championship. He's made a ****load of money in his last like 6 fights, it's not like he needs the money at this point. Plus, according to Dana, FOX loves Chael Sonnen. So he will likely be doing stuff for them for a while.

Said on the other thread. I may be wrong but have a feeling Wand will KO Chael.

On the other hand, trash talking will probably escalate to a new level before this fight.

"“I firmly believe that any man's finest hour, the greatest fulfillment of all that he holds dear, is the moment when he has worked his heart out in a good cause and lies exhausted on the field of battle - victorious” - Lombardi"

Wanderlei Silva responds to Chael with a simple 'Let's Go!'

and then... it begins

IN YOUR CASE, WANDERLEI, ISN'T IT "REAL MEN MUMBLE FACE TO FACE?"@wandfc

Isn't THAT what you mean, you fool? @wandfc

Chael Sonnen is just getting ridiculous. He tries so hard to sell a fight, it worked for a while, its just getting old now. Fact of the matter is, him and Wanderlei were in a van, Wanderlei was talking to him about how he doesn't like how disrespects Brazil .. Chael had nothing in response. I hope he continues to disrespect Wanderlei, then Wand will have more of a motive to go whoop his ass in the cage.

^^^ Yes a thousand times yes, I guess people forget that Chael has 12 sub losses and 4 TKO losses, Wandy will eat this no hearted guy up for breakfast, he would not be able to be LnP'd without getting subbed or KO'd in 5 let alone 3 rounds, he just doesn't have the heart or fortitude and Jones just showed that. And the van ride proved Chael has no heart and no champions desire earlier on as he cowered away from his antics in front of Wandy because his trolling is "just for show."

If it was just for show then keep up the antics, don't break character. Many people don't like your little show Chael, some people watch you to see you lose, some people don't buy into this WWE shtick and some people don't find you trolling humorous no matter how many times you put up the qualifier "Haha Just kidding I'm hyping a fight man" ...and you could lose some teeth over that and that's exactly why he shut his mouth in front of Wandy.

Wandy by whatever he wants.

I see Sonnen holding Wandy down and Wandy KOing Sonnen equally likely. I'd give the edge to Wandy since you know he's gonna go balls out. Also Wandy's chance of getting finished by Sonnen is pretty low.


That made me laugh out loud, Chael Sonnen will forever be golden.

Chael will absolutely murder Wandy. The only way Wandy wins fights is if people just stand in front of him and brawl, which there is no ******* way Sonnen is going to. Also there is zero chance Wandy subs Chael off his back. Wandy isn't going to have an answer for anything Chael does. We're going to see another one sided beatdown, and once again Chael will be the one swinging the hammer.

lol the bots are getting sneaky

I would hope wanderlei wins the fight but sadly Chael would take him down and grind out the win.

This is what happens when a top flight guy cannot win a title - the UFC has nothing to do with him and he has no where to go. He's like Franklin, Penn and Liddell (to name a few). Fans love to see them fight but are not going to pay to see them lose another title fight.

There's also a danger that these guys (guys who fall short on title shots not neccessarily the names I listed above) are that good, that they can knock off contenders and never have a championship match materialize. Bisping will soon be in this category along with Frankie Edgar.


Even Anderson Silva wants to see this fight bad.

"You don't have to be perfect, just dont be fraudulant"

I love people pretending that Chael is some god.. The guy has so many flaws in his game. He has 1 true strength.. Wrestling. Could he take Wandy down for 15/25 minutes? Absolute.y But he will not finish him. Wandy cna whoop Chaels ass on the feet AND submit him.. You know .. he does have that black belt in BJJ like many other guys who finished Chael had.

Wanderlei has far more advantages over Chael in this fight .. not vice versa.

^ Him being a God has nothing to do with his fighting career...Chael P. Sonnen is immortal.

Oh .. then it will be awkward when Wanderlei Silva quite literally murders him in the cage..

"Fighter by day, Lover by night"