Who Will Gustafsson Fight Next?

Gustafsson will heal up in no time, and he says he's looking to fight ASAP in a five-rounder against someone who will bring him to a title.

In terms of timing, who does "The Mauler" fight next?

Looking at the schedule of upcoming 205 fights, I don't see many guys available right now, but three names stand out to me : Lyoto Machida, Gegard Mousasi and Jimi Manuwa.

Machida is coming off back-to-back wins over Ryan Bader and Dan Henderson. A win over him would surely propel Gustafsson to a title shot.

Mousasi should take care of Latifi without much trouble, meaning they could simply reschedule Gustafsson vs. Mousasi for a summer card.

A win over Manuwa wouldn't really be a title-push for Gustafsson, so I don't think it's likely, but possible.

I say they should beef up an existing card with the Gustafsson/Machida or Mousasi fight, but I have a feeling they want to save him till later in the summer to headline a card instead of using him up in a 3-rounder. 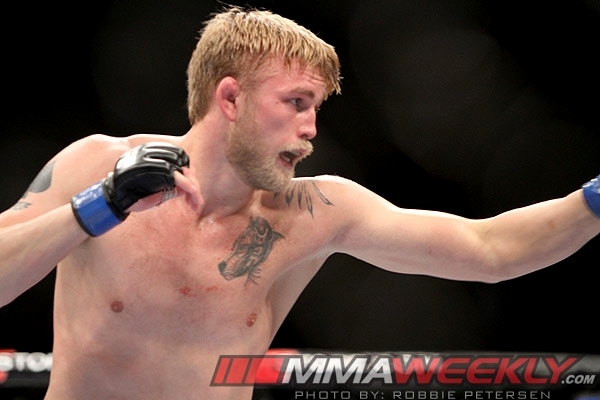 Gegard if he can come out unscathed.  If not, they really don't have an option but Machida unless they want to shelf him for months and months.  I wonder depending on how the next few fights @LHW go, if they don't just give him a title shot this summer.

"All men can see these tactics whereby I conquer, but what none can see is the strategy out of which victory is evolved" – Sun Tzu, "The Art of War"

Lil Nog? Glover if he beats Te Huna? Rashad even though he's coming off 2 losses. A rematch with Phil Davis if he beats Vinny?

Lil Nog is scheduled to fight... Glover wouldn't make sense unless they're going to put Alexander on the shelf for a while. I believe Rashad is also already scheduled.

If they don't want him to fight "soon"... then some of those match ups may make sense.

"All men can see these tactics whereby I conquer, but what none can see is the strategy out of which victory is evolved" – Sun Tzu, "The Art of War"

Mousasi? in a couple of months. Probably could and should headline FOX sports 1.

Rashad is fighting Hendo at UFC 161.

A fight with Glover would only make sense if the UFC doesn't want to continue pushing Gus a future top contender.

I personally have Glover ranked higher than Mousasi in my 205 rankings. Sadly there aren't very many fights out there for him right now. I guess the best case scenario would be for Mousasi to one punch Latifi and then reset the fight up between him and Gus.

Machida. I still think both Machida and Gustafsson each need one more win before contending for the title. Would work out great too. Machida didn't get hurt against Hendo, make that fight in a couple months.

Machida is fighting Jones/Chael winner. This has been said over and over by Dana.

I know this, but Jones will probably not fight until like november/december-ish. Probably time to stick another fight in there.

Jones will probably fight in August/September, he hasn't fought since last September and he likes to stay active.

Gus said he would be ready in a few weeks . I hope they have him fight Lyoto soon for a #1 contender fight . After that hendo fight Lyoto didnt prove he was undisputable #1 and him and Gus are the top two guys coming off wins. and if they do it soon the winner will be ready about the same time as Jones and there wont be any waiting around for a title fight.

@srei: You can't take anything Dana White says regarding title shots as fact ... ever.

I think he will fight Lyoto Machida this summer.

he should fight Machida and they should headline the FOX card on July 27th.

For whatever reason, I wouldn't like Gus chances against Machida.

Actually judging by his last couple of fights, I think he has a lot to improve and he would lose to guys like Rashad if he opted to use his wrestling and not think he was Tyrone Spong and Glover.

I just don't see all the hype behind him yet. Sure he's young and talented, but he has a ton of areas in his fight game he needs to improve in.