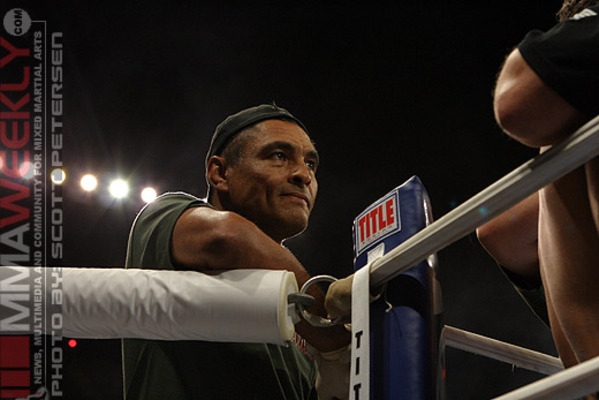 Rickson Gracie is ineligible for regional rankings due to inactivity.
Fighters must have at least one completed MMA bout in the past two years to be ranked.

To die hard fans of the fight game since the glory days of Pride, there is no figure more iconic, more revered, and more contentious than the legendary Rickson Gracie, the generally accepted “champion” of the Gracie family and purportedly its most skilled Brazilian Jiu-Jitsu practitioner.

Gracie, now an 8th degree black-and-red belt in BJJ, is undefeated at 11-0 in sanctioned MMA competition. It is Gracie’s “overall” fighting record, however, which draws the most attention, and is purported to stand somewhere north of four hundred wins with no losses when including all of his amateur, unsanctioned and “underground” scuffles growing up in Brazil (a figure that includes various martial arts tournaments, back-room challenges, street fights and beach fights). Such claims about Gracie, though unsubstantiated, are for the most part regarded as credible.

Despite occasional fan speculation that he will return to fight, Gracie (born in 1958) has not competed in a sanctioned mixed martial arts competition since 2000, and has declared himself retired from the sport. Inactivity has failed to quell an enduring belief among some that Rickson Gracie is still the world’s best fighter, and could return to claim the UFC or any other championship belt if he so desired. To self-styled debunkers of fighting myth and hard-headed realists of MMA, the notion that Gracie remains among the world’s top pound-for-pound fighters is infuriating proof that martial arts still has not rid itself of the pseudo-science and mysticism that characterized much of its development in the 20th century, prior to the UFC’s creation. To these fans, Rickson Gracie’s one-dimensional Jiu-Jitsu based style is a relic of an earlier era in MMA, and Gracie would fail to remain undefeated for long in the modern fight game. Others disagree, and cite occasional firsthand reports of professional fighters training with Rickson that he remains virtually unstoppable on the ground. The debate is a persistent – and to some, persistently annoying – presence in online MMA chat rooms and forums, and has become a sarcastic punchline of sorts among fans who ask, in jest, “Rickson Gracie versus Godzilla? Rickson via armbar.”

There is no question, however, that from a historical perspective Rickson Gracie is one of the greatest fighters ever to compete in MMA. In his heyday he fought with supreme skill and vanquished all comers with a “pure” Brazilian Jiu-Jitsu style that has rarely been equaled. His two armbar wins against Nobuhiko Takada in the main events of Pride 1 and 4, respectively, enhanced his stature among western fighting fans more familiar with the exploits of his cousin Royce Gracie, the winner of multiple early UFCs. However, it is Rickson’s two legendary “pre-MMA” fights in Brazil against Vale Tudo brawler Rei Zulu in 1980 and 1984 that first made Rickson a legend. Zulu was undefeated at the time, and Gracie’s pair of Mata Leon victories (the second in front of a massive crowd in Brazil’s national stadium) vaulted him to legendary status in South America.