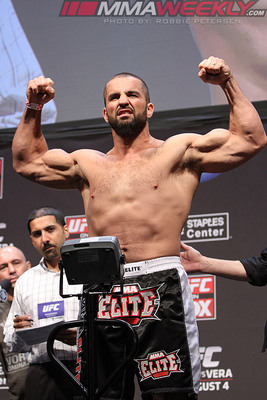 Oliver John Thompson is a British strongman (and former "Britain's Strongest Man") turned mixed martial artist. He made his debut in February of 2009 for the UK-based promotion ZT Fight Night winning his first fight by submission. After compiling a 9-2 record in England, he was offered a contract with the juggernaut MMA promotion UFC. Unfortunately his stint with them lasted only two fights, both of which he lost - to Shawn Jordan and fellow British heavyweight Philip De Fries respectively. After being released from the promotion he would return to his winning ways by going 3-1 in his next 4 fights, his only loss being a decision to the accomplished grappler and future KSW Heavyweight champion Karol Bedorf. After defeating in dominating fashion his next opponent for the Polish based promotion, he was offered a bout against his former strongman competition, Poland's own Mariusz Pudzianowski.

Having dropped 3 in a row, 2 by quick finish, Oli entered IGF's year long World Grand Prix 2015 as an underdog. He would go on to defeat Minowaman, Huggy Bear, and Santo Forte to take the tournament championship.