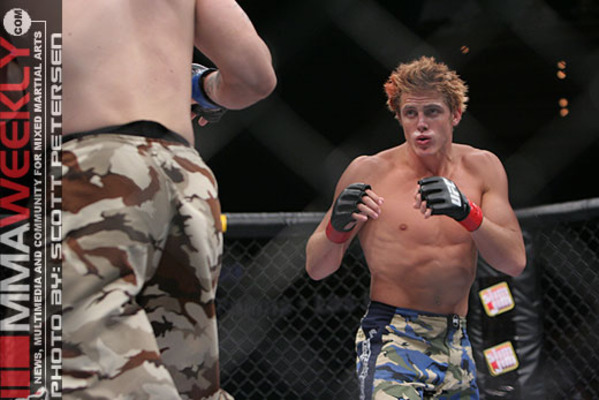 Matt Riddle is ineligible for regional rankings due to inactivity.
Fighters must have at least one completed MMA bout in the past two years to be ranked.

After failing to win the middleweight tournament of The Ultimate Fighter 7, Matthew Riddle, one of the more charismatic fighters from the show, defeated three straight opponents to begin his UFC career, all of them by unanimous decision. He was finished in his fourth fight with the promotion by British striker Nick Osipczak in the third round of a competitive fight, but rebounded with  wins over UFC newcomer Greg Soto  and fellow TUF alum  DaMarques Johnson in 2010 to up his UFC record to 5-1.

Although he has improved his striking by leaps and bounds since his debut, Riddle is still predominantly a wrestler, often taken his opponents down and working for a ground-and-pound finish or a decision victory.

Riddle recently rebounded from two consecutive  decision losses to Sean Pierson and Lance Bnoist with victories over late replacement Henry Martinez and a Submission of the Night victory over Chris Clements. Riddle was handed a 90 day suspension after testing positive for marijuana after the fight with Clements and it was overturned to a No Contest. Riddle would return from his suspension to win back to back decision victories over John Maguire and Che Mills. However Riddle would one again test positive for marijuana after the Mills fight and would be cut from the UFC this time and the fight would be changed to a No Contest.

Riddle was set to compete in Bellator's Season 9 Welterweight Tournament in the Fall of 2013, but after cracking his rib, he withdrew from the tournament and quickly announced his retirement from the sport of MMA on social media. Riddle cited Bellator's inability to provide him with another fight before the end of the year and his lack of money as reasons for his early and shocking retirement. Riddle's situation once again drew attention to the relatively low pay scale endured by the majority of young athletes in MMA.

Matt Riddle has currently been apart of Professional Wrestling since 2015 where he has had a successful career through the Independent Circuit. World Wrestling Network, Evolve, Pro Wrestling Guerrilla, House of Glory, and Revolution Pro Wrestling, are just a few of the organizations that the "The King of Bros" has been in. Where has built up successful experience and became a great prospect for larger promotions. Such as being "Rookie of the Year" in 2016 by Wrestling Observer Magazine.

On August 18th, 2018, Riddle appeared on WWE's developmental brand NXT on their "NXT TakeOver: Brooklyn IV Event where he was announced as WWE's newest signing by the Commentators. He would have a successful debut under a month later at an NXT Dark Show on September 21st, 2018. He is still currently signed with the WWE Black and Yellow Brand and hopes for him making his television debut are very promising in the future.