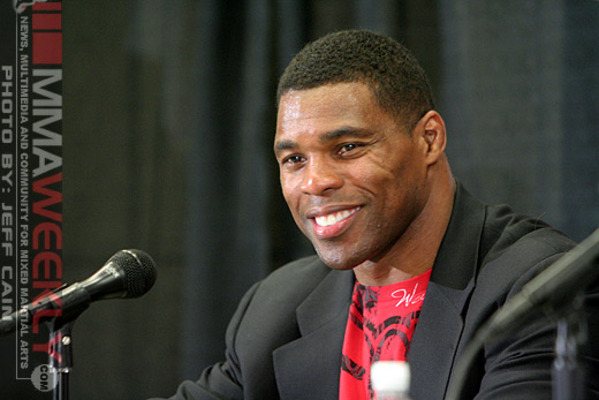 Herschel Walker is ineligible for regional rankings due to inactivity.
Fighters must have at least one completed MMA bout in the past two years to be ranked.

Watch this video interview with Herschel Walker as he talks about improving his overall game.

Watch this video interview with Herschel Walker as he discusses his insane workout routine with Fight! Magazine.

Herschel Walker is a former college football star and professional football player in the NFL and USFL who has transitioned into a professional MMA fighter. On January 30, 2010 Walker won his debut pro MMA bout against Greg Nagy, a fight that was televised live on Showtime under the Strikeforce banner. While much remains to be seen about Walker’s MMA sojourn, he has already distinguished himself from various “spectacle” MMA participants by revealing that he is a lifelong martial artist with a 5th degree black belt in Tae-Kwon Do. And as Walker's football fans have known for years, he purportedly does 2500 sit-ups and 1500 push-ups every morning.

Walker was accepted by, and permitted to train with, San Jose’s renowned American Kickboxing Academy in preparation for his MMA debut, which many took as a signal of Walker’s seriousness and competence in his new endeavor.

Following his victory against Scott Carson in his second professional mma bout on January 29th, 2012, Walker has remained inactive as a competitor.