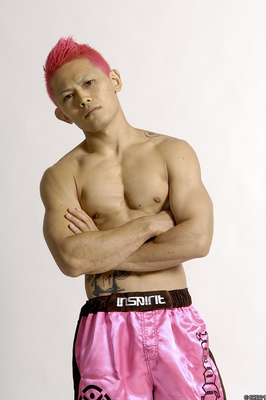 Fighting for a major organization has made Akiyo Nishiura ineligible for regional rankings.

Akiyo "Wicky" Nishiura is a Japanese mixed martial arts fighters born on August 8, 1983 in the Higashisonogi district of Nagasaki, Japan. Wicky is most commonly known for his awkward fighting stance and diverse striking attacks. Wicky also carried various nicknames such as "Kakutoh Saru" which translated is "wild monkey" and "Bohatsu Artist". Wicky fights out of, represents and is affiliated to the STGY gym.

Before becoming a professional MMA fighter, Wicky competed in the 2004 Amateur Shooto 11th Japan Championship where he made it to the semifinals by defeating 2 of his opponents by decision before losing by decision.

A month after competing in the 2004 Amateur Shooto 11th Japan Championship, Wicky made his professional debut in October defeating Takeshi Sato by KO in 0:39 second of the first round in DEEP.

Akiyo Nishiura earned his "Wicky" nickname from the Yokohama Shooto Gym chairman Kenji Kawaguchi due to his movements as a monkey.

He is commonly known due to his died pink hair, pink trunks, various tattoos and body painting he usually has across his midsection.

After losing a unanimous decision to Caol "Uno Shoten" Uno at DREAM Fight For Japan!, Wicky spent over two years away from fighting. He returned in a losing effort against Yuta Nezo at Vale Tudo Japan: VTJ 2nd, where he was defeated via unanimous decision.

Wicky would return to his winning ways less than four months later, when he snapped his three fight losing streak with a split decision victory over Shigeki Osawa at Vale Tudo Japan: VTJ 3rd on October 5, 2013. Wicky would win his next fight as well, besting Ryogo Takahashi via unanimous decision at Shooto: 4th Round 2014 on May 5, 2014.