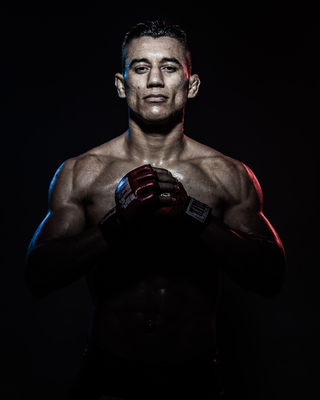 Anthony "The Genius" Romero is a pro MMA fighter from Welland, Ontario, Canada. Romero trains out of  Niagara Top Team, St. Catharines, ON. and Aegis MMA in Oakville, ON. He is the owner of Genius Fitness & MMA in Port Colborne, Ontario.

Anthony Romero competed professionally for the first time on November 18 of 2017 defeating Peter San Antonio by unanimous decision. "The Genius" continued to impress the MMA world starting his career off 7-0 competeing on the 2020 season of Dana White's Contender Series. His opponent was 8-2 Mike Breeden. Romero comfortably cruised his way to a unanimous decision win. Despite this, Anthony did not do enough to earn a UFC contract from Dana White. After his impressive showing on the Contender Series, the undefeated Anthony Romero (8-0) competed at LFA 96 against Zach Juusola (11-6) and won by split decision improving his record to 9-0. His next fight came against JJ Okanovich (7-2) who also appeared on the Contender Series. Okanovich scored the upset over Anthony Romero by split decision. Romero came back to his winning ways beating Nico Echeverry 11-4 at Fury FC 54. On April 24, 2022, Anthony competed against Ken Glenn (10-9) at Fury FC 60 in Houston Texas. He shocked the audience with a brutal flying knee knockout win with only a few seconds left in the 2nd round. He is now 11-1 in his professional career.