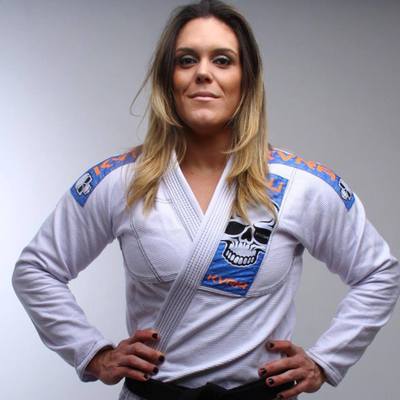 Gabrielle Garcia is ineligible for regional rankings due to inactivity.
Fighters must have at least one completed MMA bout in the past two years to be ranked.

Gabrielle "Gabi" Lemos Garcia is a Brazilian professional martial artist, specializing in Brazilian Jiu-Jitsu and grappling. She is a member of the IBJJF Hall of Fame.
Garcia was born on November 17, 1985. She has achieved three Abu Dhabi Combat Club championships and nine world Brazilian jiu-jitsu gold medals. Also winning a silver medal during the 2013 Brazilian jiu-jitsu Championships in the women +74kg category

Garcia's results from the 2013 IBJJF World Jiu-Jitsu Championships (IBJJF) were automatically disqualified when she tested positive for the fertility drug Clomiphene, which is on the USADA banned list. After a case review, Garcia was found to have not been at fault for the positive test—no suspension was given.

Garcia appeared as a guest coach for Wanderlei Silva on The Ultimate Fighter: Brazil 3.
Garcia was at one point scheduled to face Megumi Yabushita for the Japanese promotion Real Fight Championship. This bout, however, fell through
Garcia was then scheduled to make her MMA debut with Jungle Fight in March 2015. However, this bout also didn't happen.
On November 6, 2015, it was announced that Garcia was going to debut against a Pro-wrestler Lei'D Tapa who was also making her debut on MMA for japanese promotion Rizin Fighting Federation on December 31, 2015. She won the fight via TKO in the first round.
She made her shoot boxing debut on July 7, 2017 when she faced Megumi Yabushita at Shoot Boxing Girl’s S-Cup 2017. The bout was declared a No Contest after twice hitting Yabushita with illegal soccer kicks when her opponent fell to the ground.