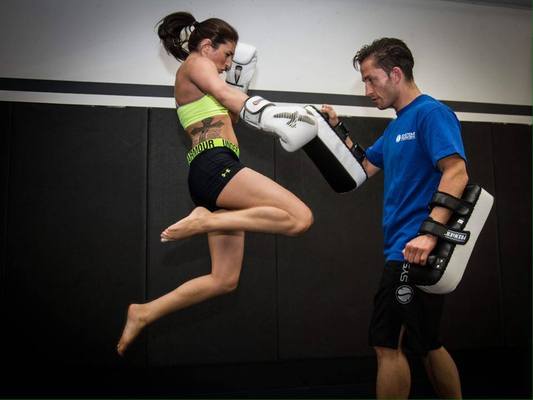 Daria Berenato is ineligible for regional rankings due to inactivity.
Fighters must have at least one completed MMA bout in the past two years to be ranked.

Daria Rae Berenato is an actress / stunt woman / producer and co-host of the popular 'UFC AfterBuzz' show hosted on AfterBuzz TV's YouTube channel -- Oh, and she also beats girls up in cages.

Daria began training martial arts when she was 15 years old and immediately knew she wanted to pursue a career in fighting.

Starting with Judo and boxing and transitioning to Muay Thai and Jiu-Jitsu when moving the day after her high school graduation to coconut creek Florida to train with some of MMA’s finest (India Gomes, Steve Bruno) at ATT.

At the tender age of 18 Daria produced and starred in her first film (The Honour) tackling the very sensitive issues of religious conservatism and homophobia and has since mounted quite the résumé for her young age putting in a nice mix of acting, producing, stunt work and quite a few hosting gigs (the main one being 'UFC AfterBuzz').

On October 11th 2015, Daria made her long awaited (for her) amateur MMA debut in the flyweight division when she beat Allenita Perez at CFL HD 1: Mavericks, No Guts No Glory. Daria methodically broke down her opponent with crisp combinations on the feet, while surviving a TIGHT guillotine in the second round and eventually sinking in a guillotine of her own at the 1:09 mark of the third round.

Her second MMA bout was against her first opponent's sister, Jeselia Perez, in CFL's next event. Again Daria, showing off her crisp and ever so improved striking, systematically broke down her opponent and had her all but finished in the second round, eventually notching a second round TKO when Perez failed to answer the bell for the third round. It's fair to say Daria isn't the favourite subject at the Perez household dinner table these days.

Daria is already scheduled for her next fight at the U of MMA: Fight Night 9 and will face the Jasmin "The Tapout Queen" Pouncy who's coming off a first round submission loss and wants to notch her first MMA win.

Daria signed with WWE after she impressed them on the reality show WWE Tough Enough. she made her in ring Debut vs Nia Jax at a NXT Live event on December 30th 2015. She made her Television Debut on NXT August 17th 2016.