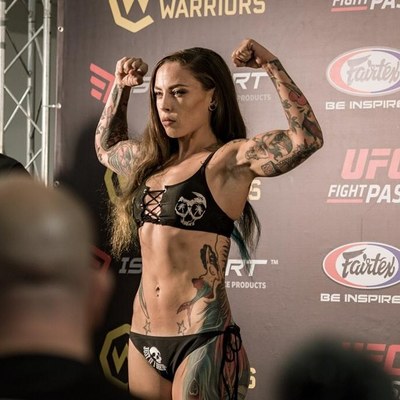 Micol Di Segni (born in Rome, 29 December 1987) is an Italian professional Mixed martial artist and Alternative model for the website SuicideGirls since 2007.  She has been a pin-up model for the punk rock website SuicideGirls since 2007, featured in more than 20 photoshoots, 2 hard cover books ("Hard Girls, Soft Light" and "Geekology"), magazines and DVD ("UK Holiday"). Also known as Eden Von Hell, she has been featured in many Italian TV shows, movies, radio shows (like the Late Show on Rai Radio 2 and Non è un lavoro per donne on Radio Rock), and on the pages of international magazines like Men's Health, GQ, Inked (magazine) and Tattoo Life. Micol made her amateur MMA debut in 2014 gaining the flyweight spot in the Italian National Team. She competed at the International Mixed Martial Arts Federation 2014 World Championship in Las Vegas, conquering a bronze medal after three hard fought rounds in the semifinals against the Brazilian Amanda Ribas. The next year she became the Flyweight World Champion defeating the Swedish Anja Saxmark in the finals of the IMMAF 2015 World Championships. Micol signed with the SouthAfrican promotion Extreme Fighting Championship (EFC) to make her professional debut in October 2015, she faced Danella Eliasov to gain a unanimous decision win. After a second EFC bout at flyweight against Shana Power in June 2016, she started to divide her training camps between Rome and Albuquerque. At the Jackson Wink MMA Academy she had the chance to confront and master her skills with some of the best fighters in the world. After dropping down to strawweight, she went on a 5 fights winning streak, mostly by finishing her opponents before the bell ring, taking her to become the first Italian female to fight in European and international events like Cage Warriors, Brave Combat Federation and Dana White's Contender Series. At the beginning of 2020 the Spanish promotion AFL announced the first female only MMA event in Europe, with Micol Di Segni as the first contender for the inaugural strawweight title.