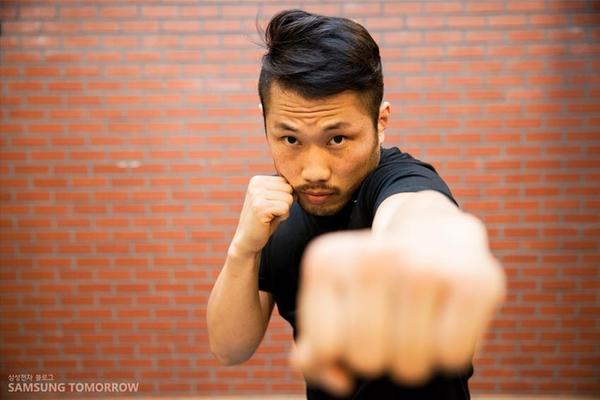 Kim was a highly recruited wrestler in South Korea, receiving many scholarship offers. At 13 he was diagnosed with Aplastic Anemia which required him to undergo surgery for bone marrow transplant. He was told he would  never wrestle or have a career in sports again. For years he was bedridden and weak, the medication he was prescribed to help with this was deemed performance enhancing and he was banned from wrestling.

He took up a job as a physical therapist, through this he met Dae Hwan Kim (ROAD FC and UFC Korean commentator, fighter for ROAD). Dae Hwan was receiving treatment from Hyung Soo and Hyung Soo began to teach him wrestling leading to Dae Hwan offering him a coaching job at his gym.

After 2 years of MMA training, Hyung Soo made it onto the original season of ROAD's Crying Fist show. He gained a lot of popularity through the show for his story and personality and was invited back on the show as a wrestling coach.

His tattoo reads "Saved Life" and under it "Wrestling Saved My Life".

Kim received more notice when news broke of him stopping a pervert that was sexually harassing a girl at a bus stop.

As a kid he was a South Korean national champion in freestyle and Greco-Roman wrestling. He also won the 2013 No-Gi King of Grappling tournament in South Korea.

He was set to make his debut at ROAD 16 against fellow Crying Fist member Park Hyung Geun at Featherweight but was forced out due to injury. He now makes his debut at REAL 1 against BJJ superstar Kron Gracie at a 161 lb catch weight.