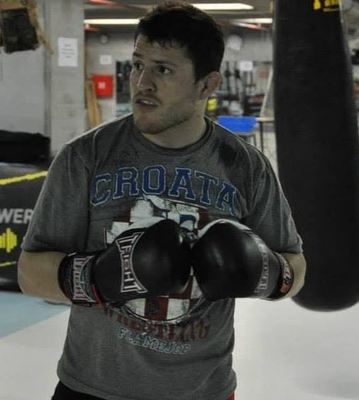 
At the age of seven, Barrio became interested in the sport of greco roman wrestling. He began training in Lokomotiva Wrestling Club, Zagreb. He soon started to win tournaments, which led to him participating in national championships, and then in international events. In Croatia he gained experience by competing regularly with wrestlers from all across Europe. He stood out as a wrestler with great potential.

At seventeen he returned with his family to their home country, Argentina, where he continued with the training activities. He has managed several victories both locally and internationally, Multiple Argentine champion in the junior and senior categories, being undefeated in the 66 kg category. He excelled in international competitions such as the Pan American and South American, taking three medals in the first tournament and two in the second.
He competed in various international tournaments in America, Asia and Europe, and later in the Olympic Wrestling trials in Orlando, Florida, ahead of the 2012 games in London. He lost on points in a close fight against Wuileixis Rivas, in which the winner qualified directly to the Olympic Games.
Francisco accumulated over 100 wins in all his Greco-Roman Wrestling career.
He competed in Croatian Wrestling League, in -74 kg weight category, on 12 October 2013 while preparing for hisFinal Fight Championship debut. In 2nd league round he scored victory for Lokomotiva Wrestling Club, the same club where he made his first steps in wrestling.

Barrio was born in Buenos Aires. In 1994, he and his family moved to Zagreb, Croatia. It was here that he began Greco-Roman wrestling, in which he competed for the Argentine national team from 2005 to 2012. Today, he is a professional mixed martial artist and is signed with Final Fight Championship, one of the fastest growing MMA promotions in Europe.
Francisco is the son of the popular Croatian Brigadier Rodolfo Barrio Saavedra who was in the Croatian Army and very actively involved in the Croatian War of Independence, and idol to many Croatian for help Croatia in the Independence war. Francisco became known popular throughout Croatia, being named on several occasions by the Croatian popular magazines about his private life and have a lot of media attention because he is one of the most exciting local fighters for the Croatian people.