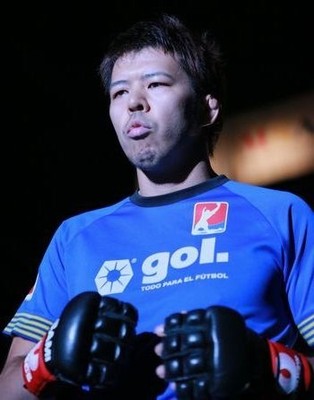 Yuki Ito is ineligible for regional rankings due to inactivity.
Fighters must have at least one completed MMA bout in the past two years to be ranked.

Yuki Ito is a Japanese mixed martial artist from Minato, Tokyo, Japan, who currently competes in the lightweight division. The majority of Ito's fights have been in the DEEP and ZST promotions.

Ito's career would start out with an 0-1-5 record, the high number of draws due to the ruleset used for ZST. He would drop his debut to Yusuke Shimizu, losing via trianlge choke at ZST- ZST 5 on May 5, 2004. Ito's next five bouts would all end in draws against Yuki Takaya, Hirotaka Tomiyama, Yoshimichi Takino, Yojiro Uchimura, and Hidenobu Koike.

Ito's first career victory would come at ZST - Swat 2! on July 24, 2005. Ito would defeat Masashi Takeda with a rear naked choke a little over halfway through the second round. The rest of 2005 would prove to be inconsistent for Ito, as he would alternate wins and draws throughout the year. His bout with Shinya Sato at ZST - Battle Hazard would end in a draw, followed by a first round armbar victory over Shingo Matsuda at ZST - Swat! 3 on October 23.

Ito would start off 2006 with another draw, this time in a rematch with Yoshimichi Takino at ZST - Swat 4! on April 23. He would then win consecutive fights for the first time in his career, defeating Luiz Andrade I at DEEP - 25 Impact with a guillotine choke; this was followed by a rear naked choke win against Seigo Inoue at DEEP - 26 Impact. Ito's last fight of 2006 would be a loss to Kosuke Umeda on December 9 at the DEEP - clubDeepTokyo: Future King Tournament event.

Ito would only compete once in 2007, but he emerged victorious in the fight, besting Masakazu Kuramochi via first round TKO at DEEP - clubDeep Tokyo on June 16.

2008 would be another up and down year for Ito. He would win his first fight of the year on January 14, knocking out Hiroshi Nakano in barely over a minute at DEEP - Future King Tournament 2007. Ito would lose his next fight against Koichiro Matsumoto via majority decision at DEEP - 35 Impact, but he would bounce back to win his last bout of 2008, defeating Takaaki Aoki with a majority decision verdict at M-1 Challenge 5 - Japan.

2009 would see Ito go 1-1-1, his lone victory by TKO over Naoki Matsushita being dimmed by loss to Kota Okazawa at DEEP - 40 Impact and a draw with Sadao Kondo at DEEP - 43 Impact.

The Matsushita win would prove to be Ito's last victory for almost three and a half years, during which he would amass a 0-5-1 record. The lone draw was against Osami Shibuya at ZST - ZST 24, and the losses would come against Jutaro Nakao, Yasuaki Kishimoto, Yasuhiro Kawasaki, Naoki Samukawa, and finally Seichi Ikemoto. All of Ito's losses in this period came under the DEEP banner.

Ito would snap his losing streak in his first fight of 2013, winning his bout against Satoru Takahashi via first round armbar at ZST - ZST 35 on April 7. He would alternate wins and losses for the remainder of the year, losing via TKO to Jung Min Kang at ZST - ZST 35, defeating Makoto Sasaki with a leg scissor choke at ZST - ZST 37, and finally falling short in his last fight against Masayuki Hamagishi at ZST - ZST 38. Ito would lose that fight by knockout.

Ito would only compete once in 2014, earning only a draw against Shinichi Taira at ZST - ZST 41.

Ito's 2015 campaign has thus far been unsuccessful. He would lose to Daisuke Hoshino by knockout at Grandslam MMA 2 - Way of the Cage on February 8, and would then be beaten by Yusaku Fujiisawa at DEEP - Cage Impact 2015 on July 20, losing via TKO in the second round.