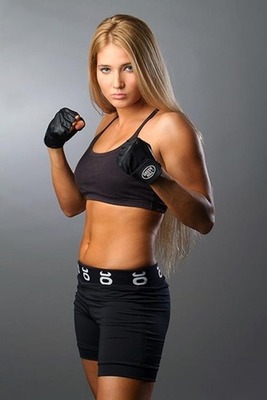 Anastasia Yankova is ineligible for regional rankings due to inactivity.
Fighters must have at least one completed MMA bout in the past two years to be ranked.

Anastasia Yankova (born March 1, 1991) is a Russian mixed martial artist and competes in Flyweight division of the Bellator MMA. Yankova was born in Moscow, Russia. She started training in Kyokushin Karate from the age of six to fourteen, inspired by childhood fascination with "Xena: Warrior princess" on TV. She took a few years break from training to concentrate in school and getting into college. She started her training in Muay Thai after a Muay Thai coach at her fitness gym invited her to join his Muay Thai class, and not long after, she started competing in kickboxing tournaments. She later transitioned into MMA after being a Muay Thai Champion. She often trains at American Kickboxing Academy (AKA) in Thailand. Yankova has two professional MMA fights in Russia prior joining Bellator with the record of 2-0. Yankova's MMA debut came under White Rex [de], a promotion branded with neo-Nazi symbols. Yankova made her Bellator MMA debut on April 16, 2016 at Bellator 152 in Torino, Italy. She faced Anjela Pink and submitted Pink via armbar in round one. On September 16, 2016, Yankova faced Veta Arteaga at Bellator 161 on a catchweight bout (130 Ibs). She edged out Arteaga with a split decision win. Yankova faced the Greek fighter, Elina Kallionidou, in a catchweight bout (130 Ibs) at Bellator 176 on April 8, 2017 in Torino, Italy. After three rounds of battle, judges awarded the win to Yankova with the score card of (29-28, 30,27, 30-27). Yankova faced Kate Jackson on May 25, 2018 for the Bellator 200 event at Wembley Arena. She lost the fight via unanimous decision. Yankova is sponsored by Nike and she was featured in Nike Russian "Made of..." sales campaign short film.