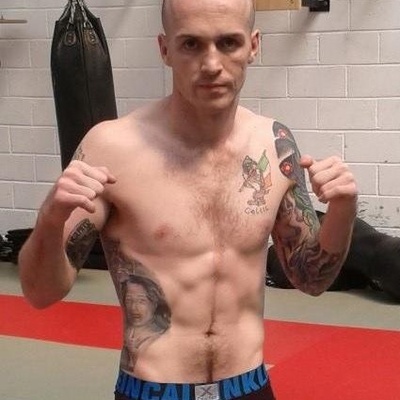 Tommy McCafferty is ineligible for regional rankings due to inactivity.
Fighters must have at least one completed MMA bout in the past two years to be ranked.

Tommy 'The Ghost" McCafferty is an Irish kickboxer. He was born in Letterkenny, County Donegal where he still lives and trains today. His parents enrolled him in kickboxing at age 6 to build his confidence due to bullying. Over the years he competed many times winning titles domestically and internationally. At age 17 he travelled to Dublin and watched John Kavanagh's "Ring of Truth" MMA event.

Instantly becoming an MMA fan after attending, before long he made and won his pro debut in the promotion. 2 weeks later he entered a European kickboxing title bout on short notice winning by stoppage in round 2. He then began a full time kickboxing run towards a world senior kickboxing title. McCafferty was the ISKA World Light middleweight and ISKA Middleweight kickboxing champion, 2008-2012.

After becoming a world kicboxing champion he returned to full time MMA training and kickboxing coaching. He is currently competing in MMA holding belts at featherweight in the Chaos Fighting Championships and Immortal Fighting Championships. He also is head coach of his own kickboxing school "Kickboxing LK" which operates in his home town of Letterkenny, Donegal. He has trained multiple national champions from kids category up seniors/veterans.