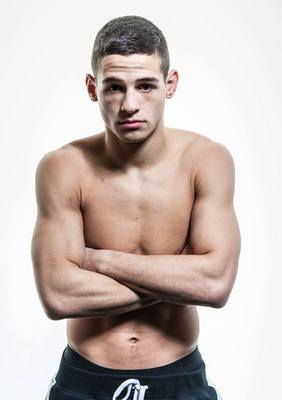 Tom Duquesnoy is ineligible for regional rankings due to inactivity.
Fighters must have at least one completed MMA bout in the past two years to be ranked.

Tom Duquesnoy, born on June 21, 1993 in Lens, Pas-de-Calais, France, is a French practitioner of mixed martial arts (MMA). Number one French since 2013 in featherweights, he obtained the European belts of Belgium Beatdown and Killacam. He is currently the holder of two world belts of BAMMA.

Tom Duquesnoy trains in this discipline from the age of twelve. Meanwhile he practices English boxing, Thai boxing and wrestling before devoting himself to mixed martial arts.

In 2012, he confirms his entry to the pros with four victories for his first four fights and is voted "revelation of the year" at the 2012 MMA French Awards.

He won his first two fights at Killacam in 35 seconds, which gave him the right to fight in the British Association of Mixed Martial Arts (BAMMA), the largest European organization. He becomes the featherweight champion (-65.8kg) of the Bamma for his second fight in this organization.

He was number one in the world for featherweights in Under -21years of age, and is now regarded by the press as one of the world's best prospect in this weight class.

At the end of 2015, Duquesnoy announced that he would pursue his career in the bantamweight category (61.3kg) and expressed his wish to fight soon for the BAMMA title in this division, in order to unite the two featherweight belts and bantamweight. In February 2016, he won his first fight in his new category against Damien Rooney, by KO in the first round. In May 2016, he beat Shay Walsh by knockout in the first round to win the bantamweight champion belt.

On January 16, 2017, he announces that he has just signed a contract of several fights with the Ultimate Fighting Championship. He will compete in the bantamweight category (135 lbs).