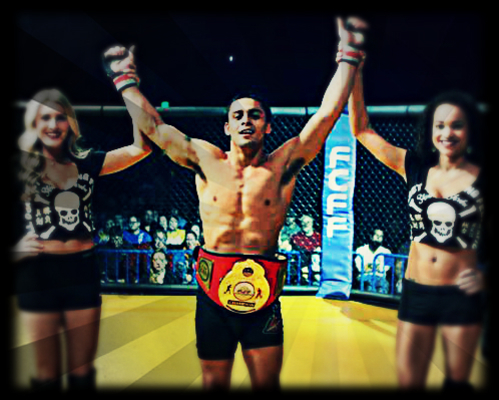 Gustavo Bessa is ineligible for regional rankings due to inactivity.
Fighters must have at least one completed MMA bout in the past two years to be ranked.

Gustavo Bessa also known as “Banzai Bessa” is a Brazilian born, American Raised Professional Mixed Martial Artist with a total record of 12-2. Banzai is one of the top up and coming talents of the Pacific Northwest that has most recently entered the pro leagues. The nickname Banzai was given to Gus by his first MMA coach who described his fighting style as a Banzai attack, suicidal and risky but very effective.

Born in Campo Grande in the state of Mato Grosso do Sul, Brazil, Banzai never had the opportunity to train Martial Arts as a child. Like most Brazilians, he spent his childhood playing soccer. Banzai’s first encounter with Martial Arts was play fighting with his cousins. He would wrestle with one cousin who was versed in Judo. The others had the misfortune of experiencing Banzai’s first endeavor in sparing sessions. Although it was not obvious at the time, these experiences helped cultivate Banzai’s passion for fighting. From then on, Banzai seemed to seek out Martial Arts in some form. His favorite cartoons included Knights of the Zodiac, He-Man, and The Dragon Ball Z series, Yu-Yu Hakusho, Rurouni Kenshin, Pokemon and Digimon (if you’re not familiar with these cartoons they have one thing in common, all include fighting). As an adolescent his favorite video games were Street Fighter, Mortal Kombat, Fatal Fury, Tekken, Marvel vs. Capcom, and later on Super Smash Bro’s, these all posses the same theme… fighting.

At the age of 12, Banzai’s family moved to the United States in search of a better life. At that time, Banzai was still attracted to one on one combat sports, but unfortunately, like many undocumented immigrants in the United States, his parents did not have the means or time for him to enroll in any sport. It wasn’t until his sophomore year in high school that Banzai was able to enroll in sports.

Banzai signed himself up for wrestling, thinking that it would be like WWE, fortunately for him this was not the case. His coach, Doug Samaron a two time all American, took a special interest in Banzai. Banzai eventually worked his way up to place 8th in the state of Oregon his senior year, after only three seasons training. High school wrestling had a profound effect on Banzai. The rigors of training, weight cuts, and competition, gave him an unrelenting work ethic, as well as mental and physical toughness. Although he wanted to compete in college, the financial obstacles were too high. Taking as many as 20 units a term, Banzai eventually worked his way through college and received his Bachelor’s Degree in Business Administration from Portland State University. Like many aspects of life, although the door to wrestling had shut, it opened the door to much bigger and better opportunities.

Now that Banzai no longer had wrestling in his life, he needed to find another outlet to fuel the proverbial competitive fire. After watching an old, high school training partner fight in a local amateur MMA event, Banzai decided that he needed to join a local MMA gym. At the time, he had no intentions of ever competing but six months later he was addicted and was ready for his first bout. Banzai then began perfecting his skills under the guidance of long-time local MMA veterans Jason “the Hitman” Pittman, Nick “the Bone” Breaker, Chris “The Last Man” Standing who are known MMA veterans in the area.

Early in his career Banzai had the opportunity to train and become friends with his current Jiu-Jitsu Coach, World Class Athlete and multiple times Pan Am- No-Gi Champion, twice IBJJF Master's world champion  Diego Gamonal, and was able to sky rocket his Jiu-Jitsu. Until recently, Banzai’s amateur career has taken place entirely outside his home state or Oregon. To fight in the state of Oregon you must have a national MMA ID card, which requires a social security number. Banzai has since persevered through his residency woes and is now one of the most known and up and coming fighters in the Pacific Northwest. He most recently won the Featherweight Belt for the FCFF which is the main amateur circuit in the state of Oregon. Banzai ended his amateur career undefeated with a record of 9-0-0, championship belt from 4 different promotions, 1 tournament belt and 1 super fight belt. He was also ranked #1 Amateur in the Pacific Northwest according to Tapology.com rankings. He is currently the ranked the #20 Professional active featherweight in the Pacific Northwest.