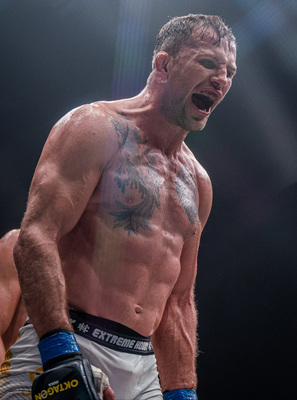 Stephan Puetz is a German MMA fighter competing in the Light Heavyweight division where he is the current M-1 Global LHW Champion. He was granted the title shot against the reigning champion Viktor Nemkov at M-1 Challenge 46 in March 2014 and despite being considered a heavy underdog, defeated the Russian fighter after 5 hard fought rounds. When Nemkov was forced to withdraw from a rematch due to a broken hand, which he sustained in another fight, Puetz fought and defeated the Brazilian replacement Luis Fernando "Hulk" Miranda after outstriking him and finally securing a Rear Naked Choke submission in the 2nd round. His second challenger was the undefeated (8-0, 7 first round stoppages) Russian striker Valery Myasnikov nicknamed "The Russian Hammer". Puetz again successfully defended his title after by enforcing the referee stoppage when raining undefended punches from the mount on his opponent. The three consecutive title victories made Puetz stock and popularity in Russia rise substantially.

Puetz scored his most valuable victory in May 2015. Due to the lack of title contenders in both LHW and HW divisions, M-1 Global put together a superfight "Champion vs. Champion" main event for their M-1 Challenge 57 show pitting Peutz, their LHW champion against the undefeated heavyweight (and Peutz's friend) Marcin Tybura. After defending multiple takedown and submission attempts for two rounds, in the third Puetz started scoring with more and more significant strikes to his tired opponent. Finally he managed to break Tybura's nose causing the ringside doctor to stop the fight at 3:48 of the third round.

Puetz is a big fan of the actor-turned-governor Arnold Schwarzenegger and his nickname "T-800" is a tribute to the Terminator character he is well known for. Puetz also wears the black sunglasses the character is known for during the weigh ins and performs stunts like drinking water out of a gas canister or putting a red contact lens in his left eye paying homage to the machine fighter.